UMass struggles to score in conference-opening loss to St. Bonaventure 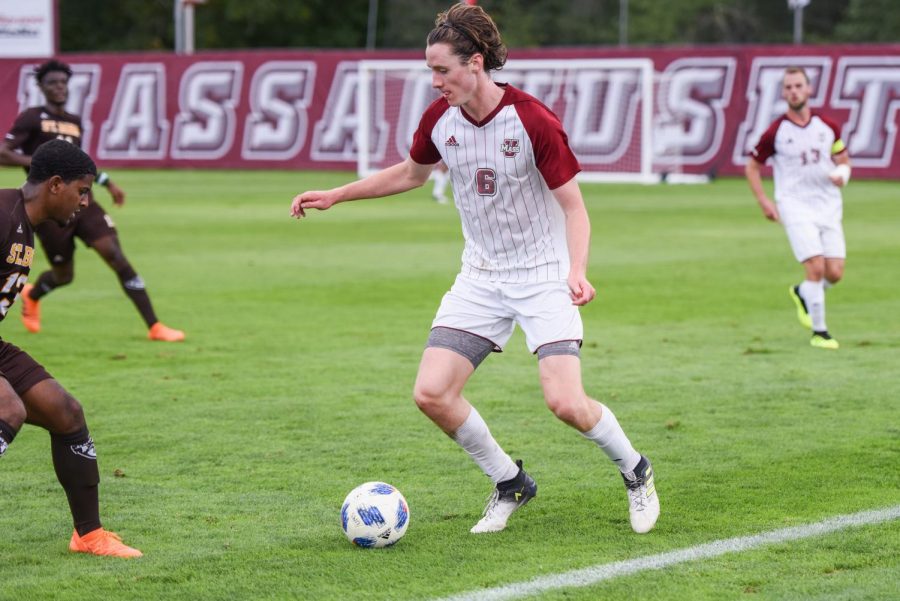 The Massachusetts men’s soccer team struggled to find the back of the net in its conference opener, losing 2-1 to Atlantic 10 rivals St. Bonaventure on Saturday.

“You’ve got to credit them defensively,” UMass coach Fran O’Leary said. “The keeper made a couple of really good saves. We had chances and their keeper came up big several times. It’s very rare that you’ll see, in an A-10 conference game, such a discrepancy in shots. These are all usually pretty tight games. St. Bonaventure played Louisville and held them to nine shots the whole game. We had nine shots at halftime. You’ll have days like this. You just dust yourself off and move on.”

The Bonnies was led by their defense, especially senior goalkeeper Luke Iacobellis, who had a dominant performance in only allowing one goal on 17 tries and saving seven shots.

UMass dominated in every offensive statistical category, but couldn’t find more than the single goal. The Minutemen led in shots taken, taking 17 tries to St. Bonaventure’s two, and also dominated in shots on goal, totaling eight, while the Bonnies only had two. UMass also took 12 corner kicks, a far cry from St. Bonaventure, which took just one.

“I’ve been doing this a long, long time,” O’Leary said. “We came in at halftime and the statsheet was nine shots to one, and we were losing. I’ve never seen that before. Nine times out of 10 if you put in that performance, you’re going to get a win, and this was the 10th time. It’s history now. You just move on.”

The Minutemen made a strong push in the closing minutes of the game, creating many shots and largely dominating the possession battle. This push was largely facilitated by junior midfielder Yosuke Hanya, who created three shots in the box for UMass, which was relentlessly attacking St. Bonaventure’s defense in search of an equalizer, but it never came

“It’s our determination to win,” senior forward Jack Fulton said. “In the last five minutes I think we had like six shots and we were in their half the whole time. We just want to win and we don’t like losing at home.”

UMass also saw the return of A-10 All-Conference defender Konrad Gorich, who played his first game back from injury. Gorich came off the bench in the 35th minute, subbing in for junior defender Ryan Saul and playing the rest of the match.

The Minutemen will travel to Virginia to take on conference powerhouse VCU on Wednesday at 7 p.m.