Minutewomen move to 6-2-0 on the season 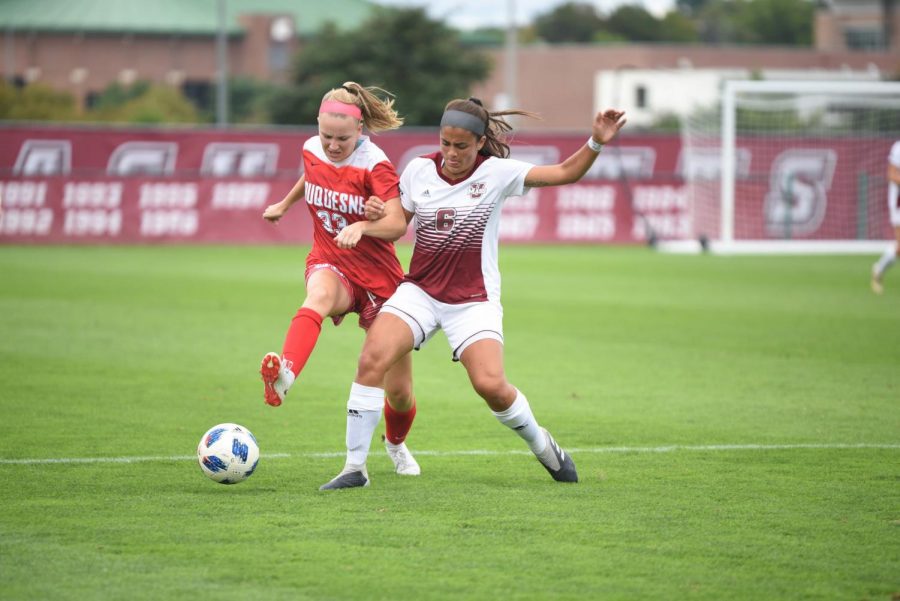 Rebeca Frisk (6) fights for the ball in UMass' 2-0 win over Duquesne Thursday, September 20, 2018. Frisk recorded an assist in UMass' victory.

Strong defense and possession propelled the Massachusetts women’s soccer team to a 2-0 victory over Duquesne in its first Atlantic-10 game of 2018.

“Our game plan worked on both goals,” said coach Jason Dowiak. “We came out a little over confident in the first half of the first-half because we’ve been having success. But once we settled in, the girls started going with what we worked on this week, and we created some really good chances and the girls rewarded themselves.”

UMass maintained possession for much of the first 20 minutes but couldn’t get any clear scoring opportunities in the offensive zone. Despite its lack of offense, the physicality of the UMass defense was able to hold Duquesne from any real scoring chances on its end.

“We’re a tough group of players,” said Dowiak. “We do a lot to help build their confidence for that strength in the weight room.”

The physical play of both sides resulted in a total of 34 fouls being called during the game.

“We’re not afraid of physical contact, but its certainly not what we want to be known for,” continued Dowiak. “But it’s nice when you can be high in possession and still deal with the physical side of the game too.”

In the 23rd minute, the Minutewomen subbed on a group of players to get the offense going, including Bonavita, who had five goals on the season prior to Thursday’s matchup. Off a beautiful cross by Signe Schioldan, followed by an assist from Fatou Barry, Bonavita was able to net one from five yards out to put the Minutewomen on top in the 29th minute.

Heading into the half, UMass maintained its 1-0 lead in part due to the play of goalkeeper Peyton Ryan. Despite five Duquesne corner kicks in the first half, the UMass defense was able to continually thwart the Dukes. Ryan, who finished with six saves on the day, tallied her fifth shutout victory of the season.

Redshirt junior defender Jenna Thomas, who was responsible for many of the Minutewomen’s clearing attempts during the game, acknowledged the confidence of the defensive unit this season.

“We can’t get complacent, but we’re definitely happy with the results,” said Thomas. “We’ve been working hard and staying hungry and we just need to bring this into the next game.”

Starting the second half, the Minutewomen came out looking to generate more on offense. In the 54th minute, a magnificent full-field through ball from defender Dani Sclafani to lead striker Rebeca Frisk to the outside of the box, allowing Frisk to cross the ball to midfielder Jenny Hipp who was able to score from four yards out.

“I just saw Frisk making a run and I usually run through the middle in case a ball comes through,” said Hipp. “The defensive player tried to clear it, but she didn’t. I just saw the ball and the open net and, yeah.”

The goal was Hipp’s fourth of the season.

During the 73rd minute, the Minutewomen neared another scoring chance. A perfect pass by Ari Comendul gave Bonavita a chance at her second goal of the game, but a tremendous save by the Duquesne goaltender kept the score at 2-0 until the final whistle.

After completing his first A-10 win, Dowiak was proud of how hard his team has worked so far this season.

“What’s great is that we have players who step on the field, whether it’s as a starter or not, and they play with that confidence,” said Dowiak. “It helps settle the game down, and we’re able to do the things we want to do like keep possession and being dynamic going forward. Getting that first win in the conference was huge for us, just to keep ourselves in the driver’s seat, but we know we got some tough ones coming up.”

Hipp acknowledged the confidence of the Minutewomen as well, but knows they can’t let it get the best of them.

“Our wins in the past don’t help us win games in the future,” Hipp said, “so I feel like it’s really important to focus on the next game and not underestimate any team.”

The Minutewomen play next at Rhode Island on Sunday at 1 p.m.