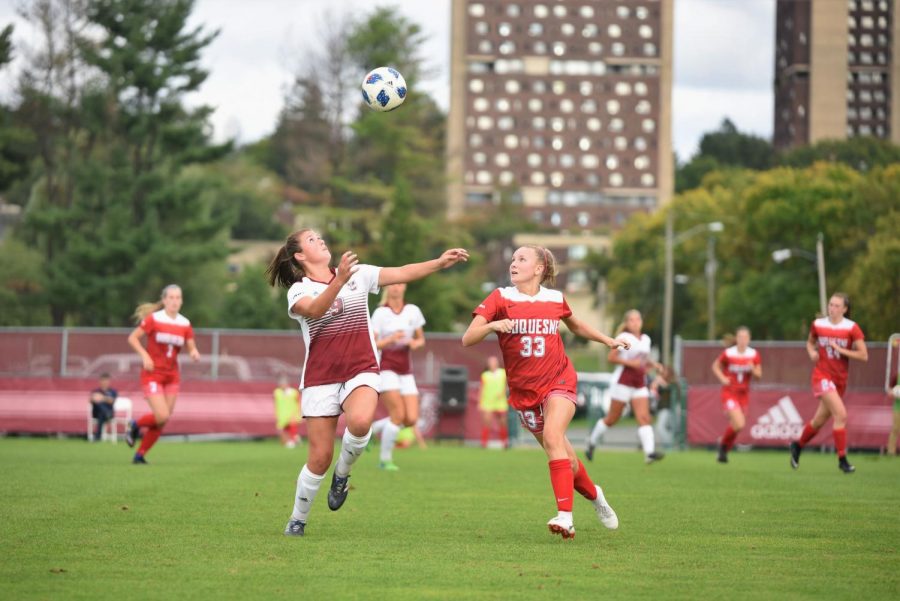 The Massachusetts women’s soccer team will be looking to extend its six-game win streak on Thursday afternoon when they take on St. Bonaventure at Rudd Field.

“We’ve watched a lot of game film of them already,” Dowiak said. “The head coach is a really good friend of mine and he’s a great coach so I anticipate that, although their results aren’t showing, it’s going to be a tough game just like Rhode Island was. Our hope is that we can press them the same way that we’ve had success pressing Rhode Island and Duquesne and try to get some early chances.”

Freshman forward Lauren Bonavita has played a key role in the Minutewomen’s success this season, as she has tallied six goals and 14 points so far.

“Overall, we’re pretty confident,” Bonavita said. “We’re 2-0 in the conference right now which is pretty good and we’re playing well. We just have to come out strong and ready to play.”

Bonavita added that they need to continue playing at this level and focus on themselves rather than their opposition.

“We don’t look at the opponent,” she said.  “We think of ourselves as the opponent and we just come out and play our best and play to win.”

Dowiak is also very pleased with the team’s start against A-10 opponents and in general, as UMass is yet to give up a goal in conference play.

“I’m thrilled,” Dowiak said. “The work the girls are putting in, they’re rewarding themselves on the field. Our results are coming from that work.”

UMass waited until the 73rd minute to put one in the back of the net against URI on Sunday. Dowiak knows that the Minutewomen must get off to a good start against the Bonnies and get on the board early and often.

“The Rhode Island game was tough,” Dowiak said. “We knew they were up against a wall and thought they might give us a tough one. We made it a little tougher for ourselves by not finishing early on. I think St. Bonaventure’s is going to be the same way and then La Salle is bouncing back from a loss this past opening weekend so they’re going to come out for the kill.”

Not everyone believed in the team at the start of the year, but UMass has been on a mission to prove the naysayers wrong.

“All non-conference games leading up we were playing pretty well,” Bonavita said, “and we knew that once conference hit, we’d bring it to a whole new level.”

The Minutewomen have outscored their opponents by a whopping 27-4 margin over the course of their first nine games, and hope to continue that trend as conference play heats up.

Ethan Nash can be reached at [email protected]