The Minutewomen tallied 21 shots in win over URI 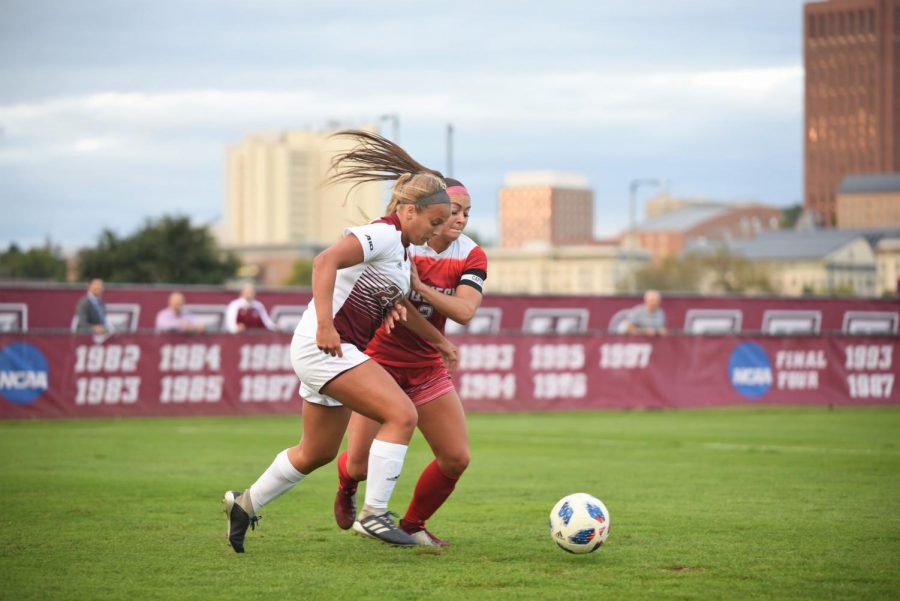 Sophomore Kelly Marra netted the lone goal of the game in the 73rd minute, on an assist from Signe Schioldan, improving UMass’ record to 7-2-0 and 2-0-0 in the Atlantic 10.

“I thought we came out with a pretty good start,” said coach Jason Dowiak. “We created a lot of chances early on, but between their keeper making a couple of really good saves and us not hitting our shots quite enough, we just went into halftime a little frustrated we didn’t have a goal yet.”

By maintaining possession in the offensive zone, the Minutewomen controlled the game. With a flurry of shots coming from the likes of Sarah Beaulieu, Jenny Hipp and Rebeca Frisk, UMass held a 13-2 shot advantage at the half but couldn’t get on the scoreboard.

“We created plenty of good enough chances to score,” Dowiak said. “I think our attacking group is so dynamic in how they move, and we have some great passers in the midfield. We just needed to get a little composed in the box in the final third. But their keeper made some tremendous saves today, and their defense did a lot by contesting our shots.”

UMass generated seven corner kicks in the first half, but the determined play of Rams (0-10-0, 0-2-0 A-10) keeper Haley Brennan rejected each one.

By continually battling for scoring chances, the Minutewomen finally capitalized midway through the second half. After making a series of substitutions in the 72nd minute, including dual-sport athlete Marra, the Minutewomen found the back of the net in the 73rd minute.

“We changed the point of attack and found Mia Carazza to put the ball down into the corner,” Dowiak said. “One of our forwards had a first touch and forced them to kick the ball out for a corner. Signe sent an in-swinging ball right on to Kelly and she got just enough of a foot on it as it came down in between the goalkeeper and the centerback for the goal.”

The goal marks the fourth of the season for the UMass soccer and lacrosse standout. It also marks Schioldan’s fourth assist of the season.

Peyton Ryan had another solid day in goal for the Minutewomen, saving the only shot she faced. The shutout marks her third of the season.

Though they only scored once in the game, Dowiak is taking more away from the victory than just what happened on the field.

Though the preseason polls had them ranked 10th out of 14 teams in the Atlantic-10 conference, the Minutewomen have surely played above their expected potential under Dowiak so far this season.

“We got off on the right foot against Duquesne in the last game and we feel like we can do that often,” Dowiak said. “But it’s never going to be easy. So, if we can reward ourselves earlier in games than we have, we hope that we’ll be even more in control at the end of games.”