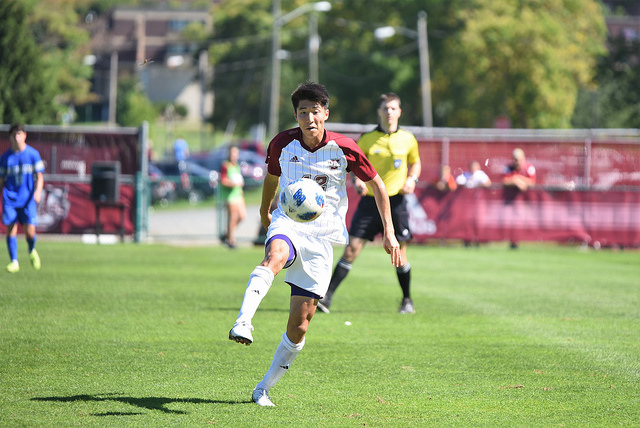 Four different goalscorers will get the credit in the box score for the Massachusetts men’s soccer team’s 5-2 win over Central Connecticut State on Saturday, but none had quite as much impact as junior midfielder Yosuke Hanya.

Attacking from the right wing, Hanya was the best player on the pitch by a wide margin on Saturday, giving the CCSU (0-5-0) back line fits all afternoon. Hanya’s combination of quick feet and clinical dribbling wreaked havoc throughout the game and set up the second and third goals for UMass (4-2-2).

“We began to see it against Boston University,” said coach Fran O’Leary, “and then at Hartford [Hanya] was very good — today, he was probably unplayable. He just has an ability to go by people, and he was outstanding today.”

Hanya was causing problems from the opening whistle, skipping past two defenders and creating the first opportunity just minutes into the game. With the Minutemen up by a goal after a half hour, Hanya blew past CCSU left back Dan Lobello and played it across to senior DeAndrae Brown, who with a lovely turn and finish put UMass up 2-0.

“I’ll tell you what, for the past four or five games he’s probably been the best player on the pitch,” Brown said of Hanya. “One-on-one dribbling he’s one of the best players I’ve ever seen, so it’s one of those things where you know you can give him the ball and expect a cross later, so it takes a lot of pressure off the attackers knowing that when you give him the ball, something good’s going to happen.”

The Blue Devils hit back in the 59th minute to bring it back to 2-1, but less than a minute later it was Hanya at it again, this time weaving through three different defenders before he was tripped in the box, earning a penalty kick in the process.

Senior Jack Fulton slotted home his second penalty of the day, as Hanya’s attacking run shifted the momentum back in favor of UMass.

“We haven’t really had someone like him,” O’Leary said. “We’ve had very good wide players to deliver early crosses, but he gives us a totally different look, because he can actually take on people. He can take on two, three, four people at a time, and he won us a very important penalty. We’ve given away a goal, everyone’s a little down, and he’s just gone on one of his runs and won us a penalty, so we’re really, really happy with him today.”

“It’s like a play,” said Brown, “you give it to Yosuke and get out of his way, let him do what he does. Sometimes you need to support him, but two, three players come, and I’ve seen him dribble through all of them.”

Hanya burst through the right side again two minutes after the third goal, leaving Lobello and CCSU center back Julian Zass in the dust and cutting it back for freshman James McPherson, who forced a good save from the goalkeeper.

Hanya’s only statistical credit was the first assist to Brown, but his impact went far beyond, as the Japanese winger continues to come into his own. The Tokyo native needed a couple of games to settle, but he’s been stellar as the Minutemen near the end of their non-conference schedule.

Having played four times in the last nine days, Hanya and the rest of the Minutemen have their first break of the fall, with a week off before hosting two of their toughest opponents of the season — Dartmouth and New Hampshire — on Sept. 22 and 25.