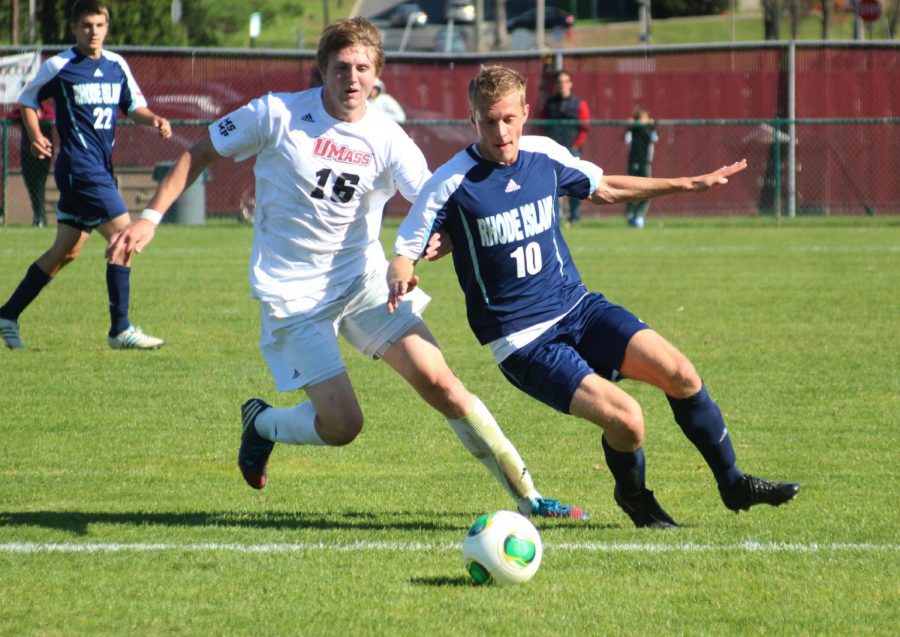 The Rhode Island men’s soccer team continued its dominant play over the weekend with a commanding 3-1 victory over Dayton.

The scoring didn’t happen until early in the second half, when Chae Brangman found the back of the net with a one-timer from an assist by Stavros Zarokostas. Brangman scored for the second straight game, and it was also his third goal in his last four games.

Dayton responded late with a goal in the 75th minute, which tied the game at a goal apiece. Jake Feiner scored the equalizer to keep the game at 1-1.

In the 80th minute Akselsen scored his first goal of the game off of a header from an assist by Emil Jesman Sunde. In the final minute of regulation, he sealed the victory with a goal to give the Rams a win.

Both teams had seven shots on goal, but none were more important than the two from Akselsen, who secured the win for the Rams. Freshman Roger Penske was stellar behind the net recording six saves and improving to 8-2 as a goaltender.

The win keeps URI in second place in the conference, while Dayton remains winless in A-10 play.

The Rams take this week off and pick up play when they travel to Duquesne on October 20. The Flyers play at home on Wednesday when they square off against La Salle.

Saint Louis moved to above .500 in conference play with a key 2-1 victory over St. Bonaventure this past Saturday.

The Bonnies scored in the 42nd minute, with time winding down in the first half, with a goal from Kosi Nwafornso who netted home the penalty kick.

The Billikens bounced back to tie the game early in the second half on a goal from midfielder John Klein. The strike was his team-leading sixth goal of the season.

On the stat sheet, the Billikens dominated the Bonnies 12-5 in shots and had a 7-1 advantage in corner kicks. Even with this advantage, Saint Louis still couldn’t capitalize until late in the game.

The Bonnies’ strong defense came up short when the Billikens were awarded a penalty kick in the89th minute of the game. The Billikens converted on the penalty kick from a goal by Devin Boyce.

It was a big road win for the Billikens, who jumped into fourth place in the A-10 ahead of Fordham.

Saint Louis plays next Wednesday night when they host Duquesne. St. Bonaventure continues play when they head to Syracuse on Tuesday for a match.