Looking for gains? Seek out grains 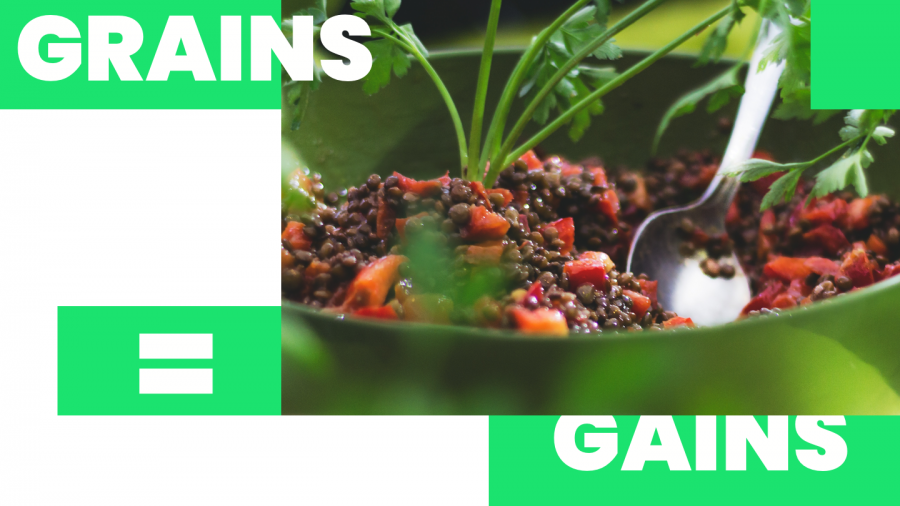 Author’s note: This article was inspired by Muscle and Fitness’ article on ancient grains and their benefit towards bodily gains. If you suffer from celiac disease but still are interested in eating healthy grains, check out this website for more info. Not all grains are dangerous for those with celiac disease.

Sure, you may try to maximize your gains before a workout by taking whey or other sources of protein, but what do you do post-workout? Unless you’re reaching for a whole grain, you’re risking a perfect opportunity to improve your gains.

Whole grains have long been subject to debate about their health benefits versus other grains such as enriched grains or multi-grains. Enriched grains are filled with “synthetic nutrients,” meaning they’re not naturally sourced from the food itself. Multi-grains sound health conscious, but unless they have a specific percentage of what they consist of on their packaging, they too are stocked with lies. Since they’re a mix, they could be made from either whole or enriched grains, unless it specifically states otherwise on the package.

Quinoa (pronounced keen-wah) is rich in amino acids. Interestingly enough, it is not a strict grain. It is instead a “pseudo-cereal,” which has similar properties to a grain and is often eaten like one. More than 120 varieties exist, so if you have yet to try one you like, keep trying other varieties. Quinoa has long been seen as a superfood, all the way back to the Incas who saw it as sacred, and according to legend, the emperor would be the first to start the planting after a blessing. You can find a tasty recipe to start you on your exploration here. No need to worry, the shopping list is mainly college-budget friendly. Quinoa’s one-fourth cup serving consists of about 160 calories, six grams of protein, 28 grams of carbohydrates and three grams of dietary fiber.

Freekeh also satisfies all aspects of a gain-worthy grain with redeeming stats such as high protein, fiber, vitamins and minerals.

Following the theme of quinoa, freekeh is once again not a “strict grain” per se. Instead, this substance is formed when young green grains (such as wheat) are picked and parched, roasted and the grain is rubbed off of the head of the plant (in this case, wheat). This “grain” can be found as far back in places such as Egypt, Syria, Lebanon and Jordan. According to legend, when an ancient city was preparing for an attack they stocked up on grain. After the fight, the people discovered their grain was badly burnt but realized it was still edible and that they actually enjoyed the flavor. As far as the taste goes, it resembles a nutty flavor and its consistency is chewy. If you need a recipe for inspiration, try the recipe here. Freekeh’s one-fourth cup serving consists of roughly 170 calories, seven grams of protein, 33 grams of carbohydrates and eight grams of dietary fiber. If you’re having trouble swallowing the price of some of the ingredients in these recipes, definitely check out brandless.com. Everything on the site is $3, and you’ll be able to get more products for less rather than spend $15 on olive oil at your local grocery store.

Farro comes from the Fertile Crescent, again in the hands and graves of Ancient Egyptians. While farro is actually a grain, it has three varieties: piccolo, emmer and grande. Perhaps more often they are referred to as einkorn, emmer and spelt, respectively. While farro may seem a beast to prepare, should the chef follow the directions on the package for cooking it, the farro will come out savory and rewarding. This entails having patience and usually soaking it overnight. The whole grain variety of farro will give you all of its intense flavor and nutrients, such as vitamin B3, fiber and zinc. For a beginner looking to increase their muscle gain, farro proves a smart choice. Each one-fourth cup serving of dry emmer farro contains roughly 170 calories, 6 grams of protein, 34 grams of carbohydrates and 5 grams of dietary fiber. It has been said that ancient Roman armies used farro to “sustain their energy.” If you’re looking to increase your gains at the gym, eating a serving or two of farro might be in your best interests. Try this Tuscan soup recipe.

History proves these grains’ worth and expansion from ancient armies’ meals to storefront shelves. If you’re focusing on your health and ignoring your grains, you’re risking missing out on some hefty gains.

Rebekah Panaro can be reached at [email protected]