“A Star is Born:” A timeless story told again 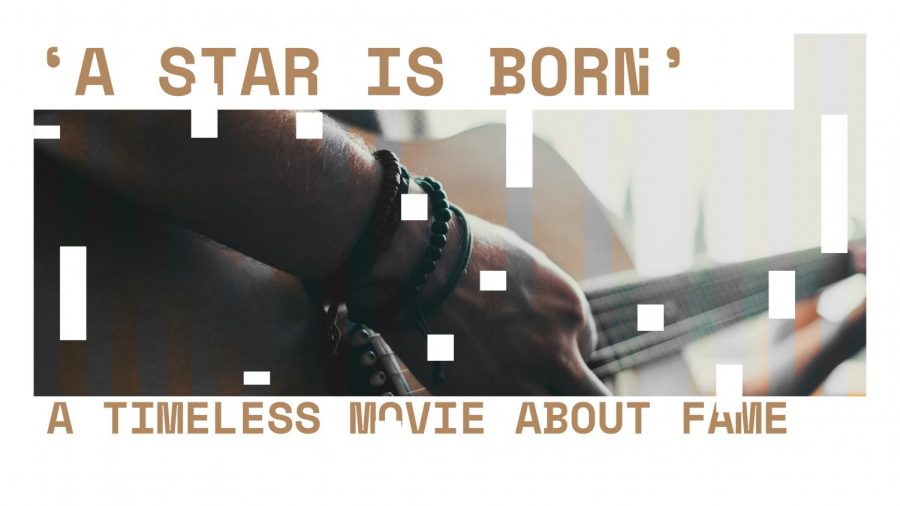 Every generation has its own version of “A Star is Born.” Bradley Cooper’s recent adaption is the fourth version the world has seen, with the film originally debuting in 1937 and later adaptations in 1954 and in 1976. All have the same title and same basic story about a woman’s journey into stardom, but each generation’s is different and has a different story to tell.

The film follows Jackson Maine (Cooper), a middle-aged country-rock star who is always drunk. One night, he stumbles into a bar and finds Ally (Lady Gaga), a shy 30-year-old waitress with a thunderous voice. Jack, captivated by her beauty and talent, quickly takes her under his wing and shows the world her talent. The stage partnership quickly turns into a romance and as Ally rises to pop stardom, Jack continues to drink and pop pills.

The film is Cooper’s directorial debut. There has been conversation that Cooper is one of the best directors of the year and I would not disagree. Everything that makes this film successful is largely because of Cooper. He beautifully brings his audience into the concert experience by filming at locations like Coachella and was able to translate the grand scope of rock concerts while also giving the audience a VIP experience. The film is lyrical, grand and intimate, all as a result of Cooper and cinematographer Matthew Libatique, who showed the audience the universal language of music and the effect it can have on people.

Even though this film is told from Jack’s point of view, it’s ultimately Ally’s story and Cooper knows that. It’s her journey we watch, therefore in order for the movie to work, the audience has to fall in love with her as much as Jack does. We meet an insecure waitress who’s given up on her dream and watch her slowly prove to the world, and herself, that she’s an amazing singer-songwriter. Pervious actresses that played Ally are Janet Gaynor, Judy Garland and Barbra Streisand meaning Gaga had huge shoes to fill – and fill them she did. Gaga accurately depicts Ally’s shyness effortlessly in the beginning that it’s impossible not to love her. Gaga is strong and holds her own, which is a testament to Cooper’s direction. He’s able to guide her through the film and let her shine without her even noticing it. For when she’s uncomfortable acting, especially in scenes that poke fun at the music industry, she makes up for them in the music performances. It’s only in these moments that the audience remembers that they’re watching Lady Gaga, the pop star. She’s scared yet feisty, strong yet vulnerable, open yet self-conscious. Ally is a tough character, especially for someone’s first character. But Gaga stepped up to the plate and showed true potential for an acting career if she chooses to go down that path.

Cooper also gives himself the role of his career. This version of Jackson Maine is unlike any Jackson Maine we’ve seen before. Cooper’s Jackson is a simple and quiet soul that loves music and sharing it with the world. He values truthful song-writing and self-integrity. He’s got the country swagger and essence of a rock star but hides behind a damaged soul that you can only see in his eyes.

The concept behind “A Star is Born” is quite simple to understand: in order for a star to be born and therefore rise, another one has to fall and die. This concept might have been spot on for the other incarnations but not for Cooper’s. In this version, Jack never becomes jealous or villainous as Ally’s surpasses him in the industry. Instead, Cooper focus on the love story between Jack and Ally. Even though Ally is in a relationship with an alcoholic, a fact she was aware of from the beginning, she still loves and supports him. They are a strong and stable couple so jealousy never becomes a conflict in the film. Perhaps because, in this version, Jack isn’t a struggling musician. He has no problem selling out (huge) arenas, going on tours and having concerts with encores. Yes, Jack might not be the artist he once was, but the public still loves him. His star isn’t burning out. It might have fallen a little bit, but Jack doesn’t seem to mind.

Even though the film doesn’t depict jealously, it’s still dramatic. It’s a love story and a film about music but also a film about fame: the cost and addiction. The film shows the eat-or-be-eaten world of entertainment and how an aspiring artist can enter the industry as one person and become a whole other individual once they become a “hit.” All of a sudden, Ally has a new look and wardrobe and writes songs that are meaningless yet become double platinum. As Ally becomes a completely different person, Jack drinks more and more.

Unfortunately, the film doesn’t allow the full story to sink in. At the end of the day, we don’t root for Ally and Jack as much at the end as we did in the beginning and we’ve seen dozens of films that depict addiction much better. Maybe it was the script, the emphasis on Jack instead of Ally in the second half, or the fact that moments were never fleshed out enough. Instead of cutting a scene off or having a montage behind a song, Cooper could have filmed an entire scene about Jack’s addiction which would have made the audience understand the character’s struggle. The audience constantly waits for that big jaw-dropping scene, but it never happens.

With its strengths and weaknesses, “A Star is Born” is one of Hollywood’s greatest achievements. It’s a story told differently in result to the time it was made and the artists who created it. It shows a specific generation’s view on fame and the love and the struggle to maintain one’s identity. Sure, there are issues but it’s still enjoyable and accompanied with a great soundtrack by one of our greatest pop stars. But this isn’t the last we’ll see of this story and I’m interested to see how this story will evolve in 30 years when the next one is released.