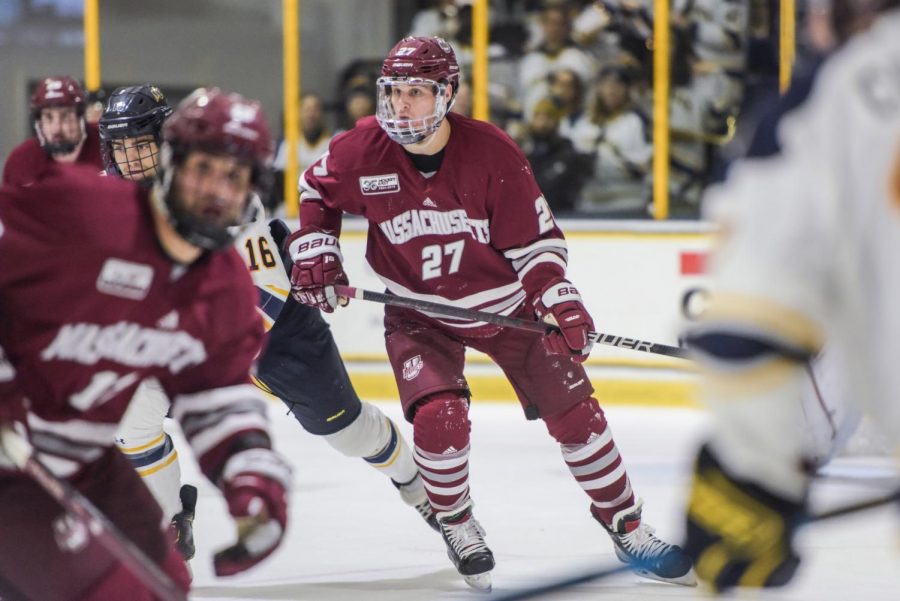 The No. 11 Massachusetts hockey team worked all preseason on improving its special teams. The power play units needed to be more effective and the penalty-kill tandems had to perform more consistently than last season. Coach Greg Carvel stressed showing growth in those two areas would go a long way in the successes and failures of this year’s UMass (5-1-0, 2-0-0 Hockey East Association) team.

Through the first month, the Minutemen have been nearly lights-out in all areas of the special teams department.

Only six games have been played, but both the power play and penalty kill have already shown steady improvement and have each played important roles in winning UMass games.

Take the most recent series against Merrimack as an example. The Minutemen scored nine goals over two games with the Warriors. Four came on the man-advantage, one was a shorthanded strike and one came after UMass pulled its goalie and were skating 6-on-5. That’s six out of nine goals coming when play wasn’t at even strength.

Then midway through the second period, freshman Bobby Trivigno was assessed a five-minute major penalty and a game misconduct, putting the Minutemen on an extended kill at a critical point in the contest. The score was knotted at 2-2 and Merrimack could have put the game away but instead UMass stood tall, making four blocks combined with Filip Lindberg’s four saves, to keep it tied.

The special teams’ effort won the series and has been a strong point all season long.

On the season, the Minutemen have a 37 percent conversion rate (10-for-27) while up a man, technically good for first in the country. Dartmouth and Harvard each have a higher percentage, but both have only played one game.

Graduate transfer Jacob Pritchard has particularly been a weapon on the power play, as all three of his goals have come on the man-advantage. He stands along the right half-wall and is a prime passing option for Cale Makar when he feels pressure at the point and so far, it’s worked wonders.

That entire first unit of Pritchard, Makar, Mitchell Chaffee, John Leonard and Marc Del Gaizo have looked really well together and seem to have effortless chemistry.

Makar at the point is extremely lethal, as his shiftiness plus his vision make him a nightmare to defend. Leonard and Pritchard act as the trigger men while Chaffee is more of the net-front presence. Marc Del Gaizo is the other outlet for Makar on the left.

There isn’t a significant drop off with the second unit as Mario Ferraro, Ty Farmer, Bobby Trivigno, Philip Lagunov and Niko Hildenbrand (or Oliver Chau) have looked in sync as well.

With all the attention the power play is getting it’s easy to overlook just how tight the penalty kill has been. Sticking with these last two games against the Warriors, UMass killed all six of its penalties off in the first outing and then repeated the feat the next night, with a major penalty thrown in there too.

The spectacular goaltending of Matt Murray can take much of the credit for the PK success on Friday while the Minutemen were more tenacious Saturday, led by Hildenbrand especially.

UMass’ penalty kill sits with an 89 percent success rate (26-of-29) and is tops among all Hockey East schools. While a power play strike can ignite the offense, a shutdown penalty kill can instill confidence throughout the entire lineup and that seems to have infected each and every Minuteman during this early stretch.

Now the key for the Minutemen will be to keep the special teams’ success going and prove it can be a season-long threat and not just an early-season mirage.