Amherst Survival Center celebrates with the community over breakfast 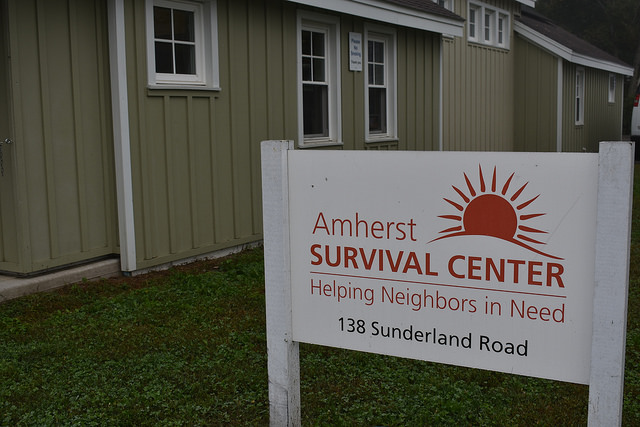 Students, townspeople and a state representative came for the community and stayed for the food at the Amherst Survival Center’s third-annual community breakfast on Saturday morning.

Started as a celebration for the Survival Center’s 40th anniversary in 2016, the community breakfast has since morphed into an annual event where participants, volunteers, donors and community partners come together over pancakes, frittatas, fruit and coffee.

The Amherst Survival Center provides “food, clothing, health care and for companionship and relief from isolation” to over 6,000 people every year in Franklin and Hampshire Counties, according to their official website, through services such as a food pantry, drop-in health clinic, community free store, yoga and exercise classes, field trips, job readiness workshops and job fairs.

Natalie Blais, former chief of staff for Chancellor Subbaswamy and current Democratic nominee for first district Franklin County state house representative, said that she finds the Survival Center to be integral to the Pioneer Valley, as they “serve every need for those most in need for our community.”

The Survival Center receives help from over 200 volunteers.

Richard Dresser, a spokesperson for people with disabilities, first started volunteering in 2004 when the Survival Center was in the North Amherst Center. For five years, he worked in the kitchen, cleaned dishes and served food, as well as collected furniture for donation from students and Amherst residents. Every Tuesday, he would also pick up food – usually “two big skids” – from the food pantry in Hatfield.

When the Survival Center moved to its current location on Sunderland Road, Dresser continued to volunteer for a year and a half. However, he had to retire due to knee problems sustained from loading the trucks.

Chas Stevenson has been volunteering for a year and a half, yet, his time with the Survival Center spans much longer. When he first moved to Amherst 20 years ago, he could not afford to eat and relied on the Center for meals.

“I came here for lunch just about every day,” Stevenson said.

Now, every Friday morning, he picks up baked goods collected from Glazed, Henion Bakery, The Works and Atkins Farms to donate to the Survival Center.

However, Stevenson emphasized that the Survival Center is not just for those struggling financially. “It’s for the whole community,” he said.

“Whether [or not] you have 40 million dollars in the bank, we’ll still feed you,” Stevenson added.

For volunteer Lily Wallace, one of the things she loves about the community breakfast is that “everyone is at the same table, eating breakfast.”

Wallace began as an intern at the Survival Center last fall, while she was a student at the University of Massachusetts, as part of her work study. After graduation, she continues to volunteer here not only because “the resources [provided] are unlike any other,” but also because of its impact on her. She added she wished students knew more about using their work-study to be engaged in the greater Amherst community.

“The space has given me so much and I just want to give back,” Wallace said.

Program Director Tracey Levy loves the Survival Center because, whether through volunteering or donations, “it’s a community where people are coming together to help each other.”

“Everyone is part of the same community,” Levy added.

Co-sponsors for the event included Trader Joe’s, C&S Wholesale Grocers and the University of Massachusetts.