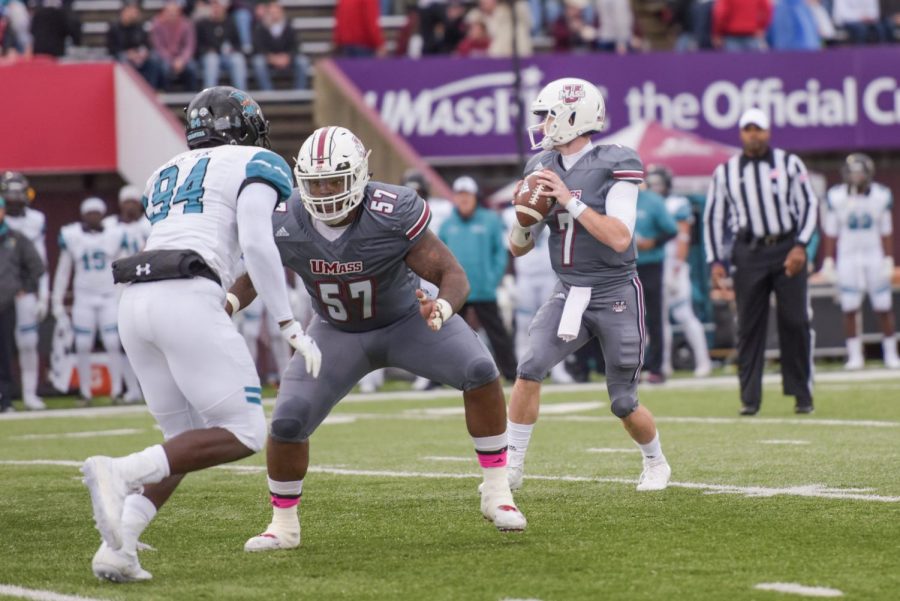 Through the first seven weeks of the season, it has been more of the same problems for the Massachusetts football team.

One of the biggest weaknesses for the Minutemen (2-6) this year has been controlling the line of scrimmage to stop the run and allowing big plays, and those problems showed themselves once again against Coastal Carolina, which outrushed UMass 279-63 during its 24-13 victory.

With starting running back Marquis Young missing the game due to an injury suffered against South Florida, the Minutemen were unable to generate anything on the ground, rushing for just 2.9 yards per carry. Many of the rushes resulted in negative plays, with UMass losing 58 yards on run plays, often setting themselves up in second- or third-and-long situations.

On the other side, the Minutemen defense once again was unable to stop the opponent’s run game. The Chanticleers (4-3) put the ball in the air a mere 18 times, but that was all they needed, as their running game averaged 5.4 yards per carry to extend drives.

Stopping the run has been an issue for UMass all season long, as the Minutemen had allowed opponents to rush for an average of 273 yards a game heading into the contest.

The UMass defense was able to tighten up in the red zone, but two big plays were killers for the Minutemen. The first was a 61-yard touchdown pass from Fred Payton to Malcolm Williams, who was wide open in front of the UMass bench and went untouched into the end zone.

It was a busted coverage, and one of many times this season the Minutemen have been burnt on big plays.

The second was another Payton touchdown pass, this one to C.J. Marable, who was able to sky over Brice McAllister and rip the ball out of the air for a touchdown.

While Coastal was able to produce a few big plays offensively, the same couldn’t be said for the UMass offense. The Minutemen were able to rack up 453 yards of offense, but were only able to come away with one touchdown.

In the first half alone, UMass had 250 yards of offense, but produced just six points due to turnovers and an inability to produce in the red zone.

“There was a lot of yards in the first half and no points,” Whipple said. “We just couldn’t put it together on offense to score. If you had told me we held them to 24, I would have thought we had won. We just didn’t play as well as we needed to on offense tonight.”

For wide receiver Sadiq Palmer, who finished with seven catches for 139 yards and a touchdown, he felt the scoring struggles were on failed execution.

“I felt like we played really well we just didn’t finish a lot of drives,” Palmer said. “We just have to finish those drives. It was nothing they did, most of them was off penalties or a dropped pass. Everything was on us mostly.”

The Minutemen will look to execute better next time out, travelling to Storrs, Connecticut to take on UConn.