Big second half propels UMass field hockey to A-10 win

UMass gains ground in A-10 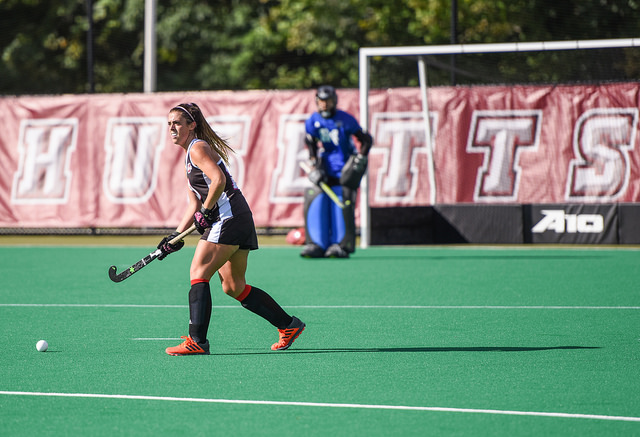 Four goals in the second half propelled the Massachusetts field hockey team to a big Atlantic 10 win, as UMass prevailed 5-2 over Saint Francis on Friday afternoon.

UMass (7-8, 5-2 A-10) took the lead two minutes into the second half after Antonet Louw fired a shot inside the right post following a penalty corner. Freshman Mus Defauwes scored her first career goal with a diving shot in the 40th minute to extend the lead, and the Minutewomen never looked back.

“This was a really important game,” midfielder Sara Davis said. “We knew it was big for the A-10s. If we win against these girls, then we’ve secured a third-place spot in the A-10 conference play. So we knew they were going to come out aggressive, and we didn’t let it get to us, stayed hungry.”

With the win, UMass moved to third in the A-10 standings, behind only Saint Joseph’s and Virginia Commonwealth. Saint Francis (8-8, 4-3 A-10) fell to fourth.

For the fifth straight game, the UMass defense allowed two goals or fewer. Saint Francis took mine shots on goal in the game, but only three on starting goalkeeper Johanna von dem Borne. With less than 20 minutes to play and a three-goal lead, von dem Borne came out for redshirt freshman Megan Davies, who made five saves and allowed one goal.

“Our defense, particularly our central defense, has been strong all season long and kept us in a lot of tough games,” coach Barb Weinberg said, “and they continue to come up with big tackles in our defensive end. Both goalkeepers contributed today and came up with big saves all game long.”

The defense was aided by a strong showing from the midfield, which had struggled at times this season. UMass possessed the ball for much of the first half and never let Saint Francis sustain an attack until late in the second half, when the game was out of reach.

Sophomore Georgie McTear opened the scoring in the 10th minute off a penalty corner, but Saint Francis answered just two minutes later to tie the game. Although UMass kept possession of the ball for most of the first half and took 11 shots, Saint Francis held the Minutewomen to just the one goal through halftime.

The dam burst in the second half, starting with Louw’s goal. This time, the Minutewomen kept Saint Francis from responding. Goalkeeper Johanna von dem Borne made one save before UMass got back on attack and Defauwes extended the lead.

Lucy Cooper added a highlight-reel goal in the 52nd minute, and Georgie McTear tacked on her second goal of the game in the 61st minute for UMass’ final goal.

Although the Minutewomen took just two more shots in the second half, they were much more efficient, scoring four times on 10 shots on goal.

“We just wanted to keep the level of play up [in the second half],” Davis said. “We didn’t want to give away any stupid goals. We didn’t want to let any mistakes happen, and we just tried to stick with the basics the whole time.”

UMass was much crisper passing the ball in the second half. In the first half, there were several passes seemingly into nowhere, which inevitably led to turnovers. As the game went along, UMass tightened up and eliminated those sloppy turnovers.

“I think a lot of times in the beginning of the game, it’s just figuring out how the other team is pressing and being able to find spaces around them,” Weinberg said. “So it took us a little bit to work that out, but towards the end of the first half we started to play really nice possession hockey.”

UMass returns to action Sunday in the road against Boston College.

Thomas Haines can be reached at thaines @umass.edu and followed in Twitter @thainessports.