Studio in Hadley opened in 2017 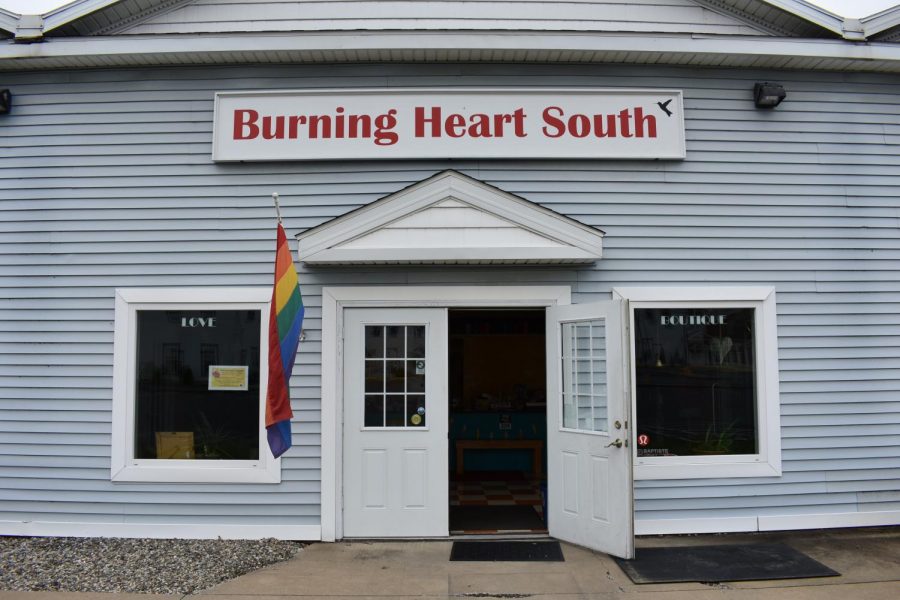 Burning Heart South is a studio and boutique located at 191 Russell St. in Hadley and encourages everyone to become the best version of themselves through hot yoga, pilates and indoor cycling.

A bright, yellow wall with glitter greets customers as they walk in. Workout clothing, Burning Heart merchandise, water bottles, lip balms, deodorants, yoga mats and more can be purchased in the front part of the building. The studio consists of a yoga studio as well as a room full of bicycles for spinning.

Burning Heart “welcomes everyone, of all ages, shapes, colors and sizes. We love you fat, skinny, rich or poor, tatted, queer, straight, transgendered, shy, punk or LL Bean. We love you and your commitment to being the best version of you can be.”

Ellen Abraham, the owner of Burning Heart, has been in movement for over 25 years and has had studios in southern Vermont for about 10 years before selling them. She also worked at SoulCycle in New York City for nine months.

She landed in western Massachusetts and opened her first Burning Heart studio in Greenfield in 2012 prior to before opening her Hadley studio in 2017.

Abraham works primarily out of Greenfield, which she refers to as her home base, but she became involved in a comprehensive pilates training in Hadley, which anchors her to Hadley more.

While working at SoulCycle, she became unhappy and decided it wasn’t for her, as an employee. She knew she was more of an entrepreneur, more of a creator.

The name Burning Heart came to her in the summer of 2012 after she realized she was truly a studio owner and was able to put her feelings into words.

She moved back in June of 2012 and opened the Greenfield studio in October.

Her biggest inspiration for the new Hadley studio was the passing of her mother last year.

“Seeing her, her strength through her sickness, she had cancer, I knew I couldn’t play small,” Abraham said. “I knew there was so much of an infectious soul family feel for me in Greenfield that I knew I wanted a broader reach and I wanted more people to have that experience with more people. So, I started looking for a space in Hadley right as she died.”

Abraham recalled how she had to hustle to open the Hadley studio. It was the first building where she had to build, as opposed to just painting the rooms, putting the mirrors and fans up and install the sound system. This space, she had to plan, get permits and take out loans.

“It was the first place I had created. It’s got a lot of personal, emotional, heart, blood, sweat, tears into it,” Abraham said. “It’s only been a year since grieving my mother but also blooming something like this.”

The studio is starting to get more college students attending classes in the Hadley space and hopes to draw in even more students.

“It’s a totally different feel, it’s not like a gym, it’s a community. It’s like a tribe,” Abraham explained. “We cater to a boutique experience, but it has a home, soul, family feel.”

Abraham’s plan for the future: “more.” She plans to push out more classes, build more community and have greater outreach. She wants to create a space for people who want to change the planet.

Time management is Abraham’s biggest challenge. She used to be able to have her hand in everything: teaching, managing, doing inventory, cleaning. She explained now, her business is a lot bigger than her, with 22 classes and moving parts at each location. Her goal has been building a team that helps her express and be ambassadors that spread her vision of being the best version you can be on the planet.

“I’m really about people being the best versions of themselves and making choices that they realize what they do matters,” she said.

Kristina Mose-Libon is a Baptiste hot yoga teacher at the Hadley studio and also helps Abraham with administrative tasks.

Baptiste hot yoga is a “hot power yoga sequenced in a very particular way so that you have a warm up, then you are at your hottest, hardest type poses and action and then you come back down to a meditation for a few minutes at the end of the class,” Mose-Libon said. “The style is based on using your breath, self-inquiry and asana yoga practice.”

She has worked at Burning Heart for six months and became a teacher after earning her first certification in 2016.

Mose-Libon has lived in the area for about 15 years and previously worked as an associate art director in the publishing business. She first became interested in Baptiste hot yoga about 10 years ago when she was going through a lot of emotional changes and had done yoga off and on since her college days.

“I immediately knew that was the place where I could come, let go of everything for an hour or hour and a half, and just be with myself, work through emotional and physical limitations,” Mose-Libon said. “It became a major inspiration in my life and I got tired of sitting in front of a computer for 10, 12 hours a day.”

Mose-Libon is also a certified children’s yoga teacher and has been working at the Northampton school system. She hopes to continue bringing yoga to the people, especially the communities that don’t have the opportunities, and integrate mindfulness into those communities.

“That’s an inspiration of mine, a big goal is to get out there and bring it to others because it helped me so much. I’d like to share that with other people.”

The schedule of classes can be found on their website. Student rates are available for purchase with a student I.D.