Transition game proving to be strong suit for Minutemen 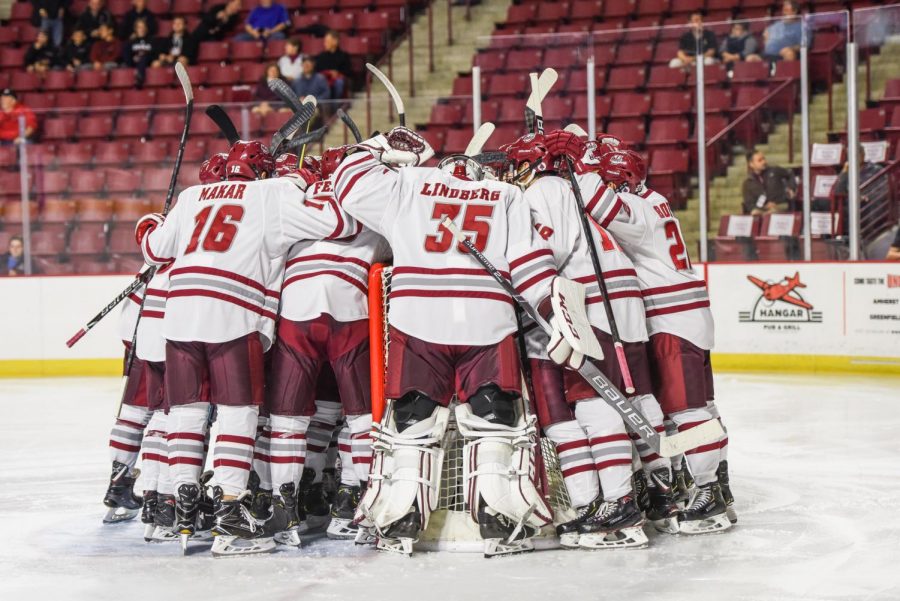 The Massachusetts hockey team has gotten off to a fast start in the 2018-19 season thanks in large part to timely scoring and stout goaltending.

What may not be as evident is that when UMass (3-1) is at its strongest, it is breaking the puck out of its own zone smoothly, and then entering the opposition’s defensive zone with purpose.

In the Minutemen’s upset win over then-No. 1 Ohio State last Friday, the Minutemen jumped out strongly, leading 2-0 after the first period, mainly because they were executing on their breakouts so well.

Pucks were being transported from the defensive zone to the offensive zone without a hitch and it allowed UMass the ability to pounce on the Buckeye backend right from the start.

“We have to have a fast transition game,” defenseman Mario Ferraro said. “We knew that with a team like Ohio State they forecheck really well and they had good systems, especially in the neutral zone. We’re looking to try and get the puck up ice as quick as we can to feed the offense, so the less time you spend in the D-zone, the more chances you have to score.”

The Minutemen like to move the puck quickly through all three zones, with the stretch pass being their primary option. A proper stretch-pass can spread the defense out and make it easier for the attacking team to penetrate the neutral zone, followed by easy access into the offensive zone, and UMass is already showing a level of comfort in its breakouts that can sometimes take an entire season to acquire.

Much of the responsibility falls on the defensemen for breakouts because they are usually the first one’s back retrieving pucks in the defensive zone. They are the ones who have to assess whether completing a pass to a forward or skating the puck out themselves is the better route to take. Given the defensemen group UMass has, the breakouts are heavily tailored around the strengths of its blueliners.

“We want to move pucks really fast up the ice and our D-corps is probably the best at what they do,” center Philip Lagunov said. “We’re built for that. We’re built for quick movement up the walls. As wingers and centers, we’re just options for the [defensemen] to make quick passes.”

“We’ve got good, skilled, heady, defensemen that can go back and pick your head up and make reads,” Carvel added. “That’s where [Ty] Farmer and [Marc] Del Gaizo are really elite players, is that they can go back and make plays and sometimes skate pucks out of trouble, so we’ve fashioned our back-end with kids that can do that.

“We give up size a lot of the time for that but in today’s game, especially on our ice, you need guys who can go back and make real heady plays and get you out of your zone as quick as possible.”

If the stretch pass just isn’t materializing, it still serves a purpose in backing the other defensemen off to their blueline, thus creating more space for the Minutemen defensemen to rush the puck themselves, if they see an open lane.

“When we push those forwards back to the far blueline for tip-ins, it causes their [defensemen] to back up and it opens up a lot more space so we have a lot more room to skate,” Ferraro said. “That’s something Coach [Carvel] was stressing on us as defensemen a lot is to move our feet. We don’t want to get in the habit of standing still and trying to make plays without moving our feet with the big ice we got here.”

Establishing an efficient breakout early can also do wonders in setting a team up for success, which UMass proved in its contest last Friday, and will look to replicate this week opposite Merrimack.

“That’s how we build momentum for the game, especially in the beginning,” said Lagunov. “Getting that puck possession, being crisp with the passes from the [defensemen] to the forwards, moving the puck into the zone is crucial.”