The vigil was organized by UMass Hillel 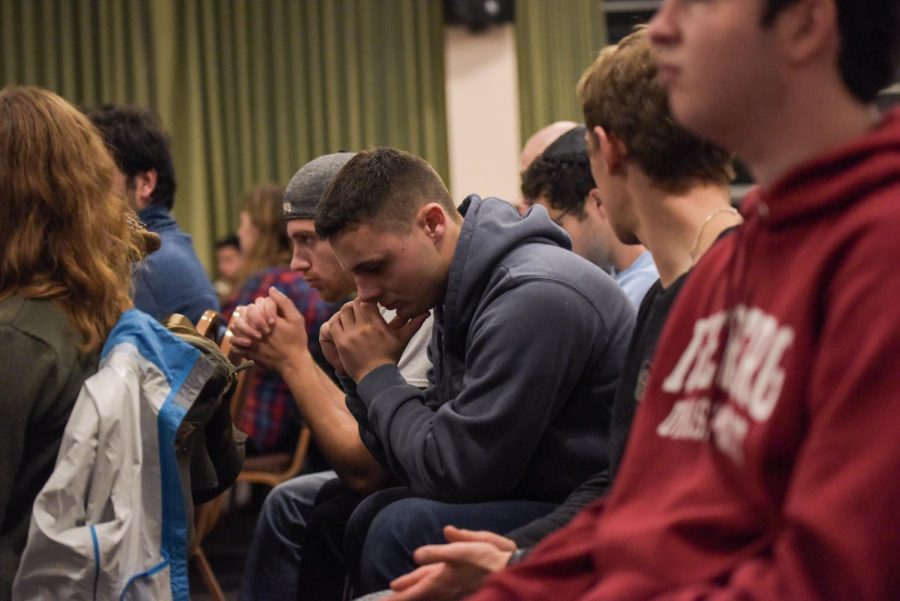 Members of the University of Massachusetts community packed into the Cape Cod Lounge on Monday evening to remember the victims of the shooting at a Pittsburgh synagogue and racially-motivated killings in Louisville.

Rabbi Aaron Fine, executive director of UMass Hillel, began the vigil by thanking the Hillel staff, University administration, students and community members for putting it together at the last minute.

“While I did not personally know the 11 Jewish congregants who were killed at the Tree of Life synagogue this past Shabbat, I feel a deep sense of knowing them,” Fine said. As a Rabbi, Fine could recognize the victims in other synagogue attendees, he said.

Students then read the names of the victims of the two tragedies and each lit a candle in honor of them. Fine delivered a traditional memorial prayer and recognized the six people who were injured in the Pittsburgh shooting, including four police officers who responded and protected individuals.

Chancellor Kumble Subbaswamy was next to speak, stating, “Like everyone else, I want to express my deepest sympathy to the victims, their families and all of those who have felt the intense pain inflicted by both Saturday’s mass shooting at the Tree of Life synagogue and the earlier families in Kentucky.”

In an earlier campus-wide email on Oct. 28, Subbaswamy wrote, “I also I want to reaffirm UMass Amherst’s commitment to ensuring a safe and welcoming living-learning environment for every member of our campus community. And I call on every member of our community to reject hatred in all its forms and to stand united in defense of tolerance, diversity and inclusion.”

Alon Confino, history professor and director of Institute for Holocaust, Genocide and Memory Studies, was invited to speak next. He spoke about how the horrific events are mind-boggling and he drew a few conclusions from “the most terrible attack of Jews on American soil.”

“Something has happened in America, it’s not just that someone gets a weapon, gets into a synagogue and kills other people,” Confino explained. “This thing happened when leaders, national leaders, give critics to sexism, racism, anti-Semitism ideas.”

“We grieve, we heal, but we decide to take action. We must say to those who propagate these kinds of values… that this cannot happen. Not on our watch,” he said.

Chabad House at Amherst co-director Yocheved Rivkah Adelman was the next to speak.

“The motto of UMass, that hate has no place here, that dignity and respect should be the order of the day. I wish it were the motto for our world, that hate would have no place in our town, in our state, in our country, on our planet,” Adelman said.

She said that if this took place 100 years ago in any community, “it would be supported, applauded, at least ignored,” unlike today.

Adelman then talked about how each person, each “holy soul,” is a light and when these “holy souls” left the world, so did their light. She explained that people needed to fill this vacuum and share the goodness of their hearts with other people.

“When there is darkness, it is our job to bring light and bringing light can start with small deeds. A very dark room changes because you lit one small candle,” she said.

After the service ended, attendees stayed to share their thoughts and feelings over refreshments provided by the University.

“We might think ‘what good is it coming together just speaking words and lighting candles?’ Well words have power, power to hurt, power to destroy, to create fear, to vilify, to incite violence. But words also have the power to recreate the world,” Fine said.