For Tim Ritchie, running is more than a sport 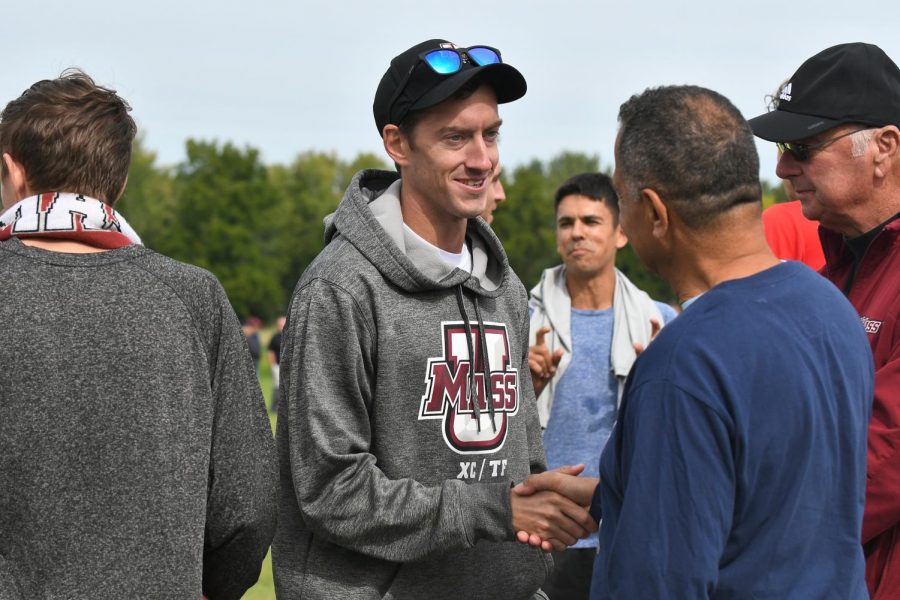 In high school, Tim Ritchie was never the fastest.

It was the same story when he attended Boston College to continue his athletic career: posting solid results that made him competitive at the regional level but again, no eye-popping marks that showed hints of Ritchie’s true potential.

Now, over eight years after graduating from BC, Ritchie has signed a professional contract with Saucony, qualified for the Olympic trials twice and became a national champion in the marathon last year, and he’s still not done.

“Olympic marathon trials are in 2020 – that’s a chance to make the 2020 Olympic team,” said Ritchie. Last December, Ritchie won the USATF Marathon Championships in Sacramento with a 2:11:55 split and beat his previous best time which he set back in 2013 by over three minutes. The result was also the second-best mark by an American in 2017, behind only Galen Rupp who won a bronze medal in the marathon at the 2016 Rio Olympics.

Now, the national champion has joined the Massachusetts men’s cross country as its new head coach, his first gig as a head coach. Upon his hiring, Athletic Director Ryan Bamford released a statement expressing the University’s excitement to have Ritchie at the helm: “[Ritchie] brings extensive coaching experience and an impressive plan that will support tremendous growth for our student-athletes. He is also a world-class athlete himself with outstanding connections to the Commonwealth and New England region. In every way, we think this is a great fit for UMass.”

“He has intimate understanding of what it take to be successful at the collegiate level,” said Tim Broe, Ritchie’s current running coach who made it to the 2004 Summer Olympics in Athens in the 5000 meters and has helped Ritchie over the past two years as part of a Saucony running team based out of Boston. “But he also brings in work ethic and is driven to succeed as a coach in the same way that he is driven to succeed as an athlete.”

Before UMass, Ritchie served as an assistant coach at BC in both indoor and outdoor track for six years, starting in the fall of 2010 after graduating earlier that spring. During his tenure as the distance coach, six school records were set, he helped coach five athletes to All-New England performances and he produced a New England champion in the 10k. He then moved to New Haven, Connecticut in late 2016 and helped out with the men’s cross country and track programs at Yale.

This past winter, he then put his hat in the ring to replace long-time UMass head coach Ken O’Brien, who moved to coach emeritus of the cross country and track programs after serving as head coach for over 50 years. David Jackson, director of the men’s track and field program, was closely involved in the search for a new cross country coach earlier this year and spoke on what made Ritchie a good fit to replace O’Brien.

“What really stood out about [Ritchie]was that he was a local guy,” Jackson said. “[He] ran for an institution with the state at BC and he runs professionally. He wasn’t a super standout guy out of high school. I think he was a good runner. He’s worked really hard to be better, and that piece he has in his tool bag for being a coach is what allows him to identify well with our guys.”

Despite his success as a professional athlete and just beginning his career as a Division I head coach, Ritchie nearly walked away from the sport entirely in 2012. After missing qualification for the Olympic Trials in the 10000 meters, the then-25-year-old found himself at a personal crossroads.

“I had been out of college for three years and trying to make it as a professional runner, while also gaining experience as a coach,” Ritchie said. “At that point, [I was] hitting that threshold where I had to make a decision: Is this what I wanted to keep doing from a running standpoint, or should I try and transition into more of a professional coaching career? I was also considering a few alternative lifestyles that didn’t involve running or coaching.”

At that point, Matt Kerr, who was the head of the cross country and track program at BC and who Ritchie was also an assistant for, convinced Ritchie to run in the Boston Marathon in 2013. Ritchie was skeptical at first — he had only run half-marathons before. But Kerr insisted he give it a shot, believing that Ritchie still had plenty of untapped potential left in the sport. Although Ritchie still had his doubts, he entered and began training for his first marathon.

Marathon Monday arrived and the 20,000-plus runners were sent off into the streets of Boston; Ritchie describes the events of that day as a “whirlwind of emotions.”

“There were some very high highs [that day],” he said. “Being on the start-line of the greatest race in the world, getting to my first marathon and all of the training that went into it and all the relationships I had built along the way. It was a really special moment. I was so happy to be out there running on the course and run by Boston College.

“All of it was something in running that I hadn’t experienced and something I couldn’t walk away from in the moment.”

But what was supposed to be a watershed moment in Ritchie’s athletic career turned into a nightmare for him, the city of Boston and the country.

As spectators were cheering on around 5,000 runners who were still yet to finish, two pressure cooker bombs were set off near the finish line of the race. The blasts killed three, including an eight-year-old boy, and wounded over 250 people. The Boston Marathon bombing was a horrific event that gave new meaning to a day where spectators from around the globe came to see athletes compete in one of the world’s premier sporting events.

“[When] the bombings happened it really shook everything,” Ritchie said. “What it meant to be a runner at that moment changed for me. It wasn’t just about [personal records] and trying to win races; it was about the community, about overcoming obstacles, about the people in my life that had given me this opportunity to be a runner. All of this stuff revealed itself in the aftermath of the Boston Marathon bombing and it was really eye-opening. I think it was a sign that I still had more to learn from the sport and more to give in the sport, both as an athlete and as a member of the [running] community.”

Not only did the events of April 15, 2013 change Ritchie’s outlook on what it meant to be a Bostonian runner, but it was also a breath of fresh air for his competitive career. Later that year, he ran a 2:14:50 at the St. Paul Twin Cities Marathon in Minnesota, shaving over seven minutes off from his inaugural race in Boston. As a result of his efforts, the BC product signed a professional contract with Saucony in 2014. Then, despite battling a pair of stress fractures from March of 2014 to early 2015, Ritchie was still able to qualify for the USATF National Championship in the 2014 in the 3000 meters indoors, and in 2015 qualified for the 10000 meters outdoors. A year later, he qualified for his first U.S. Olympic marathon trials, and in 2017 he became a national champion after winning the California International Marathon, held in conjunction with the USATF marathon national championship in Sacramento.

Ritchie quickly went from being an aspiring professional athlete who was thinking about walking away from the sport of running entirely to being a U.S. champion and bona fide star in just four years — as if he used all the emotion and pain from that horrific Marathon Monday as fuel for his unprecedented rise to being one of the best marathon runners in the world. All the while, he was helping to train and coach collegiate runners whose shoes he was in just years prior.

When asked about the challenges that come with the dual-life of being a head coach for a Division I program and a professional runner, Ritchie made it clear that his athletes are his priority and that he’s had to make sacrifices as a professional athlete in order to meet the demand of being a head coach. Albeit, Ritchie admitted that he’s still adapting and learning from these demands each day. But the early returns that he’s produced in his first season indicate that Ritchie could be in for a long, successful tenure as a head coach in Amherst.

The men’s cross country team won its first race of the year earlier September at the Minuteman Invitational, marking the team’s first win at the race since 2012. Two weeks later, the Minutemen raced at the Battle in Beantown in Franklin Park, where nearly every returning runner ran a faster time than they did at last year’s race. The new head coach has already drawn praise from his athletes according to Jackson.

“From what I see and talking with our cross country guys, they really do appreciate [Ritchie],” Jackson said. “They like him, they like his technique and they are adapting well to his coaching theory and pedagogy.”

“I just want to build a relationship and trust with the team, that’s first and foremost,” said Ritchie. “I think if we can establish that relationship then the recruiting, athletic performance and academic success will all stem from that.

“I’ve just been trying to spend time to get to know these guys on a personal level and a running level – assure them that I’m here for their best interest, success and [that] their well-being is important to me.”