Student hackers worked, ate and slept throughout the weekend in the ILC 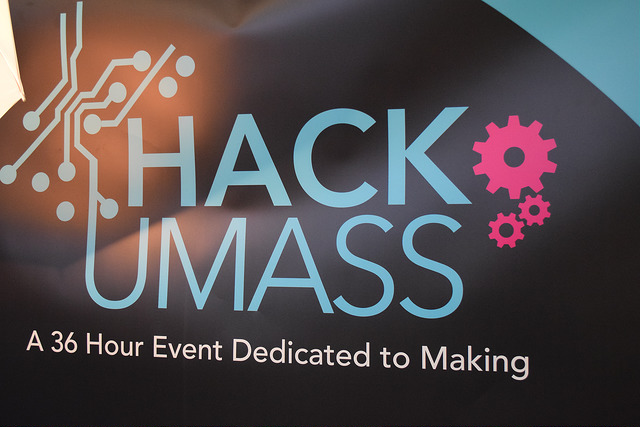 From Oct. 12-14, nearly 1,000 hackers descended onto the University of Massachusetts campus for Hack UMass VI, an annual event for technology-savvy students to put their computer coding skills to the test in the Integrative Learning Center.

Dan Cline, a sophomore computer science major and head of logistics for HackUMass, helped to oversee the year-long preparations and physical setup for the three-day event, which began midday on Friday and concluded Sunday evening with the closing ceremony.

“There have been some little hiccups here and there and just things we just haven’t been able to control, but that’s all to be expected with an event of this size. I’m surprised how well it’s going,” Cline said.

From his logistical estimates of the around 960 students in attendance, Cline said somewhere between 40 to 60 percent of participants are from UMass, while the rest ventured to HackUMass on their own or through bussing allocated by the HackUMass organizers.

During their time at the modern, state-of-the-art ILC venue, chosen for its “robust WiFi and ample space” according to the HackUMass website, students were treated to a broad array of activities. These included app development workshops for both Apple and Android devices, various computer science career lectures, a trivia event for Soylent (a meal replacement product) and entertainment opportunities such as gaming, a comedy show by Sketch 22, an assortment of 3D printers and karaoke.

The main draw for HackUMass however, was the science fair-style judged hackathon in which students such as visiting Salem State University computer science majors Jackie Charbonneau, a sophomore, and Phillip Iwanow, a junior, were tasked with developing software and hardware projects solely within the span of the weekend. At stake was the chance to become a competition finalist and a potential winner of the grand prize.

Perched in one of the many ILC classrooms occupied by hundreds of students as workspaces, Iwanow and Charbonneau said they were developing a “floating point calculator” by programming their circuit from scratch with the hardware description language Verilog.

“It’s been really great, I think the event turned out very nice,” said Charbonneau, who returned to HackUMass for the second time this year.

Funding and organization for the event was made possible by a range of sponsors including big name companies such as the MITRE Corporation, Klynveld Peat Marwick Goerdeler Firm, Verizon and Google according to the HackUMass website. Additionally, HackUMass partnered with several other organizations including the Berthiaume Center for Entrepreneurship and three of the UMass colleges: the Isenberg School of Management, the College of Engineering and the College of Information and Computer Sciences. HackUMass VI is also a part of the Major League Hacking 2019 season, the official collegiate hackathon league.

Chris McLaughlin can be reached at [email protected]