The duo scored their sixth and seventh goals of the season, respectively 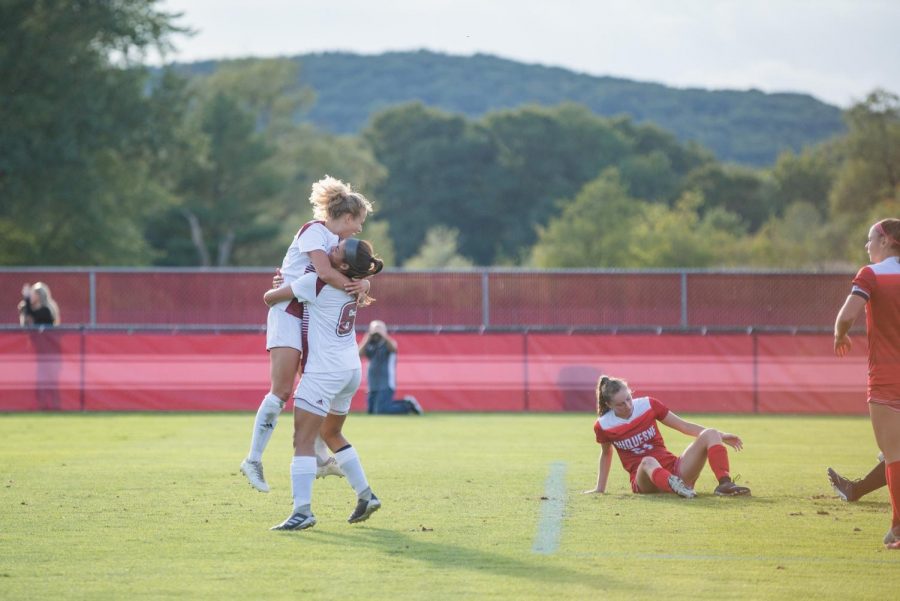 “We got off to a really good start,” said coach Jason Dowiak. “We came in with a lot of confidence to try and keep possession and move off the ball and create plays, and it just happened to start out perfectly in that first minute.”

The Minutewomen were able to build momentum early with a first minute goal from Jenny Hipp. From the kickoff, the UMass defense was able to quickly build into an attacking position, moving the ball to Hipp in the midfield. Hipp slid the ball to Julia Taffuri on the edge, who passed the ball back inwards to Hipp, who was then able to one-touch the ball inside the post for her sixth goal of the season.

After claiming the lead early, the Minutewomen were able to dominate time of possession in the first half. Keeper Peyton Ryan was able to make a pair of heroic saves to maintain the UMass lead going into half time.

“We maintained possession,” said Dowiak “It was a good first half, we just didn’t put away some chances that we probably should have. Peyton made two unbelievable saves, I don’t even know how she saw the shots to be honest with you. There was a lot of traffic on both of them.”

Notably, Mollie Williams started in the back in place of senior Jenna Thomas, who was serving a suspension after seeing a red card against George Mason. Williams made the most of her opportunity, saving a shot on the goal line while playing the entire 90 minutes.

Coming out of halftime, the UMass effort faltered a little bit, allowing Davidson to tie the game up with a goal in the 50th minute.

“In the second half we came out flat and they had a few chances early on,” said Dowiak. “They hit the post and eventually scored. We had to get on them a little bit as a coaching staff on the sideline because as a team we were taking it a little too easy. But after we found the fight back in us late in the second half, the girls really responded well with a good level of energy.”

Though she didn’t score, forward Rebeca Frisk played tremendously in the game.

“Beca Frisk had a great game all around,” said Dowiak. “I wish she would’ve scored one of her chances because she really had a complete game otherwise, but she created this moment between her and Erin and Lauren to get the game winner in the last minute.”

Approaching the end of regulation, the UMass offense was able to build one final attack to try and break the tie. Nearing the end of the 90th minute, the the Minutewomen were able to move the ball into the box, leading Lauren Bonavita to bury her seventh goal of the season for the win.

“We were able to break out from our back line,” said Dowiak. “Dani [Sclafani] initially found Jenny who then found Erin [Doster] and Erin turned, flipped the ball to Beca who cut it back to Lauren. Lauren kind of moved her way through to pick up the ball and beat the keeper high to the near-post side. It was some good soccer but also some grit to get through the traffic and find the actual finish.”

After working on finishing their scoring chances all week in practice, the Minutewomen were able to translate their practice into game time skills in the most important moment of the match. The victory marks the first time in three games that UMass has been able to score more than one goal.

“It’s the first game we scored multiple goals in a game in a little while which is nice,” said Dowiak. “I’ve been saying if we score two goals in a game with how strong our goalkeeper and how defensively organized we are, we should win games. Two goals should be enough to win. So I’m happy we were able to produce. It’s still just fine tuning those moments to finish off when we create chances, because we create many.”

While waiting until the last minute to score the game winner isn’t ideally what Dowiak wants from his team, the first-year coach is proud of his team for fighting through the adversity that comes playing late season games.

“I think the biggest thing to take away is that we, in spite of giving up a goal and giving up the lead there, we found a way to be really resilient and create chances and inevitably find the winning goal again,” said Dowiak. “I’m proud of our team. It’s not easy any more. It might’ve been easy at the beginning of the year, and some of that was confidence and maybe the level of competition.

“But it’s not easy when you get to the later part of the season and into conference play. They are just showing tremendous resilience and finding ways to compete and ultimately win games.”