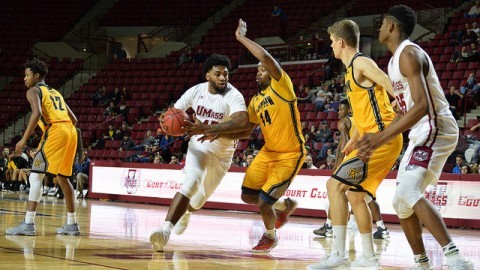 Rashaan Holloway is very aware of his biggest weakness.

Days away from returning to competitive action for the first time since last December, the 6-foot-11, 310-pound center has been focused on improving his defense, specifically against the most common strategy that teams utilize against him — the pick-and-roll.

“Every day,” Holloway said. “We work on it every day. I wish teams would pick and roll me right now. I’m very confident about the pick and roll.”

As destructive as he is on the offensive end and as menacing a rim-protector as he may be, Holloway’s defensive struggles often come when teams with great point guards put him in the pick-and-roll, trying to get him to switch when the screen comes.

Holloway can man up just about every frontcourt player in the A-10, but when he’s forced onto the perimeter against quick, shifty guards, problems arise. And in a conference that’s stacked at point guard — Saint Louis’ Jordan Goodwin, Davidson’s Kellan Grady, Rhode Island’s Jeff Dowtin, George Mason’s Otis Livingston II, the list goes on — keeping that tactic at bay will be a huge factor in keeping Holloway on the court.

“Every day. It’s what we do on offense so obviously we’re working on it every day,” said UMass coach Matt McCall. “I thought Saturday when he came back, he elevated practice a little bit. I thought he was a presence defensively.”

Holloway missed a few days of practice with a hamstring issue, but returned last weekend at “full go, no issues,” according to McCall.

“He’s just got to be more disciplined being in a stance, not reaching,” McCall said. “Our whole team does. We tend to gamble, we tend to reach, we tend to try to make ‘hero plays’ especially on both ends of the floor. He’s just got to get a lot more disciplined in his coverage. He knows what we’re doing. He’s been in our program now going on his second year as far as our system and our style. We’ve got to continue to evolve defensively as far as what we’re going to do in our schemes. Scouting will dictate some of that. For right now, he’s got to continue to get himself in shape.”

Conditioning is the other half for Holloway, who’s struggled at times to keep in good enough to shape to play at the highest level. It was a point of emphasis for the towering center over the summer, as it always has been. While the conditioning comes together, the game plan remains the same for Holloway:

“It’s not a secret,” Holloway said. “It’s just about being more mobile, and focusing on what strategy we’re going to use when we run into the pick-and-roll. Just keeping my feet down and making sure I’m playing solid defense and not overplaying it, underplaying it, making sure I’m up on the guard, keeping my feet above the three-point line and just playing great defense.”

Holloway’s stature and style run counter to McCall’s penchant for going small and playing with long, switchable defenders all over the court, but Holloway’s post presence is too valuable to overlook — though he can’t switch onto guards and hold his own the way that Jonathan Laurent and Sy Chatman may be able to, he’s a walking mismatch underneath for nearly every team the Minutemen see. As a result, McCall is continuing to find ways to keep his biggest weapon on the floor.

“There’s different coaches,” McCall said. “Obviously you don’t always get an opportunity to talk to them. Matt Painter has some really, really big frontcourt players. I’ve known him for a while, back to my days at Florida and some other clinics — then you watch film. A few years back, Xavier had a really big guy, obviously with what UCF is dealing with Tacko Fall in the paint — Rashaan’s obviously not that tall — but you watch different film and see what teams are doing because you’re always trying to get better. If there’s something that we can pick from someone else, that will help our team. Nobody wants to get better than I do.”

McCall has spoken a lot about being able to run different lineups and exploiting his newfound depth and versatility in year two — but he’s got one of the most imposing players in the A-10 back for one more year, and he’ll do all he can to keep his best rim-wrecker on the floor, and out of the pick-and-roll.