Minutewomen tied for first place in A-10 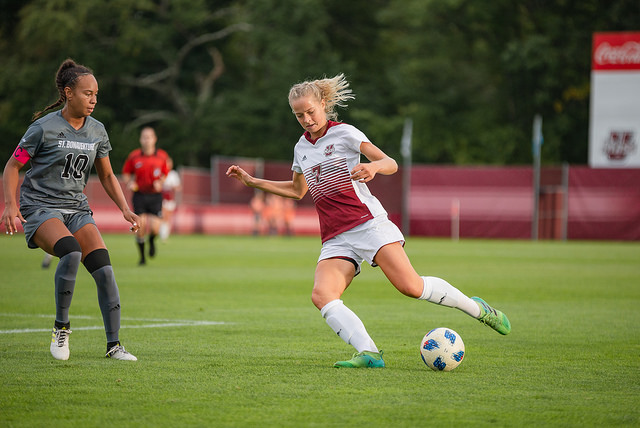 The Massachusetts women’s soccer team continued its impressive season on Sunday afternoon with a 3-1 win over La Salle, leaving UMass now tied with Saint Louis and Fordham for first place in the Atlantic 10.

The Minutewomen (9-2, 4-0 A-10) got on the board in the 20th minute off a play that UMass coach Jason Dowiak had the team practicing this past week.

“We scored our first goal off of the exact moment we felt like we could create chances from,” Dowiak said. “Sarah Beaulieu got down the left side and cut the ball back into Jenny Hipp and was able to create a moment that we’d talked about for the last couple of days that we thought would be successful against this team about how they defended.”

It was Hipp’s fifth goal on the season.

The scoring continued for UMass in the 36th minute when Jenna Thomas headed in her second goal of the season off a corner kick by Signe Schioldan to make it 2-0.

“We gave up a goal that was disappointing because we had the numbers in front of our goal to deal with it,” he said. “It was just a ball that happened to go through. Their kid won an individual battle to get a touch on the ball.”

Heading into halftime the message was clear and concise from the coaching staff.

“At halftime, all we asked was just [to be] little bit sharper,” Dowiak said. “We had a good first half. We just asked that we be as close to perfect as we could be in the second half.”

Though its a tall task to be close to perfect, the Minutewomen seemed to carry out the captain’s orders as they opened the second half with a goal to make it 3-1, with Thomas heading in her second of the day off a 20-yard pass from Sini Laaksonen.

This win came on the heels of a team meeting on Saturday night run by Dowiak.

“We had a long team meeting last night,” Dowiak said. “It was about doing the little details better today and being a little bit sharper in our decision-making and our approach to how we deal with a team that’s really physical and athletic.

“Our players were on another level when it came to how ready they were to anticipate the next play. I felt that we frustrated them by the end of the game with our ability to keep possession and our ability to keep playing forward to players that were behind the next line of defense. Everybody stepped on the field and made genuine contributions.”

Dowiak went on to explain the magnitude of this game.

“Just because of the way that they play, that was probably the most difficult game we’ve had all season,” he said. “They’re very fast and athletic and they’re very direct in their approach. It’s worked for them in the past being the team that won the conference last year.”

Fortunately enough for the Minutewomen, they were up to the challenge.

Ryan had two saves on three shots on net. La Salle had eight total shots while UMass had 15.

The Minutewomen hope to continue their hot streak on Thursday on the road against Fordham at 7 p.m.