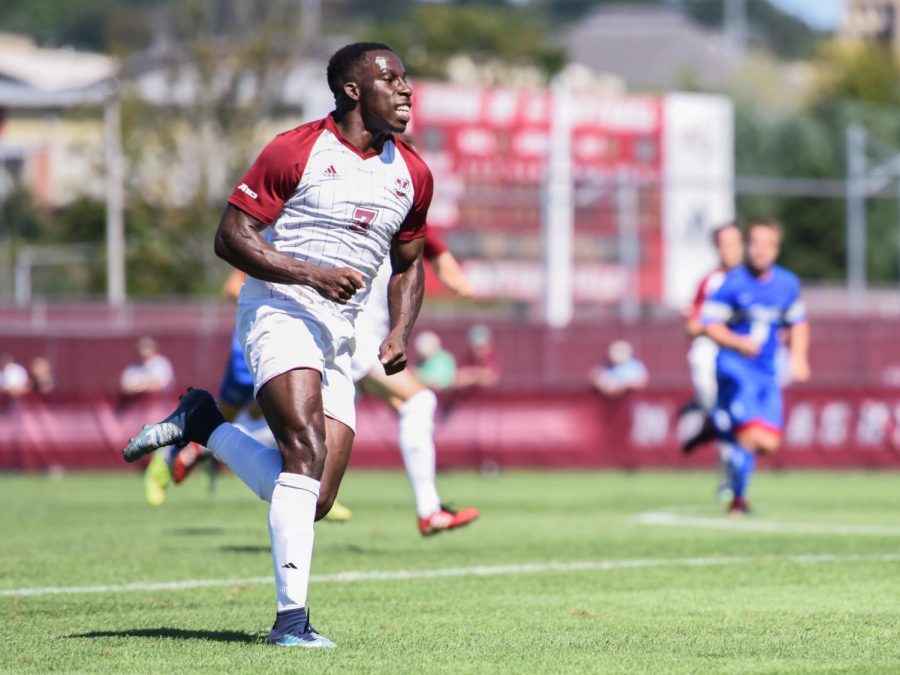 With its first three points of the conference schedule safely in hand, the Massachusetts men’s soccer team faces another major test on the road at Rhode Island on Wednesday.

“They’re a very good team,” said UMass coach Fran O’Leary. “They’ve received votes, they’re in and around the top 30 in the country, and our next two games are on the road against probably the best two teams in the conference. We played VCU, and then, Fordham and Rhode Island are probably the three best teams in the conference, so we’re going to have our hands full. They’ve got an experienced team, return a lot of very good players, I think it’ll be a great matchup. We want points on the road, we need points on the road, and the sooner the better.”

The Minutemen enter the midweek matchup with a more balanced scoring attack than last year’s iteration — DeAndrae Brown leads the way with six goals on the year, but Davis Smith and Jack Fulton are right on his heels having bagged four goals this season. Freshman James McPherson has struck twice for the Minutemen this fall, and Brandon Merklin and Jared McCleary each have a goal to their credit as well.

“It’s great because you don’t want to be relying on one guy hitting double-digits all the time,” O’Leary said. “So it’s nice that we’ve had goals from different players on the team, it’s been a real positive for us.”

“The goals are kind of spread out,” Brown said. “I think it’s more on our offense, we have a great attacking offense that’s very versatile. I just happen to be on the end of a couple of them. There’s a lot of chances in different areas, so there’s a lot of chances for everyone to score in certain situations.”

Despite only having started once all season — against Mason on Saturday — Brown’s six goals leave him joint-second in the conference.

“He’s terrific, DeAndrae’s been fantastic,” O’Leary said. “He’s come into a starting role [on Saturday], he played practically every minute, he was a physical presence, the vast majority of his shots end up on target. He’s scored six goals now with some limited playing time, but his play sort of demands more playing time and he’s getting that now. He more often than not hits the target, even if he doesn’t score he works the keeper, so we’re very, very pleased with him.”

Brown’s exploits and the overall spreading of the wealth have also taken the goalscoring pressure off of Smith, who led the team and was second in the A-10 in goals in 2017. Though he isn’t pumping in goals at the rate he did last fall, Smith has still been an impact player in the center of the park.

“[Smith]’s been fantastic,” said O’Leary of his towering sophomore. “He’s come into the midfield, he had a dominant performance against George Mason, he’s always looking to get in the box. There’ll be more goals from Davis before the season’s over.”

The Minutemen head to Kingston with a boost of confidence from Saturday’s win, with the first points of the season finally out of the way.

“It was three points that we definitely needed,” Smith said. “We understood the importance coming in, we took it very seriously, and those three points were a big first step but we’ve still got a long way to go.”

The A-10 season is only three games deep but the Minutemen find themselves in ninth place, on the outside looking in at the conference tournament picture. UMass is far from out of it with 15 points left to play for, but O’Leary and his men need a solid run of form over the final five games to secure a tournament berth and, ideally, a home game in the first round.

“It’s good to get the first win, but we need a few more to get in [to the A-10 tournament]. Our guys, we’ve got to maintain the same urgency, the same commitment. We’ve played three games now and created a lot of opportunities, and now we want to go get a clean sheet sometime over these next two road games, get a shutout and take our chances, then we’ll feel a lot better. Once we get through these two games, we’ll have a real feel for where we are, because we’re playing the cream of the crop in the league right now.”

The Minutemen and the Rams will kick off at 7 p.m. on Wednesday.