Minutewomen knocked out of A-10 tournament by George Mason

Surprising, successful season comes to an end for UMass 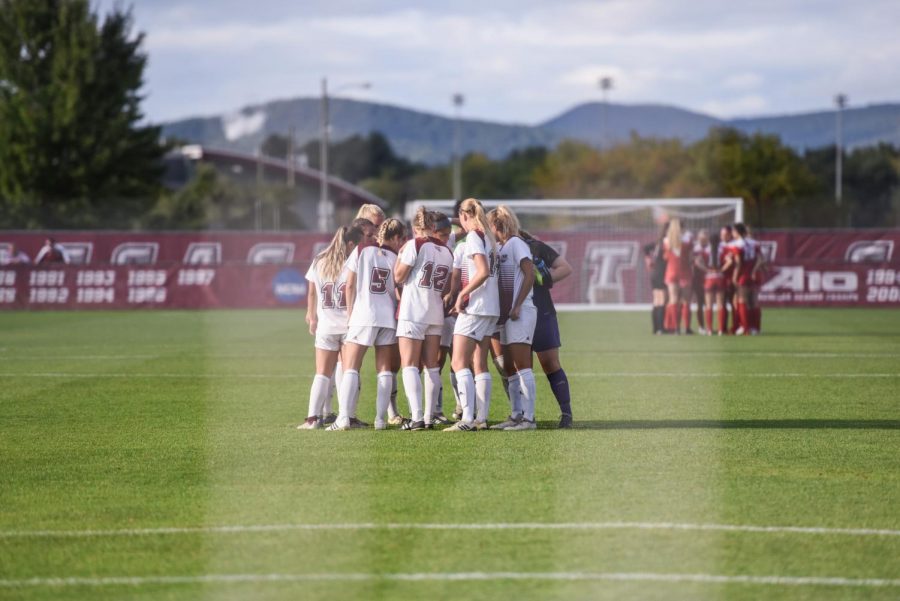 The Massachusetts women’s soccer team’s surprising season came to an end on Saturday with its 2-1 double overtime loss on the road to George Mason in the first round of the Atlantic 10 tournament.

The Minutewomen (11-6-1, 6-3-1 A-10), who were picked by coaches to finish 10th in the A-10 prior to the season, finished the season fifth in the conference in the regular season matching them up with the Patriots in the A-10 quarterfinals.

After a scoreless first overtime period, George Mason controlled possession for much of the second period. In the 105th minute star freshman Emma van der Vorst got her head on a cross and directed the ball into the left side of the net.

The goal brought an end to UMass’ season, bouncing from the A-10 tournament.

“I’m so proud of the girls,” head coach Jason Dowiak said. “That was an amazing effort against a really good team.”

Midway through the first overtime period with the score knotted at 1-1, van der Vorst redirected a shot towards the left the side of the net, on a trajectory that likely would have ended the game. Senior goalkeeper Peyton Ryan had other ideas, leaping at full extension to not only prevent the goal but corral the ball and prevent the rebound.

“It was an incredible save,” Dowiak said, “an ultra-athletic, full extension save to her right side. It’s what we have come to love about Peyton and expect from her.”

The Patriots got on the scoreboard first in the 39th minute when Emily Bradshaw scored her first goal of the season off a loose ball in the box.

The George Mason lead would hold for just 33 minutes, as Jenny Hipp slotted home the equalizing goal. A Lauren Bonavita ball through the air found Hipp open on the far post where Hipp took one touch before beating Patriot keeper Morgan Symmers to the far side.

“The team is so resilient,” Dowiak said, “there’s always enough time for another chance to be created.”

UMass narrowly missed tying the game in the final minute of the first half when a bouncing ball had to be cleared off the goal line by George Mason.

With the score level, the Minutewomen seized momentum, pushing for a game-winner before the end of regulation.

UMass came close to winning the postseason game on numerous occasions, the closest coming in the 90th minute. With a chance of preventing overtime Erin Doster was fed the ball in front of goal and tried to put a shot on goal on the half-volley, but the attempt went just wide of the left side of the goal, missing victory by mere feet.

“We probably created more chances tonight,” Dowiak said, “good chances, than we have any other game. I think we deserved to win.”

Though the Minutewomen’s internal expectations may have been to go further into the postseason, simply getting there in the first place was beyond what most saw coming out of a squad that finished ninth in the A-10 a year ago.

Though they may have hoped for more, Dowiak does not feel anything but pride about the way UMass played Saturday night.

“The overwhelming feeling is just how proud I am of all of them” Dowiak said, “for the effort they put in and the quality that they played with tonight.”