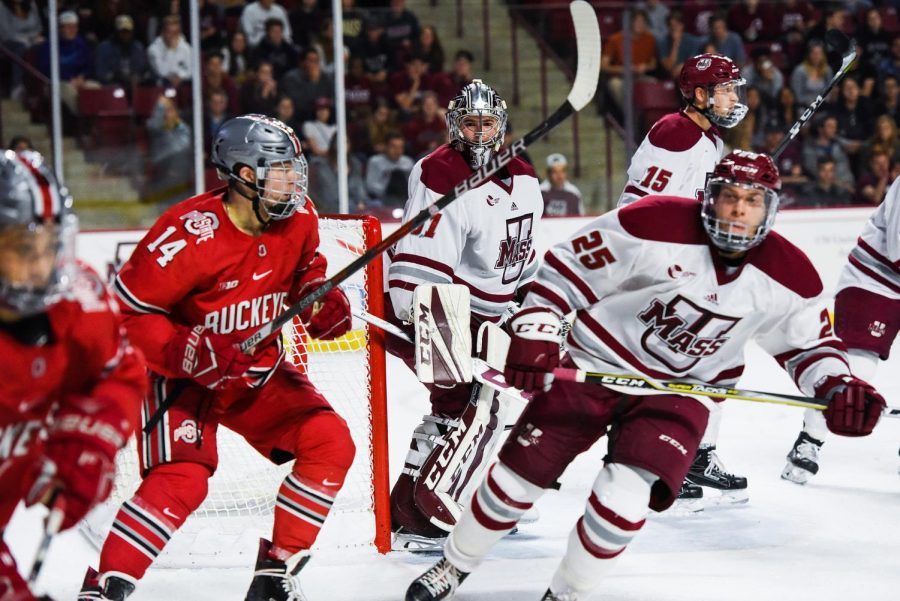 Ohio State (2-0-0) opened its season down at Arizona State (2-2-0) with two wins over the Sun Devils. The Buckeyes opened the two-game sweep on Friday, a 3-2 win with senior goaltender Sean Romeo defending the net.

Romeo, coming off of his first season after transferring from Maine, had 24 saves in the net Friday. The Sun Devils kept the pressure on the Buckeyes, putting up two points by the end of the second period. However, Ohio State kept the momentum up and pushed ahead with two power play goals.

Senior Freddy Gerard struck first, scoring the first Buckeye goal 15 minutes into the first period, leaving Arizona State trailing behind. The Sun Devils quickly recovered in the second, scoring their first goal off of a power play 50 seconds into the period. However, it wasn’t enough to keep the momentum going, as the Buckeyes quickly put up two more to leave the score 3-1 by the end of the second period.

Senior Dakota Joshua and junior Carson Meyer tallied the two goals for the Buckeyes in the second, both on the power play, which proved to be too much for the Sun Devils to recover from in the third period.

Arizona scored the final goal of the game in the second period, with two seconds left in the period. Despite killing off three Ohio State powerplay opportunities, the Sun Devils couldn’t recover the one goal deficit.

On Saturday, sophomore Tommy Nappier started in goal, successfully leading the Buckeyes in a 3-0 shut out over Arizona State with 27 saves, stunting the Sun Devil offense and powerplay.

The second match up on Saturday started off tied 0-0 for the first 39 minutes, before Buckeyes junior Ronnie Hein clinched the first goal in the second period, putting the first point up on the board. The goal was allowed by a broken Arizona State play in front of the net.

The momentum carried from there, as Ohio State senior Mason Jobst scored the second goal of the game off of a penalty shot. The Sun Devils continued to battle, killing off all power plays including two 5-on-3 chances for almost three minutes, but it wasn’t enough to hold off the Buckeyes.

The last goal was scored by Hein again on an empty netter in the third period, sealing the Sun Devils’ fate.

The two wins put the Buckeyes on the top seat in the USCHO.com and USA Today/USA Hockey Magazine polls. Ohio State managed 38 of 50 first place votes in the USCHO rankings and 25 of 34 in the USA Today poll. This is the first time Ohio State has started its season with a 2-0 lead since the 2007-08 team defeated Mercyhurst and Wisconsin to win the Lefty McFadden College Hockey Invitational.

UMass (2-0-0) and the Buckeyes met in Amherst last season, with the Buckeyes posting two wins, a 3-1 victory Oct. 20 and a 3-0 win in the next night. The two teams had only met once before in December of 2002, when they faced off in a 2-2 overtime tie at the Florida College Classic in Estero, Florida.

The Minutemen head to Ohio State to face off this Friday at 7 p.m. and Saturday at 5 p.m. at the Valley City Arena.