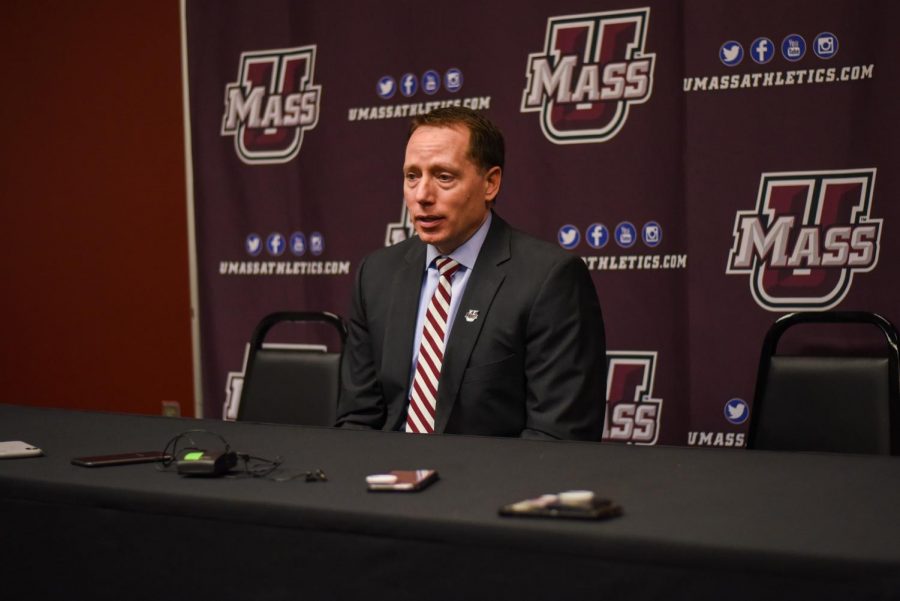 Greg Carvel enters his third year at the helm of the Massachusetts hockey team. On Monday, Carvel shared some of his thoughts on the hockey program during Hockey East Media Day at TD Garden in Boston. The Hockey East 2018-19 Preseason Coaches’ Poll was released early Monday morning, which saw UMass slot in at sixth place. Boston College earned the top spot among the 11 teams.

Question: Any initial reaction to being ranked sixth?

Q: What’s your take on just the overall competitiveness of Hockey East in general as you enter your third year?

GC: I think it’s not just through our league, it’s through the whole country. I say this to our guys, if you don’t play to your standard that you’re capable of you’re probably going to lose. So, we were talking about it last night, the Atlantic Conference is getting stronger, the ECAC has always been strong. Every night you have to be at your best. That’s what we preach to our guys is consistency and playing to a certain level. We’ll have to do that to finish mid-pack and if we can be consistent every night we’ll try to sneak a little bit higher than sixth.

Q: One of the big changes this offseason was Hockey East switching to eight teams for the playoff format. Do you have any initial thoughts on that?

GC: Well my initial thought was it was a lot of fun last year to host a playoff series. [It] built a lot of excitement around the program and around the school and going to an eight-team [playoff] limits… only four teams in our league are going to host playoff series on campus. That part is not ideal. The positive side of it is it gives us an extra week to spread out our regular season schedule. So last year, we had a tough schedule, we played three Tuesday games over a month period and it led to us losing some games where the young team we had, we were pretty tired. The positive is it balances our schedule throughout the year, allows us to be more rested for each game and then you got to really hope you can break into that top four, which obviously isn’t very easy to do in Hockey East.

Q: I believe another rule change was allowing 19 skaters to dress [instead of 18.] Do you have any idea how you would go about that [change]?

GC: I don’t necessarily like that rule, I voted against it but higher powers make these decisions. If an opposing team takes a five-minute major and the kid gets kicked out of the game, that’s a distinct advantage, especially if it’s a defenseman. But now, what I’ll probably do is dress seven defensemen. If you lose one defenseman it changes the makeup of your team pretty quickly so we’ll most likely dress an extra defensemen with that kid knowing he’s probably only going to play if there is an injury, a kid gets kicked out or you got guys that are pretty tired. So, we’ll always dress the extra guy just to be safe but that guy who dresses knows that he may just be a grocery-stick separator between the forwards and the defensemen.

Q: Have any of the returners caught your eye in terms of conditioning or skillset from what you’ve seen so far?

GC: As strong a year as Mitchell Chaffee and Oliver Chau had last year, Phil Lagunov, they’re a year bigger, stronger, older. That whole class, [John] Leonard, [Cale] Makar, [Mario] Ferraro, [Jake] Gaudet, all of them and I’ve said this many times, it’s from the end of the freshman to the beginning of sophomore year where kids make their biggest strides in maturity and physical strength. That whole group, that whole sophomore class, I’ve been really impressed. I apologize if I left any of them out, Matt Murray, there’s so many of them I’m trying to recall all of them.

Q: About Leonard getting drafted, do you think he’ll use that to maybe just add even more motivation and urgency to his game?

GC: At the time he got drafted, I thought it was great timing because he grew so much last year as a player, on and off the ice, and it was a reward for him. So to me it was great to have a kid really sacrifice, change his ways in a positive way and become better and get rewarded for it. For him, leading our team as a freshman in scoring when first half of the season, we didn’t know if we could trust him on the ice, but he proved a lot to us. I think it was a great draft pick. He’s such a talented player and he’s learning how to play the game the right way. I think it’ll compel him to another strong season.

Q: You talked about the sophomore class specifically getting stronger physically, do you think that’ll add to the overall confidence level of the team moving forward?

GC: We try to play to an identity that’s hard to play against because of our style and compete level but when you add that more physical strength and size and heaviness on the puck I think it’s going to help us a lot. Again, because that class makes up half of our team and play the most important minutes on our team. I think it’s huge. That whole class was a transformational class, we’ll be fortunate to ever have a class that deep, that good again. This program will absolutely rise with that class.

Q: I think it was during the second half of last season that you talked a lot about Cale being just close enough to kind of breaking out offensively. Then that [Vermont] playoff series happened and he seemed to produce pretty well. Do you think at the start of this season he’ll get to that quicker than he did last season, as far as offensive output?

GC: You could feel it at the end of last year that he was just ready to pop and I thought he did over the last part of the year. He’ll carry that on from day one and be ready. Again, he got a lot of scoring chances last year, he just didn’t finish as much as he or I would have wanted him to. That’ll be the difference this year. He’s got to be able to finish when he gets the puck in good places. We’ve asked him to work on his shot and get pucks to the net but he just continues to develop and is becoming a more and more of an impressive player each day.

Q: On the defensive group in general, is this the most confident you’ve been in those six guys since you’ve been at UMass?

GC: Not right now, no, because [Jake] McLaughlin and [Ivan] Chukarov are out for the first couple games. I’m quite nervous actually on the backend, four freshmen. Even if two of them are All-USHL players it takes time to adjust. So four freshmen on the backend, makes me nervous but I’m really excited to get McLaughlin and Chukarov back because they’re veteran players and they’re very strong, good Hockey East players. When we get those two guys back I think by Christmas time you’re going to see a really strong backend for us.

Q: So is it maybe safe to say that you’re going to be relying on your goaltending a little bit more to start the season than you’re probably used to?

GC: Hopefully we won’t be saying that, but yes. We need that, we need our goaltending to be better than last year. We need a solid save percentage that allows teams to win. I thought last year we were a very good five-on-five team, our special teams and at times our goaltending wasn’t strong enough. We’re really focusing on both of those aspects: the goaltending and our special teams. So if we can get a power play [percentage] that’s reasonable and a penalty-kill that’s solid and a good save percentage, we’ll be very tough to beat.