Junior forward nets her seventh goal of the season 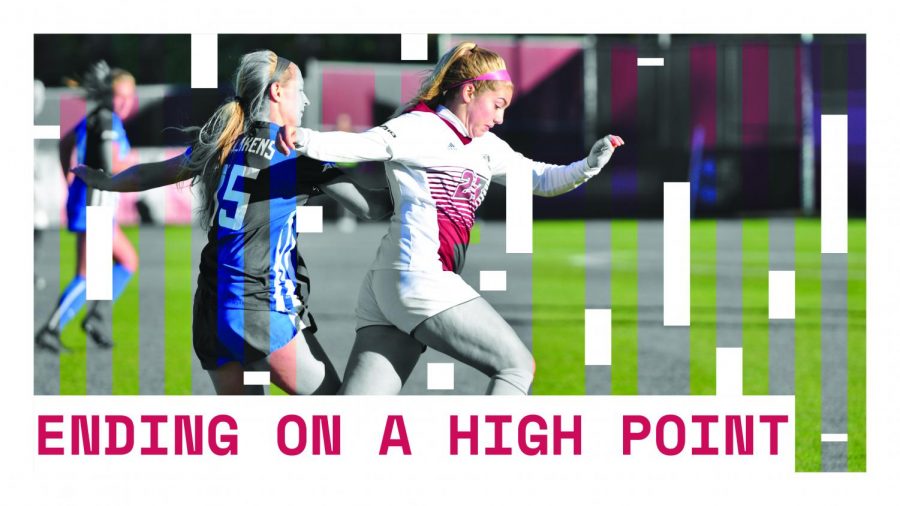 In its final game of the regular season, the Massachusetts women’s soccer team was propelled to a 2-0 victory over Dayton by the exemplary play of its two forwards, Rebeca Frisk and Erin Doster. The victory marks UMass’ 11th of the season, a four-win improvement from last season.

“The first half was a battle between two teams that were desperate to not finish in that eight spot,” said coach Jason Dowiak. “Both teams were a lot more direct in the first half, and a lot more eager to go forward and play. We settled down in the second half and really just started to combine and create some great opportunities.”

The Minutewomen (11-5-1, 6-3-1 Atlantic 10) broke out to a slow start, only getting off two shots in the first half. The first real scoring opportunity against the stout Flyers (8-8-2, 4-5-1 A-10) defense didn’t come until a 25th minute corner kick by Jenny Hipp headed on goal by Lauren Bonavita was saved by Dayton goalkeeper Kaelyn Johns.

However, opening the second half, the Minutewomen came out full of energy, revamping their offensive game plan.

“It was just about possession,” said Dowiak. “We maintained the ball a lot better, and created possession higher on the field to create those shots. In the first half it was much more of a game of chase. We’d knock long balls over their center back and try to run on to them and press them, and if they got out they would do the same to us. It was really back and forth. In the first half no one really had great possession and thankfully we settled in during the second half and played the way we want to play.”

Controlling possession allowed the Minutewomen to fire 14 shots in the second half, an enormous improvement from their first half struggles. Carrying a 0-0 tie into the 68th minute, the UMass offense was able to finally capitalize on their high-volume offensive attack as Frisk broke free from the defense to net her seventh goal of the season.

“[Frisk] created so many opportunities getting into the box, getting on the ball,” said Dowiak. “She got in behind on the left side, beat one defender and was facing the keeper and hit an absolute laser that hit off the low far post and banked in. It was just a technically impressive strike of the ball, but she did it at full speed on the dribble, and I wouldn’t say it was an easy angle either. It was pretty special.”

With the UMass offense struggling as of late after being shut out in their previous two games, Dowiak elected to start the game with Frisk on the bench in order to give other players offensive opportunities. However, Dowiak was impressed with what he saw out of his striker from the bench.

“[Frisk] had an amazing game,” said Dowiak. “It was the first game she hasn’t started in a little bit. We talked about the impact that she needs to have, and she came in and proved what she’s capable of. She scored a great goal and almost had a second one. She was just a different type of threat today.”

Leading late into the game, the Minutewomen were able to expand their lead and secure the victory with an impressive 83rd minute goal from the feet of Doster. Not known for her size, Doster was able to push her way past the bigger Flyer defenders to fire one in off the crossbar for her fifth goal of the season.

“Erin Doster’s goal was against their biggest, strongest, athletic center back, and she just didn’t want to give up the ball,” said Dowiak. “She pretty much bulldozed her way through, gaining possession and then finished a really great shot off the crossbar that went down and in. It was a great offensive performance, but we defended as a team and kept really good possession in the second half.”

The victory over Dayton has UMass finishing in fifth in the Atlantic 10 conference, exceeding preseason expectations, when A-10 coaches ranked the Minutewomen 10th to start the season. For a team that has surely opened some eyes this year, UMass will be looking to prove it can continue its strong play into the conference tournament.

The Minutewomen are slated to open the first round of the A-10 tournament this Saturday at George Mason at 7 p.m.