Bamford conferred with several campus leaders before making his decision 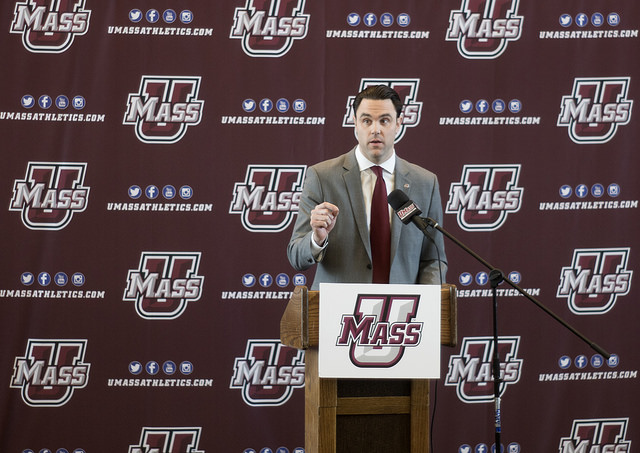 After the Massachusetts football program made national headlines for head coach Mark Whipple’s use of the word ‘rape’ during a post-game interview in Ohio, Athletic Director Ryan Bamford and Defensive Coordinator Ed Pinkham — serving as interim head coach — met with local media at the Mullins Center on Tuesday.

“Obviously, it’s been a challenging 48 hours for us and our football program, just with what’s transpired,” Bamford said. “We’re looking forward not only to this week and playing South Florida but looking forward to what the second half of our football season has in store for coach Whipple and our staff and our student athletes.”

Whipple received a one-week suspension, which prevents him from attending practice and taking the field with the team for Saturday’s contest against South Florida. Along with the suspension, the four-year coach is required to attend sensitivity training provided by the University.

Bamford said that the human resource department for the team is working on scheduling a one-on-one training session for Whipple with the workplace development office on campus. He expects it will happen in the next week or two.

“I can just tell you the dialogue and the conversation that we had on Sunday was thoughtful,” Bamford said of the “several campus leaders” he conversed with before making his decision, “and I think really we didn’t do anything in haste, we didn’t do anything quickly and we made sure that we were thinking about of all the things here — all the ingredients — that went into the decision.”

Bamford assured that he never anticipated such an incident from Whipple, who officially received a contract extension through the 2020 season from Bamford in late April, while also stating the comment is not “indicative of what we’ve come to know from coach Whipple.”

While discussing the suspension with the team, Pinkham told the players not to focus on what was out of their control. He intended to gear their minds toward having an intense practice and giving themselves the best chance for victory this upcoming weekend, hoping not to waste a single day of preparation.

“Mark addressed — he didn’t just leave campus — he addressed it with the players and he gave them the opportunity to talk,” Pinkham said. “I don’t think anything will change when Mark gets back, I think the kids will be excited. We talked about not having our leader with us at the time but we have to march on so we do the best we can.”

Pinkham was present during Whipple’s conversation with the team and thought he did a “great job explaining to the kids.” Whipple told them he made an error in judgement and that he was sorry for it, adding that he didn’t mean what he said in the way that it came out.

Regardless of how Whipple intended his comment to be perceived, media outlets from ESPN to the New York Post have put UMass in their running headlines following Whipple’s comment. When asked about future recruits and the future of the program, Bamford wasn’t concerned.

“I’m not worried about [future recruits],” Bamford said. “I think this was an isolated incident and from our standpoint again, I think at the end of this week when coach Whipple gets reinstated, he’s the leader of our program and we’re going to go forward.

“I don’t anticipate that it will hurt us at all in recruiting,” he added, “and obviously it’s been covered more widely than just this region, but I would say that I think we got a lot of football left. I think that that certainly contributes a lot to what recruits think about our program, and if we have a level of success in the next six games, then that will certainly help when we come to sign young men in December and in February.”