Sen. Elizabeth Warren says she will take a ‘hard look’ at running for president in 2020

Immigration, the environment and Puerto Rico were also among the topics discussed 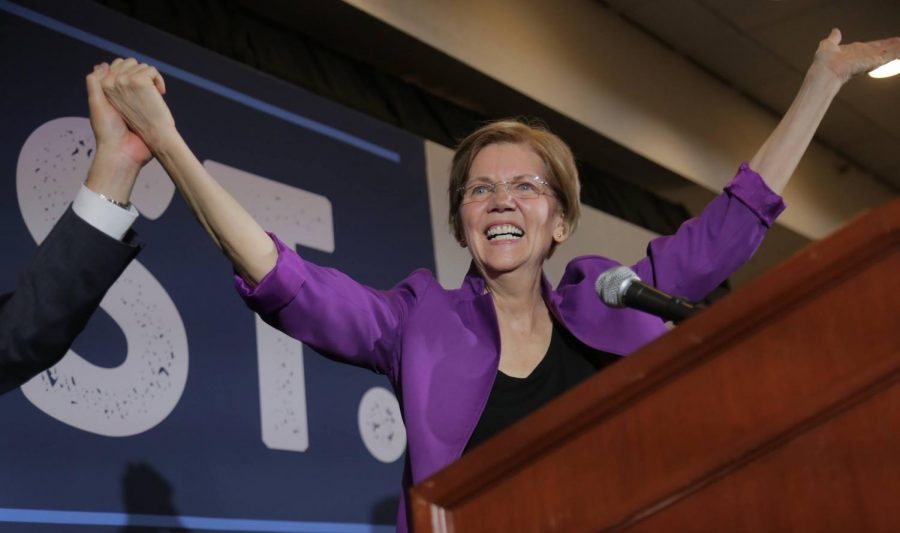 On Saturday at the Holyoke Town Hall, Sen. Elizabeth Warren was presented with the inevitable question of whether or not she would be running for president.

Her response: “It’s time for women to go to Washington and fix our broken government and that includes a woman at the top. So, here’s what I promise, after Nov. 6, I will take a hard look at running for president.”

The town hall gathering opened with Holyoke Mayor Alex Morse, who introduced Warren with, “She’s recently been fighting for immigrants, the environment, women, the LGBTQ community. But most recently, she’s been fighting for Puerto Rico.”

“We couldn’t be more proud of her and her efforts in D.C.,” he said.

The crowd cheered as the senator took the stage. Warren began her speech by first addressing the recent Senate hearing on the sexual assault allegations against Supreme Court nominee Brett Kavanaugh.

“I watched 11 men who were too chicken to ask a woman a single question,” Warren said. “I watched as Brett Kavanaugh acted like he was entitled to that position and angry at anyone who would question him. I watched powerful men helping a powerful man make it to an even more powerful position.”

“So, I’ll tell you this, today I am angry,” Warren said. “I see people struggling with medical problems and watched the Trump Administration as they try to roll back protection for people with pre-existing conditions and undercut Medicaid and Medicare, and yes it makes me angry.”

Warren continued, “I see the Trump administration do too little too late for Puerto Rico and then turn around and lie about the deaths. Yes, that makes me angry.”

Warren said that she is using her anger to fuel her motivation until the midterm elections.

After Warren finished speaking, Holyoke Councilor Jossie Valentine came on stage to open the forum for questions. Citizens lined up, taking the opportunity to speak to their minds.

Questions ranged from the Time’s Up movement to eliminate sexual assault and inequality in the workplace to environmental issues, high tuition cost, student debt and healthcare.

When questioned about her plans to save the environment, Warren responded, “I’m going to say something because I feel comfortable here, being back in Massachusetts, in Holyoke… I believe in science.”

She promised that if the Democrats take back the Senate, there will be laws put in place to make improvements in the environment.

One of Warren’s main points during her rally was the issue of higher education tuition.

Coming from a “paycheck to paycheck” family, Warren did not have the opportunity to attend an expensive university. Warren offered the solution of reevaluating the national defense budget and instead trying to reduce student debt.

“You know what should be lumped with national defense? Teaching in a public school,” Warren said.

Hundreds of people were in attendance of this event. One of them was Angelina Egan, a student at Mount Holyoke College.

Egan said she was inspired by Warren, and that her “main take away was that she’s really just the lineage institution for us in D.C. She reflected on what we need and I felt like she was able to get the message across to bridge the issues of single issue voters.”

Cassie McGrath can be reached at [email protected]