SGA addresses changes to a wide variety of topics across campus 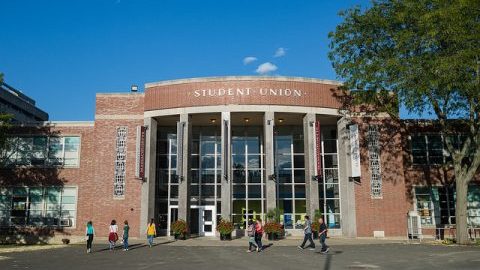 On Monday, the University of Massachusetts Student Government Association spoke about plans for the restorative justice initiative and presented new funding guidelines for student groups. The meeting also addressed a change in plans concerning the endorsement of a letter about UMass football coach Mark Whipple’s recent offensive comments, and made new announcements about changes to the University’s provision of food and local transportation.

At the beginning of the meeting, Vice President Nathalie Amazan discussed the progress and future plans for the social justice initiative that was started last year. Amazan said that, “the campaign goal is to get [a] restorative justice program on the UMass campus that is funded by the University and has ties to local courts.”

Amazan explained that, “restorative justice is an alternative framework for handling wrongdoing. In our society as a whole in the U.S., we have a punitive system that when someone does something wrong, it’s looked at as that person violated a law…restorative justice, on the other hand, looks at violations when someone does something wrong as a violation between relationships and people…so at the basis, it’s about healing. It about accountability to the people and the community at large and the end goal is about building stronger relationships.”

The project is estimated to take seven years to be fully implemented. Pilot programs are being created to engage the community and educate students around what restorative justice is, so that they can be familiar with the language and practices once it is in use. There are also plans to start an introductory series about restorative justice.

Later in the meeting, Chair of the Ways and Means Committee Allie McCandless introduced new funding guidelines for student groups.

“If we can support groups financially, that is kind of the foundation for helping them in tons of other ways,” McCandless said. “We want to position all of our student groups to have the resources that they need to succeed financially and in executing their mission, because that only creates a more diverse and fun and welcoming campus that people can get engaged in and really feel like they belong if there’s huge amounts of student groups executing their missions very well and have the resources they need to do it.”

The SGA said that these guidelines will be the most comprehensive and earliest to ever be released, with access to more resources than ever before.

During this meeting, the SGA was also scheduled to vote on a motion to approve a letter written by the Social Justice and Empowerment Committee addressing the language used by Coach Whipple, but this motion was tabled by the committee.

Timothy Scalona, chair of the Social Justice and Empowerment Committee, explained that the decision by the committee to hold off on voting on the letter was due to a general consensus that the letter needed better language.

“We decided before the meeting that we want to work with the executive and other interested groups to make the motion, first off, more restorative, and, two, to make it more all-encompassing of the culture that that language use can be created in,” Scalona said. “So not so much to look at not only the effects of his language choice on students, but also what has perpetuated that.”

Other important points touched on during the meeting were those concerning upcoming changes to local transportation services.

“Last year there was a discussion about…getting another bus service here on campus for long-distance travel,” said senator Kyle Kendall. “I’m happy to announce that we moved forward to the next step with the manager of UMass Transit.”

A small group of senators will form to continue the process. Senator Robert Kearns also spoke about the Hartford line, which goes through the Pioneer Valley, saying that they are starting up trains from Springfield to New Haven with connections to metro north and New York.

“It would be important that us as students advocate…to have a fixed fare so that people can normally rely on the fare,” Kearns said.

“APO [Alpha Phi Omega] got their food pantry approved…What they are working on right now is figuring out their hours and the shifts that they’re going to have open for undergraduate students as well as for graduate students,” Sullivan said.

Editor’s note: Timothy Scalona is a columnist for The Massachusetts Daily Collegian.