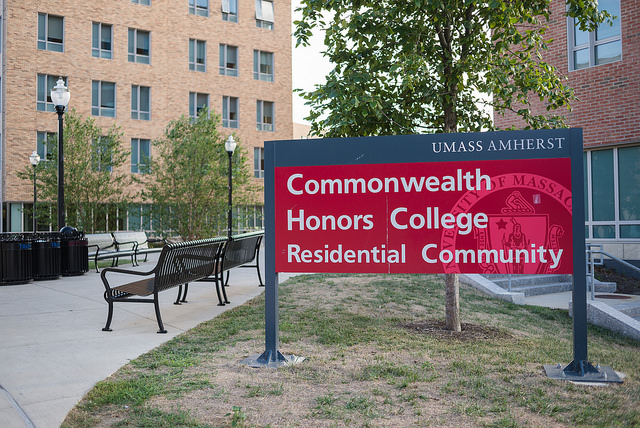 There was a sense of community in the Commonwealth Honors College Events Hall Saturday evening, as supporters of the “Yes On 3” campaign for ballot Question 3 gathered for a talk with transgender politicians Danica Roem and Christine Hallquist.

The Question 3 voter referendum in Massachusetts asks voters whether or not to repeal a piece of legislation from 2016 that prohibits discrimination in public accommodations on the basis of gender identity.

A “no” vote favors the repeal of the current legislation that has been in place for two years, taking away the protections in public accommodations — such as restrooms, hospitals, concert venues and more — for transgender or gender non-conforming people.

A “yes” vote keeps in place the current law, a cause which many University of Massachusetts students are rallying around, including Student Government Association President Timmy Sullivan.

The podium also welcomed Olly Kelly, a women, gender and sexuality studies junior and the current president of the UMass Pride Alliance. They shared their own story, including their part in bringing the original 2016 bill to the state legislature.

“As a transgender youth, I began to articulate my gender identity and educate staff and faculty all over campus. Through these channels, I contributed to 2016 piece of legislation that protected gender identity in public spaces,”  Kelly said.

Kelly discussed this importance of community for trans and gender non-conforming youth, and how they needed #YesOn3 because these groups are “still begging for a right to exist” in society.

The main spotlight was then on trans politician Christine Hallquist, the Democratic candidate in Vermont’s gubernatorial race. Hallquist shared her history as the first CEO of a company to transition on the job, as well as her bid to be the first transgender governor in the nation.

“I stand before you as a beacon of hope. I never in my wildest dreams would have thought I would be standing before you here today,” Hallquist said.

Hallquist resigned from her job as CEO of the Vermont Electrical Cooperative to run for governor, winning the Democratic nomination with over 40 percent of the vote.

Hallquist said that her focus was not only on trans rights, but also on climate change and fighting what she called “the underbelly of bigotry,” involving race relations and other forms of discrimination — both in her home state of Vermont and at the national level.

Hallquist may very well be Vermont’s next governor come election day, and she is backed by current Virginia state legislator Danica Roem, the first openly transgender person to be elected to and serve in any United States state legislature. Roem, at 34-years-old, made a point to emphasize the importance of running a “people powered campaign” without corporate or lobbyist involvement, and the action it takes to be successful in the fight for a more representative Congress.

“In case you were wondering, yes, I am here to recruit you to run for office,” Roem said.

Roem highlighted the importance of representation, and how one of her main goals is to inspire kids to be the best versions of themselves.

“For every misfit, for every kid who was left out… they had won too,” Roem said.

Roem urged those that are passionate about politics, especially on Question 3, to not only show up to vote, but show up to take more direct action. Roem, the 13th District of Virginia’s representative, stood outside the UMass Student Union yesterday urging people to vote early and often, but to also do more. Knocking on doors, canvasing and phone calls are all ways to get involved, he said.

The discussion also emphasized the opportunity to early vote, which registered Amherst residents can do at the Amherst Town Hall this upcoming week. Voting opens at 8 a.m. and closes at 4 p.m. Monday through Friday, with Nov. 2 being the last day to early vote.

Out of state and non-Amherst residents may also mail in their absentee ballots to their registered districts to ensure their voice is heard, particularly on the Question 3 voter referendum if they are a Massachusetts state resident.

Isabelle Sarra can be reached at [email protected]