Trump’s words and actions make bigotry seem acceptable to many 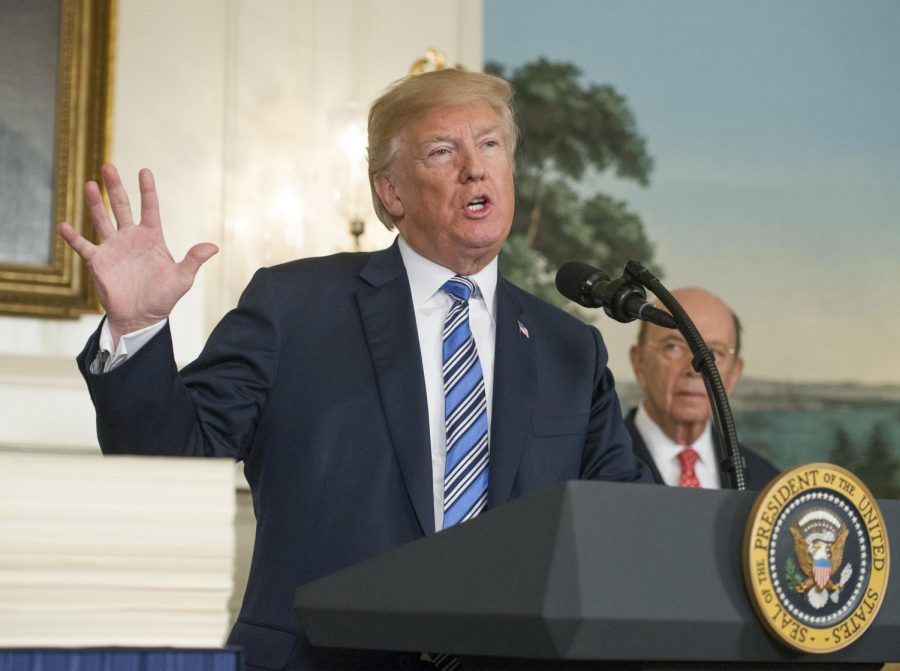 So, what happens when every speech and action made by the president is put on display for the entire country? Does it alter society?

It’s no lie that President Trump has said or done some controversial things. Whether they’re right or wrong in people’s opinions, much of his presidency has created conflict, as does any presidency in the United States. However, it’s not so much the controversy itself that affects the public, but the example Trump sets that created the controversy.

Throughout history, we can clearly see that the person in office has the power to heavily sway many citizens’ actions. Many historians argue that when John F. Kennedy was president, he revolutionized politics, changing how many people assessed candidates to come. It is often said that Kennedy swayed the majority of people to start paying attention to style, something that was foreign to voters before his election.

If Kennedy’s short time in office was able to sway the public so tremendously, how is Trump’s presidency affecting people right now?

Trump was a disputed candidate from the start; he had little political background compared to his competition, and was most well-known for his reality TV show and for being rich. Since being elected, he has flipped society upside down over and over again between public sexist and racist comments and a lack of support toward movements like Black Lives Matter and #MeToo. His presidency is often compared with those of Presidents George W. Bush and Richard Nixon, not because of political achievement, but because of the increase in protest they each caused.

If America’s president is running around fat-shaming women, trying to ban all Muslims from entering the country and claiming that it is a “a very scary time for young men” because of sexual assault accusations, what message is that giving United States citizens?

As the leader of this country, the president influences a lot of people. As a male president, one could rightfully argue that Trump influences men more than he does women. There may not be cold hard facts to prove these ideas, but there is a distinct correlation.

Here is a president who makes sexism and racism seem normal. Based on his actions, demeaning behavior toward women is typical for a man and discriminating against people of color is a regular thing for white people to do. This leaves everyday citizens exposed to his behavior at risk of following his actions without even realizing it.

On a smaller scale, the University of Massachusetts’ football coach Mark Whipple was recently in the news for a comment he made during a press conference. Whipple said, “We had a chance there with 16 down and they rape us,” when referencing how the opposing team treated his players during a recent game. Quickly after, students at UMass and many others criticized his remarks, and Whipple was suspended one week without pay.

I don’t believe that Mark Whipple meant any harm by what he said; I truly do not think he was making fun of, shaming or putting down rape survivors. However, I do believe that he only realized that what he said was wrong after the public’s reaction. Although he may not have meant to cause intentional harm, it’s concerning that a man leading a team of young men did not realize throwing around the word “rape” was a big deal from the beginning.

Here are two parallels that I see between President Trump and UMass’ football coach incident. Trump is a leader who is looked at by possibly every young man in this country. Mark Whipple is a leader who is looked at by an entire football team of young men. Trump has a lengthy list of offensive remarks towards sexual assault survivors, yet he remains the highest authority figure in the country. Whipple throws around the word “rape” as if it can be used casually. In both cases, a wide, impressionable audience is watching these two men, soaking in their actions.

Mark Whipple publicly apologized for his remarks and received consequences for his actions, showing the young men looking up to him that comments like his are never okay. The same hasn’t occurred for our president so far.

Every time Trump makes an offensive remark, it almost gives the green light for others to do so. After all, he is the president, and if he can do it, why can’t we all do it? He never receives any consequences, so why would I?

Did Mark Whipple not realize the strength of his remark because of President Trump’s history of sexist and racist remarks? Nobody can prove that as fact or fiction. But we can look at the world since Trump’s election.

More sexual assault victims have come forward, challenging some of the most powerful men in society. More and more protests supporting Black Lives Matter, the #MeToo movement and March For Our Lives happen all over the world. These things do not just grow from nothing. They arise from a cause, and Trump as one person is not the only reason people are demanding equality.

Trump creates an image for people to follow. If people start following in the footsteps of a president who shows little respect for minority groups, what will become of those followers? Will we begin to live in a world where prejudices cannot be fought against?

As the leader of the nation, America’s president shouldn’t be setting this example for all the impressionable young adults watching his every move. He should be encouraging equality and striving for a prejudice-free world that accepts all people. If he cannot provide that for our country, we must step up and fight for it.