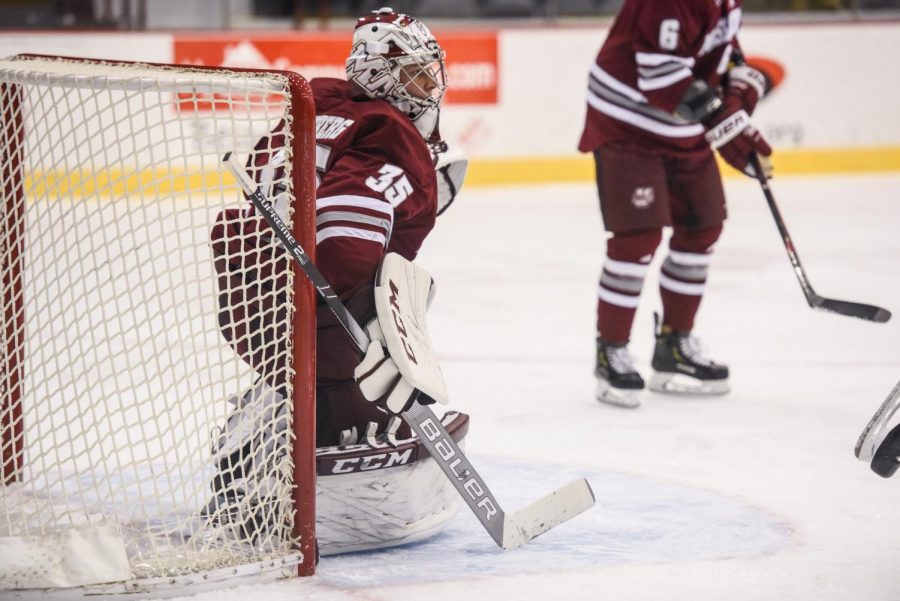 COLUMBUS, OHIO—Close but no cigar.

In the second leg of a back-to-back series with No. 1 Ohio State, the Massachusetts hockey team allowed two late third-period goals in its 3-1 loss Saturday night.

UMass (3-1-0) scored the game’s first goal on sophomore Mitchell Chaffee’s team-leading fourth tally six minutes into action, but the Buckeyes (3-1-0) knotted it back up at 1-1 just 13 seconds later on a Tanner Laczynski goal.

The second and much of the third period saw both teams trade quality chances but neither could finish until Ohio State converted in the waning minutes of the game.

With under two minutes left, Laczynski lifted a quick shot just over UMass goalie Filip Lindberg’s blocker with both teams skating 4-on-4, in what proved to be the eventual game-winner.

“I didn’t like the way we started,” coach Greg Carvel said. “We kind of got better through the middle of the game but we didn’t play well enough to win tonight, in my opinion.”

Using last night’s unexpected loss as fuel, Ohio State controlled the pace and much of the possession throughout the first 20 minutes. While the Minutemen only allowed one goal, it took them longer to establish their forecheck and offensive zone play than it did on Friday, which wound up hurting them in the long run.

“We knew we were going to get a pushback from them, [an] unhappy team,” captain Niko Hildenbrand said. “We came in last night and took one from them but that’s something we have to be prepared for and we have to know that that was going to happen.”

Lindberg weathered the Buckeye storm when it was at its peak in the second period, stopping 17 shots, and looked composed in the crease for the majority of the contest.

“I think he’s been very steady,” said Carvel. “He made a couple really big saves in the second period. The game-winning goal was a bit of a fluke goal, in my opinion. I’m definitely not blaming him on that.”

Shots favored Ohio State 39-36 when all was said and done.

Much like Philip Lagunov’s goal Friday night, Chaffee’s fourth goal came after a fortuitous bounce on Cale Makar’s errant shot from the point, which No. 21 swept into the cage for a 1-0 UMass lead.

Just 13 seconds later, the Buckeyes scored the equalizer off a long shot from Laczynski. The goal was reviewed but stood.

The ice tightened up in the second period and almost all of the third as no goals were scored until Laczynski’s second of the game late in regulation.

It appeared the two teams would need extra time to settle the affair, but Laczynski thought otherwise, striking just below the left hashmark at 18:38 of the third period.

Mason Jobst added an empty netter for the Buckeyes to earn a split with the Minutemen.

Despite splitting with the top team in the country, the Minutemen feel they let an opportunity slip away from them Saturday.

“The lessons are you play 60 minutes, and it’ll come down to one little battle,” Carvel said. “If you lose that battle, you lose the game so it just magnifies how important it is each guy in that room understands that anyone in there can win or lose the game for us.”