UMass hockey opens up 2018-19 campaign in the win column 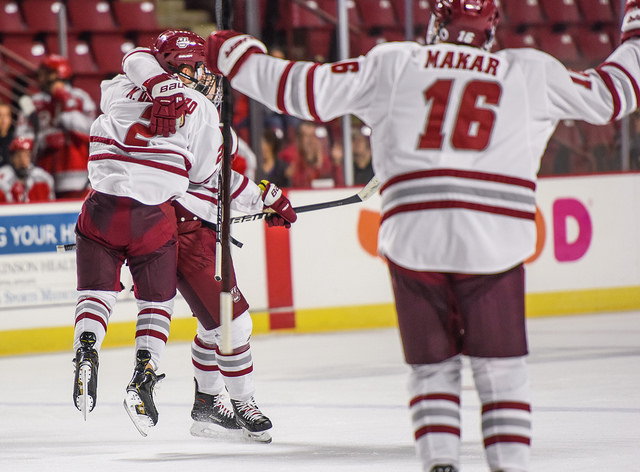 The Massachusetts hockey team has started its 2018-19 campaign on the right foot.

With a 6-1 victory over Rensselaer, the Minutemen (1-0) earned their first regular-season win of the year in front of large crowd of 4,157 at the Mullins Center, Friday night.

Six tallies counted as the most goals scored in a season-opening contest during the Greg Carvel era. Both Ty Farmer and Marc Del Gaizo scored their first collegiate goals while Del Gaizo and transfer Jacob Pritchard each registered three-point performances.

UMass capitalized on 4-of-7 man-advantage opportunities while the Engineers (0-1) were only successful on one of their seven power plays. The Minutemen were a perfect 3-for-3 with an extra skater during the first period. They only allowed a combined two shots on goal during all four second and third period penalty kills.

“We’re trying to be more aggressive this year,” Carvel said. “They had a hard time entering the zone on us and they did a good job too making it hard for us to enter on the power play. Last year, I thought we were too passive on the penalty kill, so that was another focus point for us tonight and we did a pretty good job.”

With the first three shots of the night belonging to the Engineers, UMass quickly flipped the script starting when two RPI skaters found themselves in the penalty box early, giving UMass 45 seconds with a 5-on-3 advantage.

Transfer Jacob Pritchard sniped one in the top left shelf past RPI netminder Linden Marshall with a full minute still remaining on the power play. Marc Del Gaizo netted his first goal as a Minuteman just over a minute later to take a 2-0 lead at the 12:10 mark.

“I think it’s really important to score on the first [power play],” Makar said, “and then obviously it gives every other unit after that a lot of confidence just in terms of being able to go out there and hopefully with no pressure, in terms of how we just got one. I think, like I said, things were clicking tonight and hopefully we can continue that.”

RPI’s lone goal came on its second man-advantage opportunity of the night after freshman Bobby Kaiser took a seat in the box for the second time in the first period. The puck took a wild bounce off the boards behind Murray and landed on the stick of Jakub Lacka, who batted it home to cut the UMass lead in half.

Mitchell Chaffee made it 3-1 after John Leonard bodied his way toward the slot before sending a backhand pass for the one-timer into the back of the net. Twenty-nine seconds later, Cale Makar split two defenders on his way to chipping the puck over Marshall for the 4-1 blow.

The second period saw five more penalties called on top of the original six that occurred in the first. After both teams took turns in the box for the first seven minutes, Farmer poked his first collegiate goal through a scuffle in front of Marshall after a Kyle Hallbauer slashing call, to go ahead 5-1.

Makar net his second goal of the evening early in the third after a Brett Boeing slap shot at the top of the zone rebounded off of Marshall’s pads right onto his stick. The sophomore sent it home for the 6-1 advantage.

Carvel was happy with what he saw from Murray, noting his calmness and sharp rebound control. The sophomore netminder finished with 27 saves, 10 of which he had to make in the third period.

“We’re going to have to see how mature this team is,” Carvel said of the team’s chances before venturing to New York on Saturday, “we’ll see what kind of leadership we have. Our leaders play the way they need to play and so the rest of the guys follow.