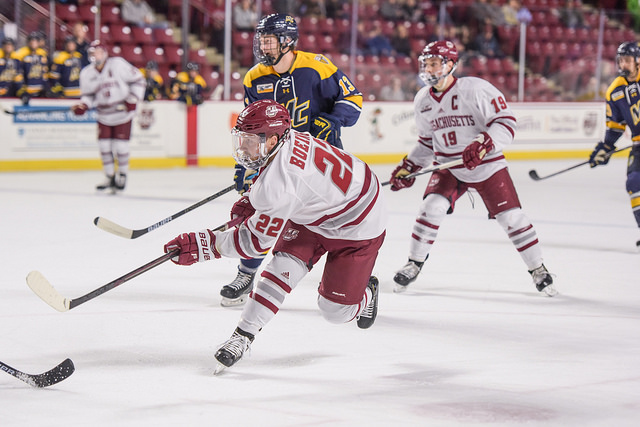 The senior forward scored two pretty goals in the No. 16 Massachusetts hockey team’s 5-1 victory over Merrimack and continues to prove himself as a viable bottom-six scoring threat for this year’s UMass (4-1-0, 1-0-0 Hockey East Association) group.

“I trained here all summer, and kind of been working hard to get those opportunities in the game, and just the summer work paid off, and I’ve been able to show it in the games,” Boeing said. “Obviously it’s a lot of excitement for the team, just the excitement heading into practice and being able to finally put some pucks in the net to help out the team is definitely nice.”

With under two minutes remaining in the first period and the Minutemen leading the Warriors (2-4-0, 1-1-0 HEA) 1-0, Boeing sped into the attacking zone and ripped a shot that went top corner, whisking past Merrimack goalie Craig Pantano’s blocker.

Then halfway through the third period, UMass was killing a five-minute major following a big hit from Cale Makar and Boeing struck again.

This time he won a race to the puck and took off, heading toward Pantano on a partial breakaway and, while shielding the puck on his right hip from the Warrior defender, feathered a quick backhand into the mesh before Pantano could get the glove-hand on it.

“I kinda had a step on the defenseman, and then he was on my left side and I didn’t know if I wanted to bring it to the left, if he would’ve got a stick on it, so I kept it on the backhand and the goalie dropped his shoulder and gave me a little spot,” said Boeing of his third goal of the year.

Before the weekend, coach Greg Carvel had said Boeing “had found his game” and was being bumped up to the third forward line because of his efforts. No. 22 swiftly rewarded his coach for believing in him with a two-goal outing on Friday night at Mullins.

“We’re asking all the guys to play faster north-to-south and he’s one of the few guys that’s actually doing it and getting rewarded for it,” Carvel said, noting Boeing’s speed. “Since day one back on campus, he’s shown us that’s he’s a different hockey player and he needed to be. He knew that and he invested a lot of time this summer to get in solid shape and it’s paying off. I’m very happy for him.”

That third line with Boeing at center finished with six points among that trio alone. The Mitchell Chaffee-Jake Gaudet-Oliver Chau line was the next closest with three points.

“I love it,” said Boeing of playing with Niko Hildenbrand and John Leonard. “I was here with Leno all summer and we have some pretty good chemistry, and Niko’s my roommate, I think all three of us gel pretty well.”