The forum was held by Pi Sigma Alpha and the SGA 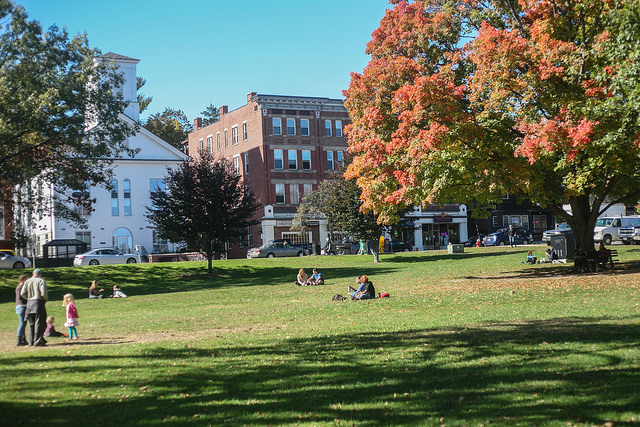 This past Wednesday evening, Thompson Hall at the University of Massachusetts was home to an informative showcase of 10 Amherst Town Council candidates running either at-large or for the jurisdiction of District 3 during the Meet the Candidates forum.

The forum was organized collaboratively by the Delta Lambda chapter of Pi Sigma Alpha and the Student Government Association of UMass. The candidates running at-large include Robert Kusner, Robert Greeney, Mandi Jo Hanneke, Alisa Brewer, Andrew Steinberg and James Pistrang. Candidates running for office in District 3 include Dorothy Pam, George Ryan, Stephen Braun and a senior here at UMass, John Page, who is currently in pursuit of a dual-degree in management and political science.

Candidates provided limited spoken-word biographies of themselves, and an array of questions began shortly thereafter.

Kusner is “interested in shaping the way that the town of Amherst governs.” He has served in the Amherst Select Board and is “responsible for the Norwottuck Rail Trail” that extends from Northampton to Amherst.

Kusner advocates for local sustainability and has also served on the town of Amherst Public Transportation and Bicycle Committee.

Greeney has lived in Amherst for 24 years. He has raised four kids, who all were educated within the Amherst Public School system, and he currently teaches physics at Holyoke Community College.

Greeney is focused on resolving the issues of student housing developments in downtown Amherst, which he believes to be “radically different” than the town’s primary consensus. He also considers the lack of affordability for housing in Amherst to be a main priority.

Hanneke has lived in Amherst since 2011. She has served in Amherst town meetings since 2012, being re-elected twice. She is focused on improving Amherst’s infrastructure, improving housing affordability and maintaining local sustainability.

Brewer has been involved in political service to Amherst since 2002. She has served on the select board since 2007 and is the current vice-president of the Hampshire County Select Boards Association. Brewer is focused on local economic spending, as well as its transparency.

He is focused on preserving Amherst’s quality of life, including that of its elderly services and public school system.

Pistrang has lived in Amherst since 1988, where his two children enrolled and ultimately graduated from the Amherst public school system. He has notably been active in the community theater for 25 years and founded an ultimate frisbee team at Amherst Regional Middle School to which he still coaches.

Pistrang is also an advocate for the renovation of Amherst’s elementary schools and the town library. Pistrang insisted that he works “calmly and effectively” on the issues that matter.

Pam currently works as an instructor at Holyoke Community College, having lived in the Pioneer Valley since 2010. In her talk, she noted her extensive experience in education and community leadership,

Pam also pledged to preserve the artistic and educational values that Amherst holds, in addition to updating public buildings and promoting sustainability.

Ryan has lived in Amherst for 31 years. “I like to get things done,” has been Ryan’s slogan for his campaign. He’s been involved in Amherst town meetings for 12 years, and has served on the board of the Pioneer Valley Habitat For Humanity.

Ryan prioritizes a “smart” growth of Amherst’s downtown district and a continuation of dialogue between UMass and the town of Amherst.

Braun, an Amherst resident since 2000, is an advocate for the financial support of Amherst’s deteriorating public buildings. In his allotted speaking time, he referenced the town’s elementary schools, fire station and department of public works, which he argued are in dire need of funding.

Braun has been a member of Amherst’s finance committee for three years and has additionally been involved with the Public Works Committee for six years. Braun also emphasized that he is willing to hear the public’s input on this difficult issue.

Page, a student at UMass, was raised in Pelham and has attended school locally. Page is the “son of a plumber and a prep cook.” Page has experience with hard work; working his way up to the position of student manager at UMass’ Berkshire Dining Commons.

Page is focused on the revamping of Amherst’s public schools, in addition to “responsible development” of its downtown district.

Amherst residents will be able to vote for Town Council members during the general election on Nov. 6.

Cameron Gibney can be reached at [email protected]