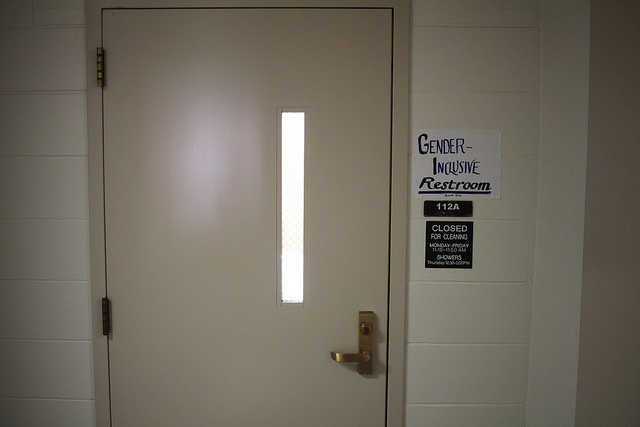 According to UMass News and Media Relations, the bathrooms are both located on the first floor of the residence hall. Baker holds both a gender-inclusive housing option for UMass students in the north wing and the Spectrum: LGBTQIA+ Student Community in the south wing.

For the past year, the University has been taking part in a pilot program, in which a temporary variance was granted to the school, allowing the bathrooms to be labeled gender-inclusive. At the conclusion of the program, the University presented a report to the Board of State Examiners of Plumbers and Gas Fitters on the success of the pilot program.

The press release said that “after reviewing the report, which found no negative, retaliatory or discriminatory issues reported in or around the bathrooms and that students on the first floor wanted to keep them gender-inclusive, the board granted the permanent variance on Oct. 3.”

The University was granted the temporary variance in October of last year, following backlash after the bathroom on the first floor was re-assigned from “gender-inclusive” to “women.”

The PowerPoint notes, “The University of Massachusetts, Amherst strives to create and sustain a campus environment that supports and values all members of our community. One aspect of creating a supportive environment is providing safe, accessible and convenient restroom and bathroom facilities. Students, staff, faculty and campus guests should use the restroom/bathroom facilities that correspond to their sex or gender identity, or may utilize gender-inclusive facilities that are labeled ‘restroom.’”

The report given to the board included student accounts of the bathrooms. According to Mary Dettloff, deputy director of UMass News and Media Relations, noted that the report included positive responses towards the pilot program from students.

Dettloff said via email, “Residence Life sought feedback from the students in Baker who were affected by it, and the students indicated overwhelming support for the change and had no reports of negative experiences associated with the inclusive bathrooms.”

Dettloff also noted that the variance only applies to the two bathrooms in Baker.

Massachusetts is set to vote on a significant piece of transgender legislation in the upcoming election. Question 3 of the set of referendums concerns a state law passed in 2016 that prohibits discrimination based on gender-identity in public spaces in Massachusetts. A “yes” vote keeps the law in place, while a “no” vote repeals the law. The question will be decided on election day Tuesday, Nov. 6.

Enku Gelaye, vice chancellor for Student Affairs and Campus Life, showed support and appreciation towards the granting of the permanent variance.

Gelaye said in the press release, “We are delighted to be able to provide these facilities on a permanent basis for the safety and comfort of our students, and we are thankful for the support of Gov. Charlie Baker’s administration and the thorough and thoughtful consideration given by the Board of State Examiners of Plumbers and Gas Fitters.”

“Working with the board, we have again been able to demonstrate the university’s commitment to maintaining a safe and inclusive learning environment for all,” she added.