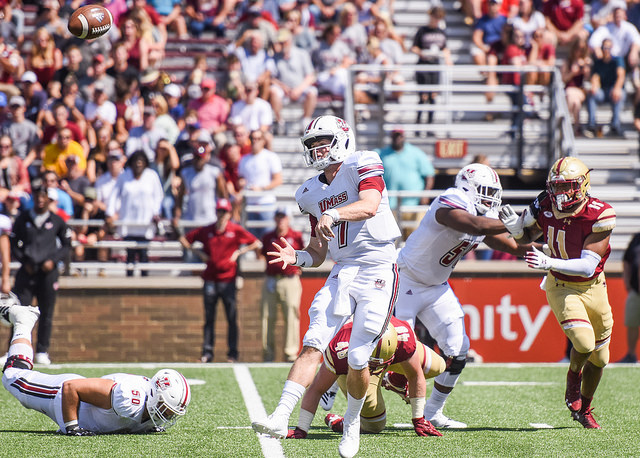 The Massachusetts football team jumped out to a 14-0 lead against Ohio but couldn’t hold on, falling 58-42, on Saturday in Athens.

Isabella and senior quarterback Andrew Ford — returning from an injury suffered against FIU — combined for an impressive afternoon as Ford finished 27-38 for 355 yards, four touchdowns and an interception for UMass (2-4).

Cornerback Isaiah Rodgers was busy on the defensive side as the junior made 13 tackles with a 55-yard pick-six early in the contest.

“We couldn’t make enough plays,” coach Mark Whipple told media after the game. “They have a good team and they were home, and I thought our guys were certainly ready to play because we went up 14-nothing. We just have to get ready for next week. We didn’t make enough plays to beat a team like that.”

A 39-yard connection from Ford to Isabella combined with Rodgers’ touchdown put the Minutemen up 14-0 less than five minutes into the game.

The Bobcats (2-2) responded on the next drive when quarterback Nathan Rourke found Papi White on a 19-yard touchdown connection.

Ohio scored three of the next four touchdowns, including a momentum-stealing score with just five seconds remaining in the first half, to take a 35-28 lead into the intermission.

The late Bobcats score was the sixth time this season UMass has allowed the opposition to score in some fashion with under a minute remaining in the first half.

Isabella added another reception touchdown — a 55-yarder — in the third quarter while freshman Samuel Emilus hauled in his first career touchdown in the fourth quarter but it wasn’t enough. Ohio tacked on two more touchdowns and three field goals in the second half, preventing the Minutemen from earning their first win on the road in 2018.

Ohio’s rushing attack proved to be the difference as the Bobcats gained 394 yards on the ground and scoring four touchdowns. UMass only earned 41 rushing yards in the game.

The trio of Rourke, Maleek Irons and A.J. Ouellette led the Ohio ground game. Rourke tallied 189 yards and one score and also went 23-32 through the air for 270 yards, three touchdowns and an interception. Irons compiled 14 yards and two touchdowns while Ouellette ran for 70 yards and a score.

“[We] just didn’t get any takeaways; they didn’t get any splash plays on defense,” Whipple said. “We needed to make one there at the end and that was the difference; we couldn’t do it.”