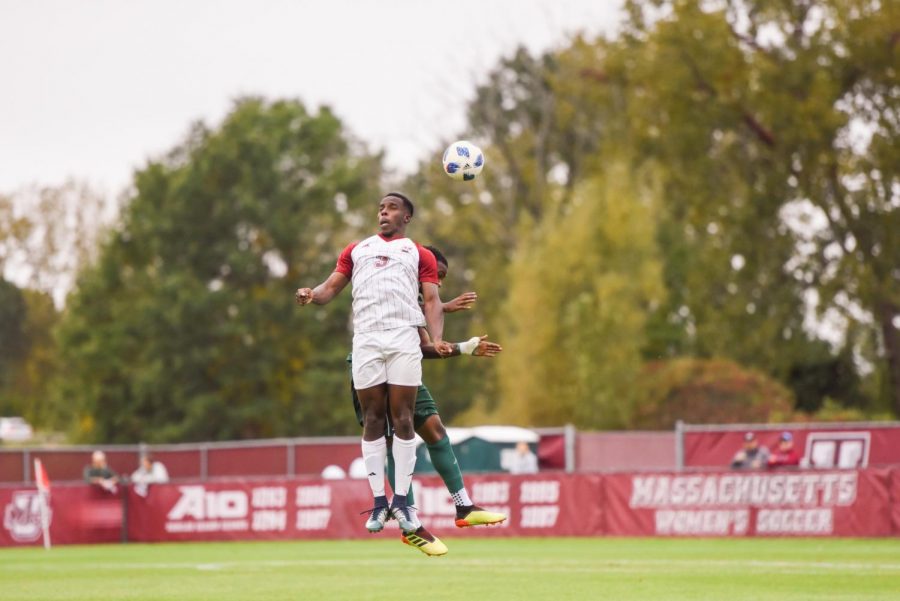 “It’s a really important result for us,” UMass coach Fran O’Leary said. “We felt an urgency to get points, to put points on the board against a George Mason team that has just beaten George Washington 3-0, so they’re coming in flying. I thought we dominated thoroughly throughout the game. Terrific goal by DeAndrae… We got a shutout, we got some goals, and most importantly, we got three points to start moving up the league table.”

UMass would open the scoresheet early, as Hanya put on a masterful display of skillful dribbling before putting in a low cross that was tapped in by Brown in the third minute. The 1-0 lead would hold until the 35th minute, when Hanya was brought down in the box and was awarded a penalty kick. Brown stepped up and scored with a strike to the left of the keeper to bring the score to 2-0.

George Mason (3-5-0, 1-1-0 A-10) had a few chances in the first half, earning back-to-back corner kicks and piecing together attacks. Despite the opportunities they created, it was not meant to be for the Patriots.

This was yet another game where UMass dominated offensively, putting up 19 shots for the game. The offense has been stellar in creating opportunities, and on Saturday these opportunities paid dividends. UMass used a strong counterattack to facilitate most of its opportunities up top, taking the ball and immediately moving it up the field to attack the goal.

“We defended well in the whole front half,” senior forward Jack Fulton said. “So once we defended the first front half, we ended up getting a lot more shots in, and as you can tell we got another few goals today.”

The Minutemen defended very well, limiting a strong George Mason team to just four shots while holding on to a clean sheet. Bolstered by the return of senior defender Konrad Gorich, the defense played well as a unit to force the Patriots away from goal. The ability to shift defense to offense played a huge role in the UMass attack.

“I think defense starts from the front,” O’Leary added. “It’s your front six first and then your back four sweeps it up with your keeper. It was a collective effort today and anytime the back four was called upon they snuffed out any danger. Their individual and collective defending was excellent today.”

It was an overall positive performance for UMass, which was coming off three straight losses.

The Minutemen will continue conference play when they take on rival Rhode Island at the URI Soccer Complex Wednesday at 7 p.m.