Minutewomen surrender three goals for the first time all season 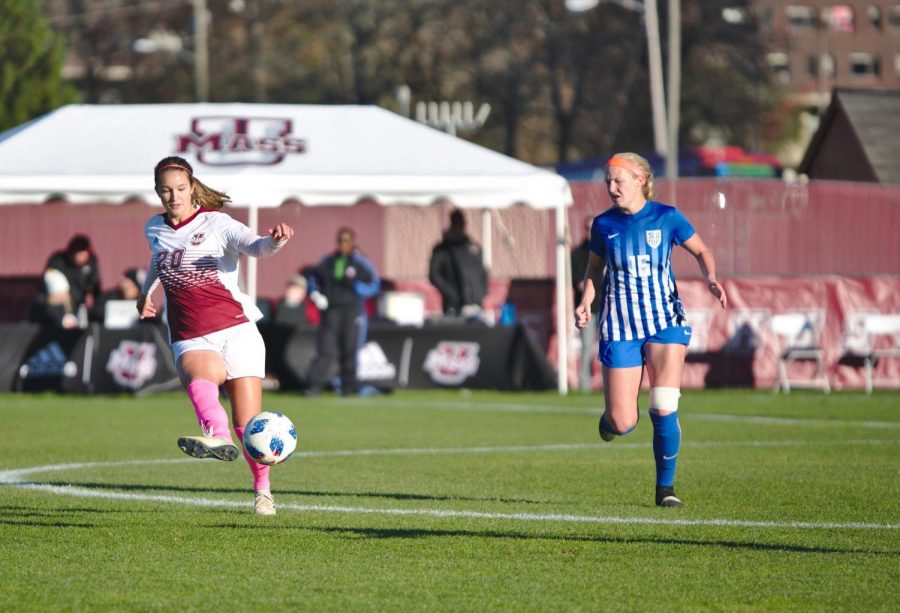 Hrefna Petursdottir (20) passes to a teammate during the game against St. Louis at Rudd Field Wednesday, Oct. 18, 2018.

A sluggish start on offense hamstrung the Massachusetts women’s soccer team, which suffered a 3-0 defeat at the hands of Saint Louis Thursday afternoon.

“We were inconsistent,” said first-year head coach Jason Dowiak. “I’m actually really proud of how some of the players that came off the bench came on and impacted the game and gave us some second life and some second chances, but we expect more from ourselves and we have to start better in games.”

The Minutewomen struggled to generate scoring opportunities at the start but began to get chances toward the end of the first half on shots from Signe Schioldan and Julia Taffuri. Unfortunately for UMass, only Schioldan’s was on net and it was stopped by the Billikens’ goalkeeper Olivia Silverman, who finished with six saves.

“I mean they’re a great team,” said Dowiak. “There’s a reason that they haven’t lost [in conference play]. They’ve shut out [11] teams now this year, but I think it was more our lack of energy in the beginning of the game, and then we got pinned in and it got a little more difficult to break that pressure. That being said, when we did break the pressure I thought we got good numbers forward. It was just the final moment that we struggled with today.”

The first goal for the Billikens came in the 13th minute when sophomore midfielder Olivia Petit scored her third goal of the season. She was at the receiving end of a corner from junior midfielder Courtney Reimer and headed it past UMass goalkeeper Peyton Ryan into the back of the net.

SLU added another off a corner in the 47th minute. Annabelle Copeland took a rebound and fired a laser over the head of Ryan into the top right corner for her second goal of the season. Reimer and freshman defender Isabel Burke tallied assists on the play.

The Billikens sealed the deal in the 87th minute when Maddie Pokorny took a ball played in from the left side from Isabella Palazzolo and buried it inside the far post.

“It can only get better,” said Dowiak. “We can only be more impactful in the final third. We did some really good things in certain moments against the best team in the conference. When we look at that as a team on video, we’ll be able to gain confidence I think from what we were able to do against them.”

The loss marked the first time UMass suffered consecutive defeats this season, while the three goals allowed were also the most for the Minutewomen this season.

The Billikens remain undefeated in conference play, while the Minutewomen will look to end their season on a high note against Dayton on Sunday afternoon before they head into the A-10 tournament.

Ethan Nash can be reached at [email protected] and followed on twitter @ethan_nash15.