Eight cards and 42 fouls were called in the game 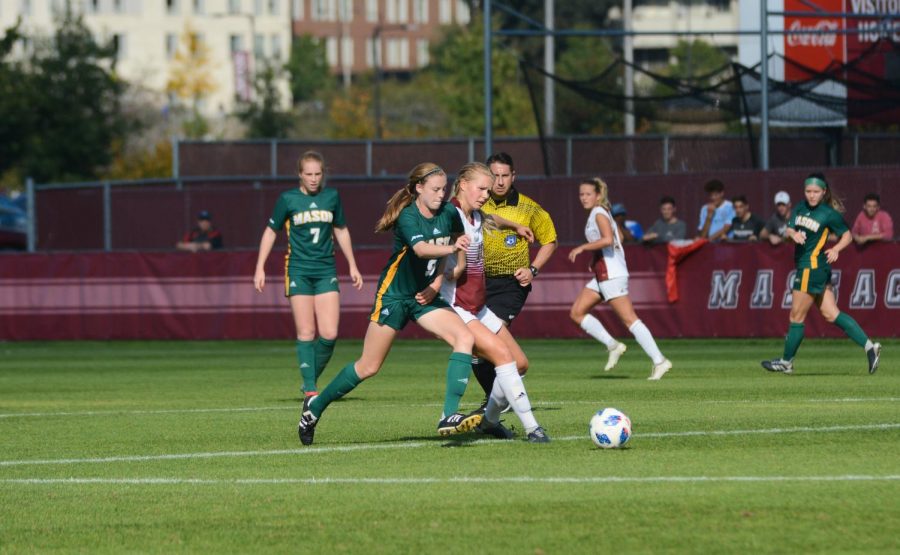 The Massachusetts women’s soccer team came up short in its matchup versus George Mason on Sunday, losing 1-0. The loss marks the first Atlantic 10 loss of the season for the Minutewomen (9-3-1, 4-1-1 A-10) and their first since their Aug. 24 defeat against Siena.

“They got it from out wide on the right side and took it down line,” said goalkeeper Peyton Ryan. “The girl kind of shot it from a weird angle across the line of the goal box. I dove for it, but it hit the post. I don’t know how she really got it in there from that angle, but it was really a good finish.”

By controlling possession in the first half, the Minutewomen were able to outshoot the Patriots nine to two. However, UMass was denied by the Patriots defense on three corner kicks and numerous free kick opportunities, keeping the game scoreless despite the lopsided shot total.

“They were a really good team,” said defender Dani Sclafani after the losing effort. “We came out strong in the first half, and unfortunately there were many turns with the referees. But I think our team did a good job of powering on. We got a lot of shots off. I think we all worked super hard and I’m very proud of what we had. There was one simple mistake, George Mason took advantage of it and it is what it is.”

Entering the second half, the UMass offense was unable to control the ball as much. After the Mason goal in the 47th minute, the Patriots defensive unit successfully denied the Minutewomen possession of the ball in the offensive third for much of the second half.

“We gave up possession too easily in the second half,” said coach Jason Dowiak. “Part of that was the emotions that were on the field and part of it was once we gave up the goal there was a little bit of nervousness to find the way. I think when we calmed down in different moments in the second half was when we were playing our best soccer, maybe of the year actually. We moved the ball well against a good team. I think the first half we were good because we were organized defensively, and they couldn’t figure us out and we were able to win balls back a lot and counter on them… It was just a matter of not having enough possession in the second half.”

The best offensive opportunity for the Minutewomen came from a corner kick in the 83rd minute. Forward Lauren Bonavita lofted the ball into the box, giving Rebeca Frisk a clear shot of the goal. However, Frisk’s shot lasered just north of the top left corner of the net.

Throughout the entirety of the game, questionable and inconsistent foul calls by the officials frustrated both sides of the ball. While both teams are known for their physical playstyles, 42 foul calls continuously slowed down the pace of the game and led to numerous stoppages in play, hindering the flow of the game. However, Dowiak doesn’t believe that’s the reason behind the loss.

“It was a battle between two teams that actually wanted to play,” said Dowiak. “And the nature, intensity and emotion of the game kind of took away from the soccer that could have been played today so it was frustrating. But I give my team a lot of credit. We created a lot of chances. We’re just in a little bit of a haze right now in that finishing element. Some good soccer, some frustration on how we deal with outside influences. Even up to the last five minutes we had some chances to be dangerous. We know the goals will come.”

The frustration between the teams and the officiating crew resulted in eight cards being shown throughout the game, including five within the last four minutes of the game and an 89th minute sending off for defender Jenna Thomas.

While things didn’t go their way on Sunday, the Minutewomen aren’t dwelling on the loss, but are rather taking it as a learning experience.

“It’s a bit of a wake up call,” said Dowiak. “We’ve had a couple of games now where we haven’t been as offensively productive. We’ve given up some goals which we weren’t doing early in the year. I’d rather we do it now than in the conference tournament, so we have to regroup and tighten the screws a little bit on what we’re trying to do. It’s really just fine tuning what’s working for us.”

“Well we had nine games where we hadn’t lost, so I think this is a learning experience,” said Sclafani. “We may not be perfect, we got the one loss out of our system but from now on we’re going to keep winning and keep on trying our best.”