The freshman fought all game before being rewarded late 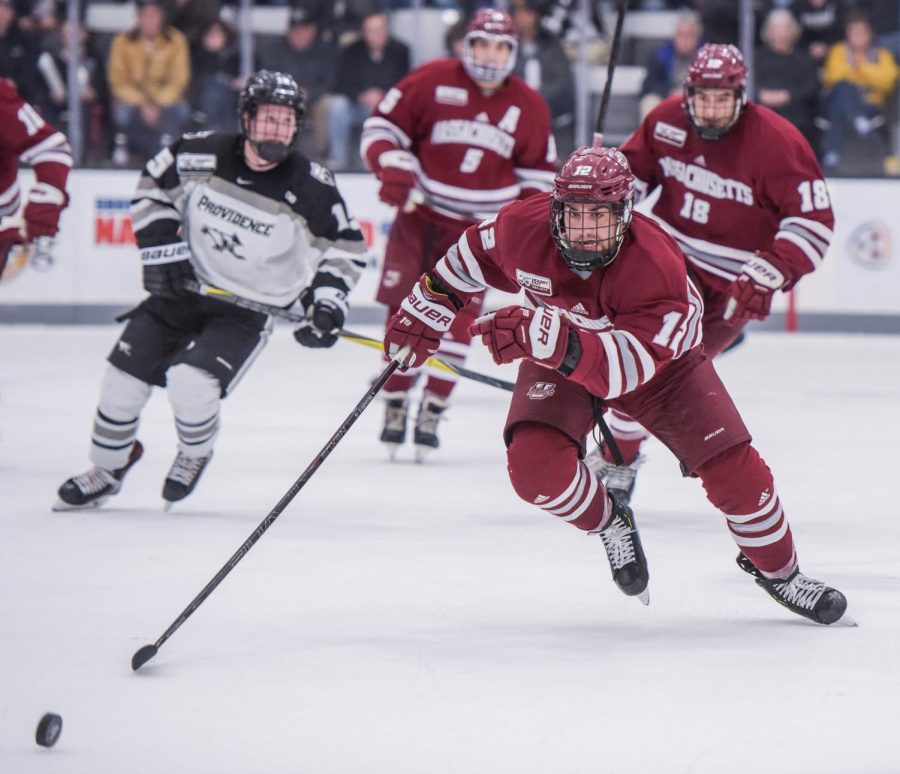 PROVIDENCE, R.I.—Anthony Del Gaizo is a battler. It could be mid-practice on a Tuesday afternoon or with under two minutes left in regulation in a tie game, the freshman forward is constantly working.

Late in the third period, fellow freshman Colin Felix sent a hard shot on goal from the right point, and after fighting for real estate in front of the net, Anthony Del Gaizo deflected the incoming shot into the cage for his second goal of the season.

“It’s good for him. He needs that,” coach Greg Carvel said. “It’s not easy when you’re a high-profile kid coming in as the MVP of the USHL and you’re playing on the 4th line; it’s quite a transition, but he played well tonight.”

Primarily on the fourth line to start the season, Anthony Del Gaizo hasn’t been in too many high-pressure situations. At Schneider Arena though, Carvel bumped No. 12 up to the Minutemen’s first line with Jake Gaudet and Mitchell Chaffee a few times and was tossed out there late in the game.

The 5-foot-10, 200-pounder rewarded his coach with the late-game tally by doing what he does best: battling.

“Good things always happen when you go to the net,” Anthony Del Gaizo said. “You’ve heard it a thousand times and you saw it here tonight, it’s awesome.”

Again, just like Thursday night, that goal doesn’t probably go in if we don’t have good presence at the front of the net,” Carvel added. “That’s where Anthony Del Gaizo will eventually become an effective player for us, because he’s just a gritty kid that finds ways to help you score and he did that on the game winner.”

Confidence has been mainstay with this Minutemen team as evidenced by their successive wins that saw the Friars (5-3-1, 2-2-0 HEA) scrap their way back into each game, before UMass scored late to snatch the victory. It’s a mindset that has been engrained into the culture of the squad and its transferred into the win column.

“I think this game is all confidence,” Anthony Del Gaizo said. “If you don’t in believe yourselves than you can’t get it done against anyone. I think right now, there’s not a guy in this room that doesn’t think we can win every single game.

Finishing the night with a goal, one shot and a + 1 plus-minus, Anthony Del Gaizo might be carving out a bigger role with the Minutemen moving forward. But even if he isn’t scoring game-winning goals, his game can almost always be traced back to that of one who out-wills the opponent.