Brett Boeing has been a pleasant surprise for UMass hockey 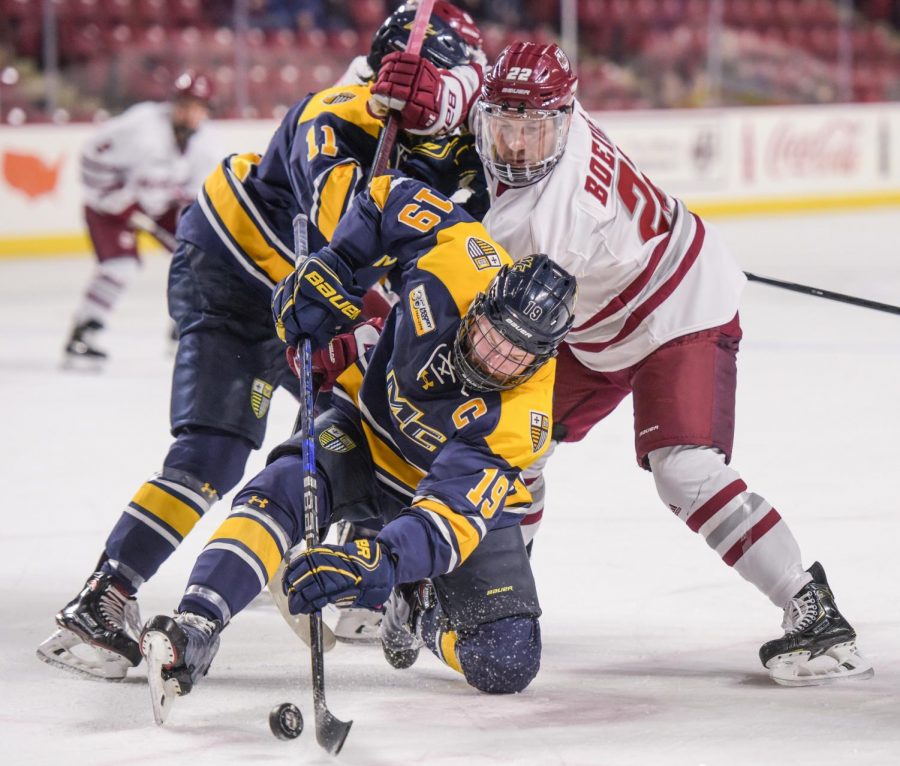 The first game that Brett Boeing played for the Massachusetts hockey team resulted in a win.

The senior is one of the few players who experienced being part of a five-win team. In fact, Boeing was brought in after Christmas break in 2017 with hopes that he’d bring the Minutemen’s compete level just a little something – anything.

“We were in dire straits back then, we weren’t a very good team,” coach Greg Carvel said after practice on Tuesday. “He had been a goal scorer in the USHL but he had been off for a while, I think his progression here started fairly slow.”

In the 18 games he played at the backend of the 2017 season, Boeing logged just one assist and ended the year at minus-17.

In his junior season, Boeing registered 11 points (three goals, eight assists) through 31 games, ending the season plus-4. He finished the season on a four-game point streak against high-caliber opponents Vermont and Northeastern in the Hockey East Playoffs.

“I think it’s just confidence. He’s always been able to shoot the puck, he’s got a great shot, he’s a smart player,” Carvel said on what Boeing has improved on most. “He can kill penalties and he’s very versatile, but every kid out there, if they don’t have confidence, it’s a tough game to play.

“You earn that confidence, you earn it in the weight room, you earn it doing all the extra stuff and – what we always tell our guys – you get what you deserve. He’s getting what he deserves,” Carvel said.

This past summer, Carvel let the entire team know that trainer Clayton Kirven would be available at school to workout with anyone that was willing to. Boeing took full advantage.

Living in Amherst for the majority of the summer, Boeing trained for his senior season. John Leonard, who ended up getting drafted by San Jose mid-summer, moved in with Boeing and the two worked toward the 2017-18 season.

“I had big-time meetings with Carvel at the end of last year,” Boeing said, “He kind of just wanted me give the extra effort and stay here all summer. I worked on my strength in the gym, worked on my conditioning and then some early success brought confidence and it just kind of brought it together here.”

Through the first 12 games this season, Boeing has produced eight points already (four goals, four assists) and currently sits at an impressive plus-10. The 5-foot-8 forward stands at the top of Hockey East tied for a conference-high two shorthanded goals.

His contribution this year has had immense impact, especially his two-point performance against then-No. 1 Ohio State. Carvel says he has been one of the biggest surprises this season and feels fortunate that he’s peaking “at a good time.”

“I think just bearing down on chances,” Boeing said about what he focused on the most this off-season, “last year I had plenty of chances to tip the puck in the net and I just couldn’t find it for whatever reason. Then, I started to find it at the end of the year and now kind of brought that on to this year and I’ve been able to put the puck in the net.”

Boeing says that being around the team is all the extra motivation he’s needed to push himself in his final collegiate season. He was grateful for his extra time with the freshman players to get to know them and “bring that chemistry into the season.”

“It’s night and day,” Boeing said in reference to his first season with UMass to his last, “obviously the success, you’re not satisfied, you want so much more and it’s crazy to think that it’s turned around that much. It’s awesome to see.”