Farmer’s game-winner thrusts No. 9 UMass past No. 4 Providence at Mullins 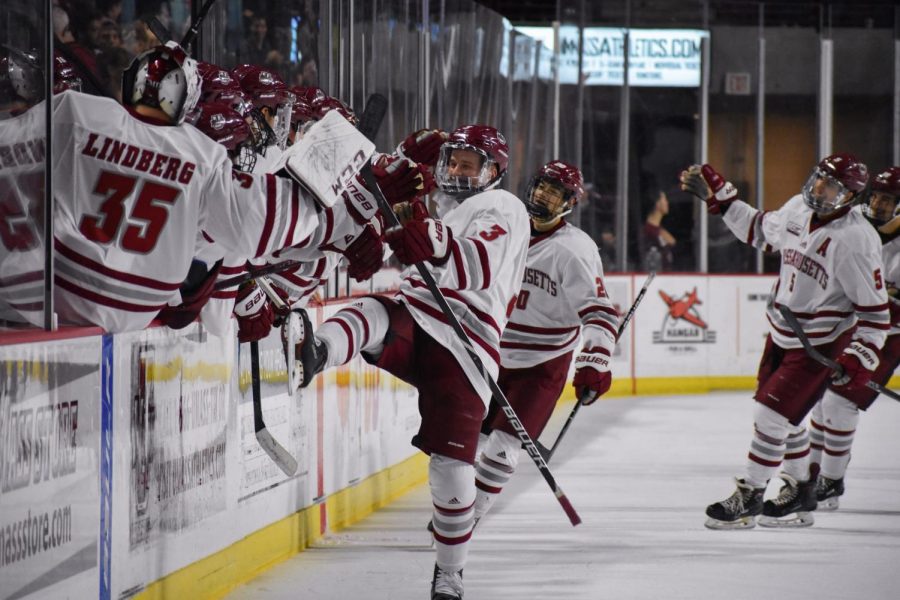 After Providence stormed back from a two-goal deficit on Thursday at the Mullins Center, the Massachusetts hockey team looked to the late-game heroics of freshman Ty Farmer for the win.

The game-winner comes as Farmer’s second of his short career, which couldn’t have come at a better time for the UMass group that was in jeopardy of letting a key win slip through its hands.

“It’s a good feeling,” Farmer said of scoring the game-winner in the hyped-up matchup. “We worked hard all week. We knew it was going to be a major game for us, especially just a team like those guys, they bring it every night and they know how to play the game so this was big.”

The Minutemen jumped on the board under three minutes into the action, when Marc Del Gaizo scored his fourth of the season. Seven minutes later, John Leonard doubled the lead on the break.

Around the 11-minute mark of the second, the Friars came storming back and pulled within a goal on the power play. In the third, another Providence goal with the extra skater tied it at two.

With time winding down in regulation, the Friars had a handful of chances to complete the comeback victory, but UMass goaltender Matt Murray made sure to keep things tied at two.

Sparked by their netminder in the crease, the Minutemen went to work, and as they have done on several occasions just over a month into the season, and took the lead with under a minute to go.

After Oliver Chau passed the puck along the end-line, Mitchell Chaffee slid the puck up along the boards, where Farmer was waiting to unleash the biggest wrist shot of his collegiate career.

“Providence was doing a good job of clogging up the net, and so Ty did a great job [to find a shooting lane],” Minutemen coach Greg Carvel said. “He got it off his stick real quick and we had a great [net-front] presence. This is just a group that is really unified. This is a good group of kids. They believe in each other and they battle for each other and that stuff goes a long way.”

Carvel also noted how well the group of young defensemen performed against the potent Friars.

“We were pretty confident that those guys were going to help us offensively, they are really gifted kids with the puck,” he said. “Our concern was defensively, and tonight especially, that’s as hard of a game there is for a defenseman. They play fast, and they get everything to the net, so it was a real big test for those guys tonight and they passed. I thought they did a great job.

“I think we just out-work and out-will teams,” Farmer noted. “We play a full 60-minute game, so I mean that’s kind of hard to beat when you do those things and you play a complete game.”