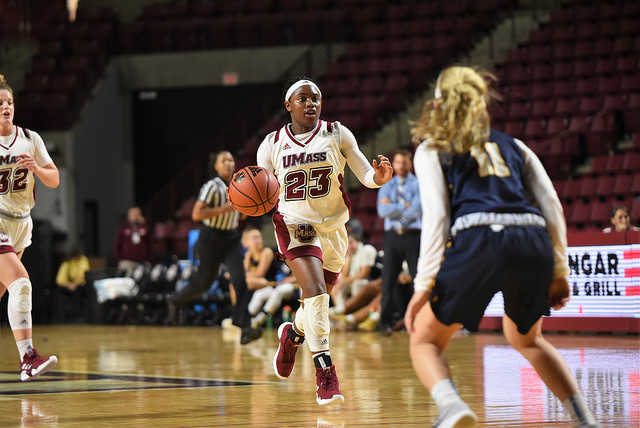 But in the end, it was the play of junior forward Hailey Leidel and sophomore guard Bre Hampton-Bey that powered the Minutewomen (3-1) past UTRGV (2-3), 74-70.

Leidel put up a game-high 28 points as well as a game-high 13 rebounds. Hampton-Bey scored 18 points with 10 assists. Two double-doubles equated to an elated Tory Verdi after the game.

“You look at Hailey’s numbers with her double-double – 28 (points) and 13 (rebounds) – it’s one of the best games of her career,” said coach Verdi. “She stepped up when we needed her to knock down 4-of-9 threes. Just made some huge shots down the stretch when we called her number.

“And then obviously we were in a lull and [Hampton-Bey] ended up taking the game over and did some really nice things so its important. We need some of that point production and we were able to get it from them.”

Leidel and Hampton-Bey’s best performances materialized in the second half. Hampton-Bey scored 10 in the third quarter and Leidel had 19 of her 28 points in quarters three and four. Even more impressive was Leidel’s 12 consecutive points to go from down one with 7:08 left in the fourth to up nine with 3:52 left in the game.

For the Minutewomen, the game had its fair share of adversity. There were seven lead changes in the first quarter alone and they trailed 40-32 heading into halftime. Verdi’s message remained constant throughout such a battle.

“We just had to keep fighting,” Verdi said. “It’s every possession. We communicated that to them. I’m just really proud of our kids and our players. I felt like we grew here tonight. In the past when you face adversity like that it’s hard to bounce back and I thought we did a great job of bouncing back from that early adversity we faced here tonight in the first half.”

What helped the Vaqueros take an eight-point lead into halftime was shooting 80 percent (4-5) from beyond the arc in the second quarter. The Minutewomen’s ability to come back from it came from a complete team effort that Verdi harped on multiple times after the game.

“It says that they’re competitive,” said Verdi. “They have that competitive spirit and that togetherness. We stuck together and got it done down the stretch because I thought we did an unbelievable job of communicating defensively and we did a better job of boxing out and rebounding and keeping them in front of us defensively.

“That’s what we have to continue to do. It’s all those little things as far as loose balls and making contact when boxing out. We did a really good job of that down the stretch.”

The only other Minutewoman to put up double figures was redshirt freshman center Anil Soysal with 12 points. Verdi’s been very impressed with her growth through the first four games.

“[Soysal’s] grown,” Verdi said. “Everyone has to remember it’s going to take some time. She’s young. She just turned 18. She hasn’t played in 2 years so this is her fourth game in the last several years. It takes times. She’s getting acclimated and comfortable. She scored some big baskets for us and we try to ice her on the block. I thought she did a nice job for us.

More importantly what I’m impressed with is she almost played the entire game. She played 33 minutes. For her to go out and do that for us is huge.”

With Tuesday night’s win, the Minutewomen find themselves on a two-game win streak heading into a mini Thanksgiving hiatus. Verdi’s goal for the team is clear-cut and straightforward.

“My whole thing is we just got to continue to get better,” Verdi said. “I thought against Central Connecticut we didn’t compete for forty minutes. Tonight, we did. And again, even though we beat CCU, I felt that it was really ugly like we didn’t show our true character. And when people watch us play, I want people leaving the Mullins center saying ‘wow, that team works hard’. Nobody can take that from you. And I want our players to represent the University of Massachusetts the right way and feel really proud about that they witnessed on the floor.

“Whether we win or lose, you can still play hard and I thought today just the fact our players were resilient and just tough down the stretch and made some huge plays and stuck together instead of imploding. I’m just really proud of their effort and their want to.”

The Minutewomen don’t play until Friday when they travel to the three-day Brown University Turkey Tip-Off from Nov. 23-25. First game is against Bucknell on Friday at 6 p.m.