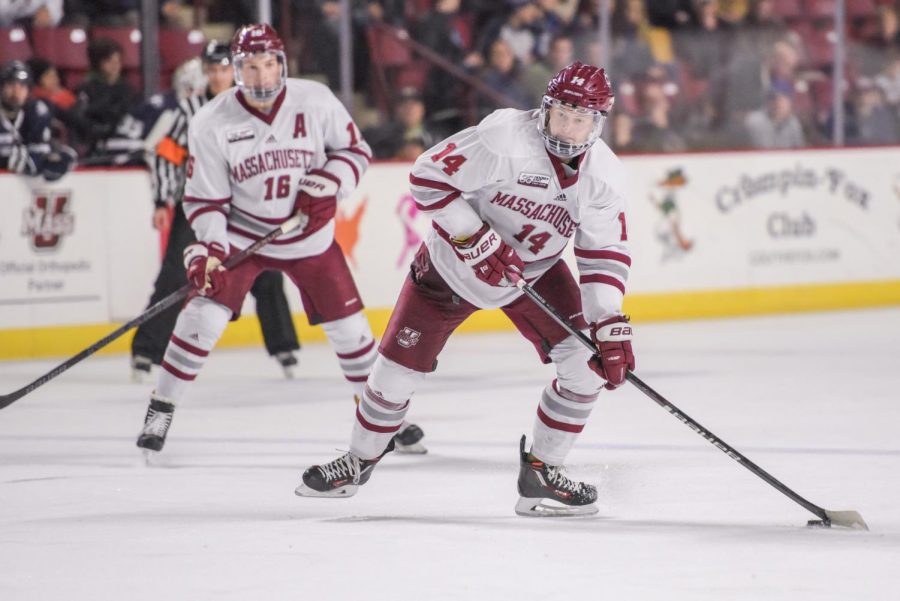 When the Massachusetts hockey team acquired the skills of senior forward Jacob Pritchard over the summer, the coaching staff was introducing a much-needed playmaker to the power play unit.

No. 4 UMass (10-1-0, 6-0-0 Hockey East Association) had trouble scoring goals on the man-advantage last season, but Pritchard’s arrival from St. Lawrence has made a big difference.

Entering Sunday’s matchup against New Hampshire at the Mullins Center — a rematch of a 5-1 Minuteman win on Nov. 3 — the left-winger led Hockey East in power play points with eight.

In the aftermath of the 4-2 victory over the Wildcats (1-6-3, 1-3-2 HEA), Pritchard bumped that total up to eleven with a goal and two assists on the power play unit to solidify the season sweep.

On Pritchard’s only goal that got the game rolling just under seven minutes into the action, Cale Makar sent a soft wrister on net where Pritchard was setting a screen and waiting to find the shot.

With his stick held vertically, the forward found the puck and created a deflection for a 1-0 lead.

Over the rest of the game, Pritchard set up John Leonard and Mitchell Chaffee on the advantage.

“We had a pretty good game,” the senior said after the sixth-straight Hockey East win. “I thought we moved the puck around really well and we got the puck back when we had the opportunity.”

Even while boasting the best point production on the power play in Hockey East, Pritchard spoke mostly about the strengths of the overall unit, rather than focusing on his own accolades.

“I think we just play off each other very well,” the forward said. “I guess I’ve been fortunate to get some points out there, but I mean, we all want to score goals and it’s been working for us.”

For UNH coach Mike Souza, shutting down the top-ranked UMass power play was a big focus after the Wildcats lost to the Minutemen two weeks ago, but their penalty kill did not perform.

“You have to stay out of the box against these guys,” Souza said. “We’ve been pretty good on the penalty kill, but we did not execute today. You can’t give a talented team opportunities like that.”

“They just make plays,” he added. “They have skilled guys and they’re able to keep plays alive, and [make] little plays in little areas…talented kids can do that and [UMass] has a talented team.”

While Minutemen coach Greg Carvel was pleased with the showing that his power play unit put together in the win, he credited some of the group’s success to “puck luck” in the offensive zone.

“We got the puck to the net and all three were kind of bouncing around in front of the net and we were able to bang them in,” Carvel said. “The first goal in particular, we score that because we retrieve the puck, make a play at the net, good retrieval getting back, and get it to the net. Second one, Pritchard does a great job taking it to the net and doing the turnaround to create basically the empty net goal for Leonard.”