Letter: UMass Hillel is no longer following an open-door policy 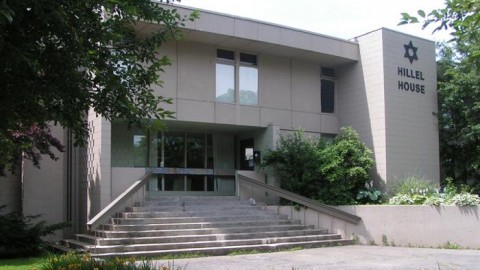 By Opinion and Editorial Staff

On Oct. 27, 2018, there was a shooting at a synagogue in Pittsburgh during the Saturday morning prayer service. I pray for the 11 who were murdered, their families and the community.

Since the shooting, there have been more and more anti-Semitic incidents, and my heart breaks with every single one. From Brooklyn to Las Vegas to the University of Massachusetts, where neo-Nazi stickers were found on campus last Wednesday, hate is closing in. Being a Jew myself, I feel my community shrinking. It feels like there is nowhere for us to turn. So, we turn to ourselves and organizations that can support us.

UMass Hillel is a place for Jews on campus of all walks of life to come together. Its mission statement reads, “We empower students through the vitality of Jewish life to cultivate purposeful, healthy lives and relationships that better our community and world.​” It is a second home, a safe haven of sorts, for many students.

But in the wake of the Pittsburgh shooting and other recent hateful incidents, UMass Hillel has chosen to lock its door.

UMass Hillel has always been an open and warm place for all students on campus, not just Jewish students. Its open door has allowed students who know nothing about Judaism to come and learn about it. But now, that open door has been shut in fear of something happening – in fear of an unwanted person being able to walk in. In many ways, the building now represents the opposite of what it has meant to myself and my community in the past.

One of my favorite things about UMass Hillel is its tolerance and acceptance. It is a place for dialogue and discussion. It has always been somewhere to go in and out of, to grab a snack, to speak with staff, to meet a friend. Suddenly, after Pittsburgh, I can’t do any of that so easily.

I actually had a conversation at the end of the last academic year with the building manager at Hillel, and he told me that they were already considering implementing new security and monitoring in the building due to the growing climate of hate. However, he also understood how it would change the community atmosphere. At the time, I sympathized with where he was coming from, but could not fathom the reality of it. Now, I have to.

Anti-Semitism is often overlooked in the grand scheme of all the hate in this world. Jews are often seen as white, privileged and well-off. While many Jewish people have been lucky enough to leave the depths of their past­ – pogroms, the Holocaust and other discriminatory acts ­– many Jews, both white and of color, still face the hardship of their identity daily. Anti-Semitism is a part of modern-day culture, and it must be analyzed and stopped.

I have been a target of anti-Semitism, and I know members of my community that have been as well. We need to educate and be tolerant. We say that “Hate has no home at UMass,” yet my community, along with many others, faces hate all too often. Let’s come together as a campus community and support, respect and learn from each other.

Editor’s note: The headline of this article was edited post-publication to avoid confusion about the status of UMass Hillel on campus.