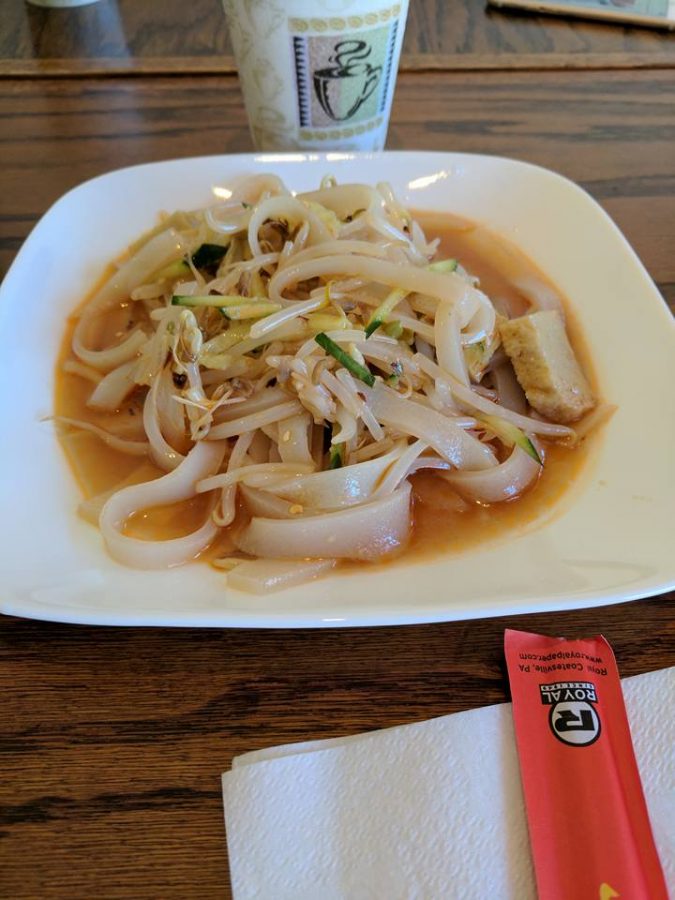 Upon entering Lili’s Restaurant in downtown Amherst, I immediately got smacked with déjà vu. Similarly to the nearby Pita Pockets, featured in my previous review, nearly everything about this Xi’an-style Chinese restaurant is understated. The walls are unadorned, save for a mirror and a 10-item menu which is handwritten on 8.5 by 11-inch sheets of paper. Seven tables populate the tiny room, and two companions and I were lucky enough to crowd around the sole empty one. This extreme minimalism speaks to an unwavering confidence in the food. Everything here is about warm service and bold flavors.

Lili Jia, the restaurant’s namesake and owner, runs an impeccably tight operation with her husband Nait Wang. They work in close quarters, but they move as if performing a graceful dance, each person perfectly in time with the other, never missing a beat. Wang takes orders and makes conversation with customers while Lili and several other women tend the stove and painstakingly craft noodles by hand. They take advantage of every square inch of space they have, demonstrating complete knowledge of their kitchen. It looks like they could cook with their eyes closed.

We order about half the items on the menu, since it is so concise. As we wait for our food, we watch the crew work. If making Biang Biang noodles is an art, the team here has perfected it. We were mesmerized as we watched them stretch the dough to the ideal length and then dip each raw noodle in a pot of boiling water. At the counter, Wang added the accoutrements to the bare noodle dishes, scooping up pork and spices from small medal tins, ladling them into our bowls. The turnaround time was quick: after a few short minutes, Wang brought everything to the table.

It became clear from the first bite that the crew at Lili’s are masters at layering flavors. The handmade Biang Biang noodles with stewed pork exploded with a garlicky spice. While the accompanying stewed pork was especially rich, it never treaded into unctuous territory. A certain delicacy remained; the resilient and springy noodles provide lightness in each bite.

Among the other items we ordered: homemade pork dumplings with leeks and chicken with hot peppers. The dumplings were cloud-like, and the pork wrapped in a thin sheet of dough wasn’t overly dense. The chicken, cooked with Szechuan peppers, was mightily spicy without becoming unbearable.

Among the other highlights were the menu’s two soup options. I ordered the Saozi noodle soup, and my friend ordered the stewed pork soup (if it isn’t clear already, pork acts as the sidekick to the noodles in almost every dish). As we were about to dig in, Wang came to the table and explained the difference between the two. The Saozi was made from a vegetable-based broth, and the stewed pork soup was made from, well, a pork based broth made with bone. Wang said he prefers the Soazi. I was glad he’s on my side. The broth wasn’t dissimilar from that of a vegetable pho, but the thick Biang Biang noodles added a whole new dimension of flavor and texture to the dish. The chewy noodles absorbed the vegetal essence of the broth, which lended them a gentle, ethereal flavor.

The stewed pork noodle soup, saltier, meatier and spicier, was the richer foil to the Saozi. Both, however, came filled with more Biang Biang noodles. As much as I had already waxed about these noodles, they completely shifted character based on the dish in which they were included. They are chameleons. In the spicy pork soup, they soaked up the fatty and peppery broth, becoming different creatures from their counterparts in the Saozi soup.

Lili’s is emblematic of the numerous small, hole-in-the-wall restaurants that populate downtown Amherst, each one filled with delicious surprises. These restaurants are the passion projects of their owners. Jia and Wang have created something truly beautiful, a culmination of years of practice and dedication to the art of Xi’an Chinese cooking. They are true masters of their work, and they have established Lili’s as one of the brightest spots in downtown Amherst.

Rating: Five Stars out of Five

Jacob Abrams can be reached at [email protected]