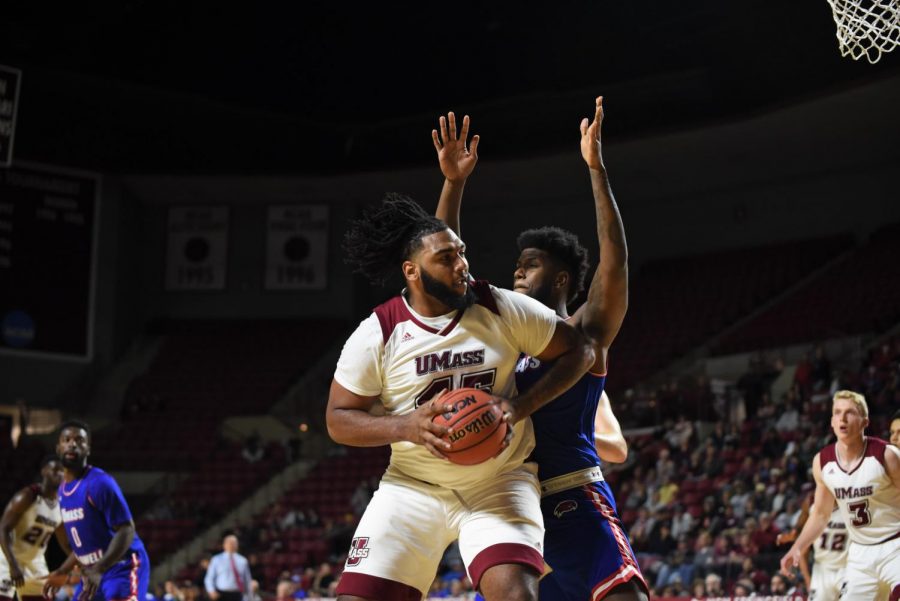 It didn’t take long for Rashaan Holloway to announce his return to the basketball court.

On his first post touch of the season, the redshirt senior used his large frame to get position on the left block. As soon as he caught it he felt the weight of UMass Lowell’s Connor Bennett on his left shoulder, and quickly spun to his right.

Bennett had no other option but to foul, but the big man was able to power through and spin the ball high on the other side of the rim, where it graced off the glass and fell through the net for his first points in over 11 months.

“I didn’t go in looking to make shots, I went in there to just get my feet wet,” Holloway said. “It’s the first game, my first game against a different opponent, it felt good to see it go in.”

Holloway’s season came to an end far before he envisioned a year ago, when he was ruled academically ineligible for the second semester, his season done in January.

Getting back out on the court Tuesday night and hearing his name called in the starting lineup was a relief.

Holloway, who had missed time in the preseason due to a hamstring injury, played 19 minutes in the debut, scoring six point on just five shots in UMass’ 83-75 victory over the River Hawks.

Where the big man really dominated was on the glass. When the ball was in the air, there was nobody on Lowell who could move him off his spot, as Holloway grabbed a team-high 11 rebounds, three of which came on the offensive boards.

While Holloway was pleased to get a couple baskets early in the game, the area he was really trying to showcase himself was on the defensive side of the floor. He has put an emphasis all offseason on improving his pick and roll coverage, as teams try to bring him out into space and guard smaller, quicker players.

The work showed, as Lowell was unable to expose him during the game. With two minutes to go, and the River Hawks trailing by six, Lowell tried getting Holloway switched onto leading scorer Christian Lutete.

Holloway got into position, moved his feet and forced Lutete to step on the line and out of bounds, making a big defensive stand to preserve the UMass lead.

“Today was more of a defensive game,” Holloway said. “I wanted to prove myself on defense and prove I can play the pick and roll and do the right things and I feel like I did a good job today.”

As the season progresses and Holloway gets into better game shape, his minutes should increase from the 19 he saw tonight. McCall knows that once he gets on the floor more, he will need to find different ways to get his center touches in the post.

“Gotta feed him,” McCall said. “Feed the big fella. When you look at my play card it has ‘actions for Rashaan.’ As a coach I have to be creative in finding ways [to get him the ball]. I went to him late in the game, I thought he made a good post move but I think he gets picked on for his size sometimes. I wanted him to get a touch early to get him into the flow of the game.”