The pseudo-profundity behind the Whipple controversy

Crude commentary is not the same as condoning violence 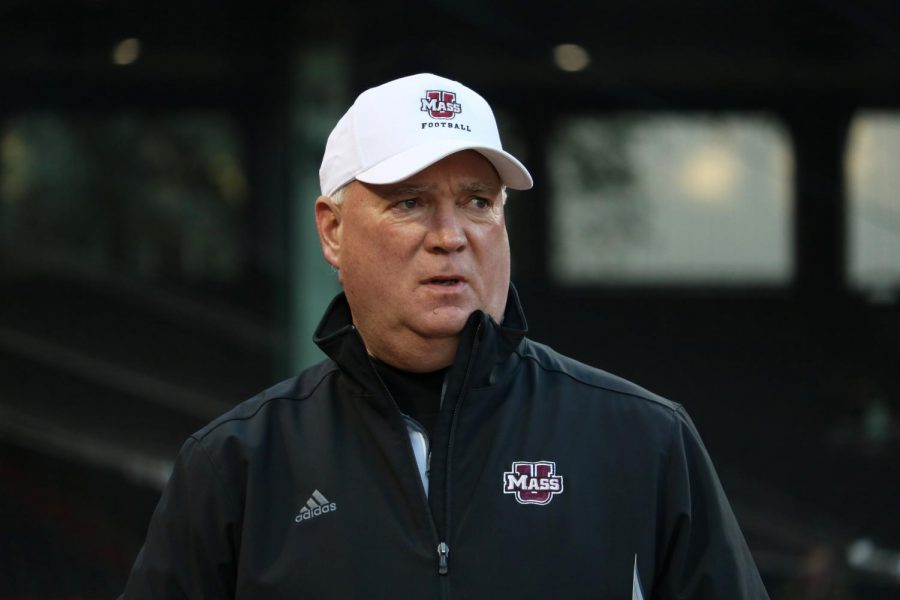 The University of Massachusetts parted ways with head football coach Mark Whipple on Tuesday after another disappointing, losing season, and just one month after the controversy surrounding his use of the word “rape” in a post-game commentary. “We had a chance there with 16 down and they rape us, and he picks up the flag,” Whipple said following a loss against Ohio University, which he described as “the worst game I’d been a part of from an officiating standpoint.” The coach was quick to offer a public apology, at which point I expected the matter to be put to bed. Whipple, however, faced a week-long suspension without pay and was put through sensitivity training. The affair caused such a stir that it was picked up by major publications such as ESPN, the New York Post and the Associated Press.

Whipple, who was in the fifth year of his second stint with the Massachusetts football team, had a far-from-perfect second tenure in Amherst, going 16-44 since returning in 2014. Nonetheless, he boasts one of the best records in the program’s history, having led the Minutemen to five winning seasons, including the 1998 Division I-AA national championship, though all were before the Minutemen moved up to Division I-A in 2012.

But despite his more recent struggles, Whipple’s contract was renewed this past April. Since he was terminated with two years still remaining on his contract, that termination cost UMass a $500,000 buyout. I can’t help but wonder if, during the decision-making process, last month’s scandal was more than the “isolated incident” that Athletic Director Ryan Bamford made it out to be.

In the wake of Whipple’s suspension, several opinion articles were written condemning his actions and lauding the University for disciplining him. The commonality I noticed across these articles was they were fueled by a certain pseudo-profundity. In other words, they rested upon claims that, at first look, seem profoundly enlightening, but on a simple second reading reveal themselves to be quite untethered to reality.

One such article in the Massachusetts Daily Collegian, written by Sophia Corsetti, claimed, “[Whipple’s] comment perpetuates a culture in which people think that it is okay to assault others… Comments like Whipple’s only perpetuate rape culture…What it does show is a lack of sensitivity for the norms that encourage actual rape. When the term is misused or joked about, especially by someone in a leadership position, it encourages an apathetic attitude toward rape.”

It’s easy to get swept up in the illusionary profundity of such statements. But stop and ask yourself, is there any evidence backing these conclusions that Whipple normalized, encouraged or tolerated sexual assault or in any other way perpetuated rape culture? Whipple did not condone rape. He did not even joke about or make light of an obviously heinous crime. All he did was use a crass figure of speech, arguably in the adrenaline of the moment. One has every right to find his actions distasteful and expect an apology. And apologize Whipple did, seemingly sincerely and non-defensively, “I am deeply sorry for the words I used on Saturday to describe a play in our game. It is unacceptable to make use of the word ‘rape’ in the way I did, and I am very sorry for doing so,” he said. To then accuse him of “encouraging an apathetic attitude toward rape” is beyond me. Would every Taylor Swift fan, when they utter “kill me” or “I died” as a figure of speech be subsequently accused of “perpetuating suicide culture?” or “encouraging an apathetic attitude toward murder?” We know these are figures of speech and we treat them as such.

Corsetti wasn’t alone in adopting such a stance. An anonymous student athlete wrote a letter addressed to Coach Whipple making the following case: “A football coach tells his team that they were raped by another team’s play. These examples all matter…These all take away our validity and instead validate the culture that condones sexual violence – the culture that says what happened to us is normal and it was probably our fault… Coach Whipple, when you use that word like that, you erase centuries of gendered violence.” Here too, the illustrious profundity of these claims masks the hollowness of their logic. Where, in Whipple’s utterance did he indulge in blaming victims of sexual assault? That’s quite an assertion. And what actions can one individual possibly take to “erase centuries of gendered violence?” To reiterate, the issue here is not that the author took offense to Whipple’s language; they have every right to do so. But to haul baseless, hyperbolic accusations at him is unnecessary, not to mention counter-productive. As linguist John McWhorter pointed out, “It’s one thing to find views repugnant. It’s another to claim that—to hear them constitute[s] a kind of injury that no reasonable person should be expected to stand up to. That’s theatrical because it’s not true.”

I think journalist Ruth Mode said it best that, “the days of women feeling compelled to stay silent in the face of sexist remarks or conduct are thankfully on the way out. Hear something, say something, by all means, but for goodness’ sake, let’s maintain some sense of proportion and civility as we figure out how to pick our way through the minefield of modern gender relations.”

When we tack superlatives onto every situation that displeases us, we end up rendering these words powerless and the audience numb. If everything is rape culture, then essentially nothing is. There still exist communities around the world where, if a woman or girl is raped, she is killed by her own relatives for having “brought dishonor and disgrace to the family name.” This is what the perpetuation of rape culture looks like. This is what emboldening the perpetrator looks like. A football coach making crude commentary is hardly the same. Words matter. Let’s use them judiciously.