UMass gets blown out in season finale against Georgia 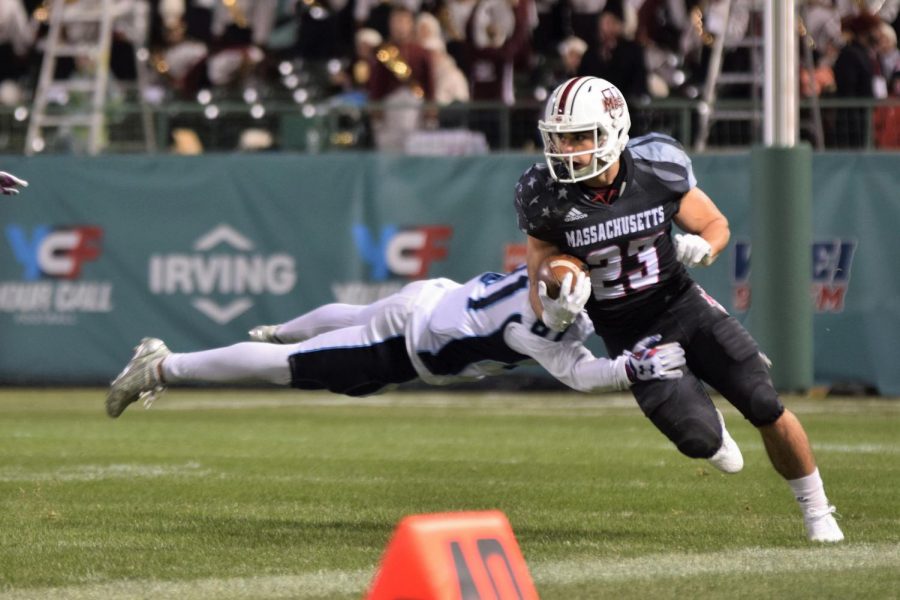 The Massachusetts football team has played Southeastern Conference foes in the past two seasons, and have played them decently, hanging around into the fourth quarter and putting a scare into teams from one of the toughest conferences in the country.

Taking on No. 5 Georgia was a completely different task compared to those in the past, though. The Bulldogs (10-1) proved why they are one of the toughest teams in the country, dominating UMass (4-8) from start to finish in a convincing 66-27 victory.

“They’re big and physical, Kirby (Smart) said that to me before the game,” UMass coach Mark Whipple said via the WEEI broadcast after the game. “We knew that on tape. They have speed. They have big guys that can run. We got caught on defense with some really poor angles and we haven’t faced anyone like that. BYU’s a really good team, but when you can get an extra step, that’s what makes a difference.”

The Minutemen defense had no answer for an explosive Georgia offense, who scored touchdowns on nine of its 12 drives. In the three drives they didn’t find the end zone, one resulted in a field goal, one was a muffed punt and the other was the final drive where they took a knee to end the game.

After a UMass punt on the first possession, the Bulldogs needed just three plays to score, as Tyler Simmons got past the Minutemen front seven for a 49-yard touchdown run. After another UMass punt, Georgia drove down effortlessly, capping it off with an Elijah Holyfield five-yard score.

The Minutemen took advantage of a rare Bulldog mistake, as they took over at the Georgia 16 after the fumbled punt and Marquis Young went in untouched from five yards out to once again make it a one score game.

That would be the closest UMass would get. Justin Fields found Riley Ridley for an 11-yard touchdown on the next Bulldog drive, then Jake Fromm found Simmons streaking up the sideline for a 71-yard touchdown.

“Our guys battled in there,” Whipple said via the WEEI broadcast. “We got the stop after the interception and held them to three points. When it got up to 28 it was kind of tough. I’m really happy with the way the guys battled.”

After a Minutemen field goal, Georgia would add two more scores before the half. Fields, the reigning No. 1 high school prospect in the country, evaded a sack and dashed in for a three-yard score. The next drive saw him throw a strike to Mecole Hardman, who had a step behind the UMass defense, for a 57-yard touchdown.

With the game in hand, the Minutemen were able to open up the playbook in the second half, and Andy Isabella took advantage. The senior wide receiver came into the game 15 yards short of the UMass single-season receiving yard record, and broke that in the first half.

Aside from breaking the single-season record, Isabella had his eyes on the UMass career receiving yard record, set by Tajae Sharpe.

It looked like a long shot heading into the game, needing 179 yards, but the senior had it going in the second half against a stout Bulldog secondary. A flea flicker in the fourth quarter left Isabella wide open, and quarterback Ross Comis put it on the money for a deep catch.

Isabella then used his speed to weave in and out of the defenders, eventually getting the edge and going in for a 75-yard score.

On their next possession, Comis found Isabella for a 45-yard touchdown on the final play of the season for the Minutemen offense, giving him 15th catch for 219 yards, breaking the UMass career record.

“I thought Ross settled in in the second half and did some really good things. Andy was great all year. He was a little healthier. They have a good football team. They’re playing for the SEC championship have a chance to win the NCAA national championship. They have talent and they’re deep.”