A win would set a program record 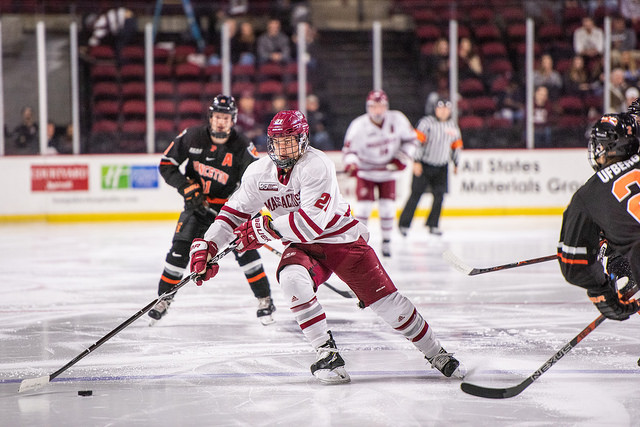 History will be on the line Friday night when the Massachusetts hockey team hosts Connecticut at the Mullins Center.

The Huskies enter the showdown on the opposite end of the spectrum as they are losers of four straight, yet they still present a challenge for UMass to achieve its record-breaking mark.

“Watching them, they’re young and [have] energy and they do have some size, but they compete hard,” coach Greg Carvel said. “I tell our guys all the time, ‘watch how many times at the end of the game the losing coach says well we just got outcompeted tonight’. That’s always our biggest concern is that we don’t get outcompeted. Princeton was a team that I was a little more worried about their skill because they got some high-end guys, than I was about their compete. UConn I’m worried about their compete because they play hard.”

It’ll be the first of three meetings this season between the two squads as well as the seventh and final Hockey East contest before the semester break for the Minutemen. UMass currently sits in first place in the conference standings with 12 points. UConn slots in at eighth with five points.

Sophomores John Leonard and Cale Makar lead Hockey East in scoring with 16 points each while Mitchell Chaffee’s eight goals puts him in a tie for fourth with Maine’s Chase Pearson.

“We know that they’re a hard-working team and very physical,” Mario Ferraro said. “It’s Hockey East, it’s what you’re going to get. We know that UConn, they obviously have that skill, but they definitely work hard and we have to make sure we’re very poised with the puck and we play strong defense because defense leads to strong offense for us and that’s a big area of our game that we have to focus on for this week.”